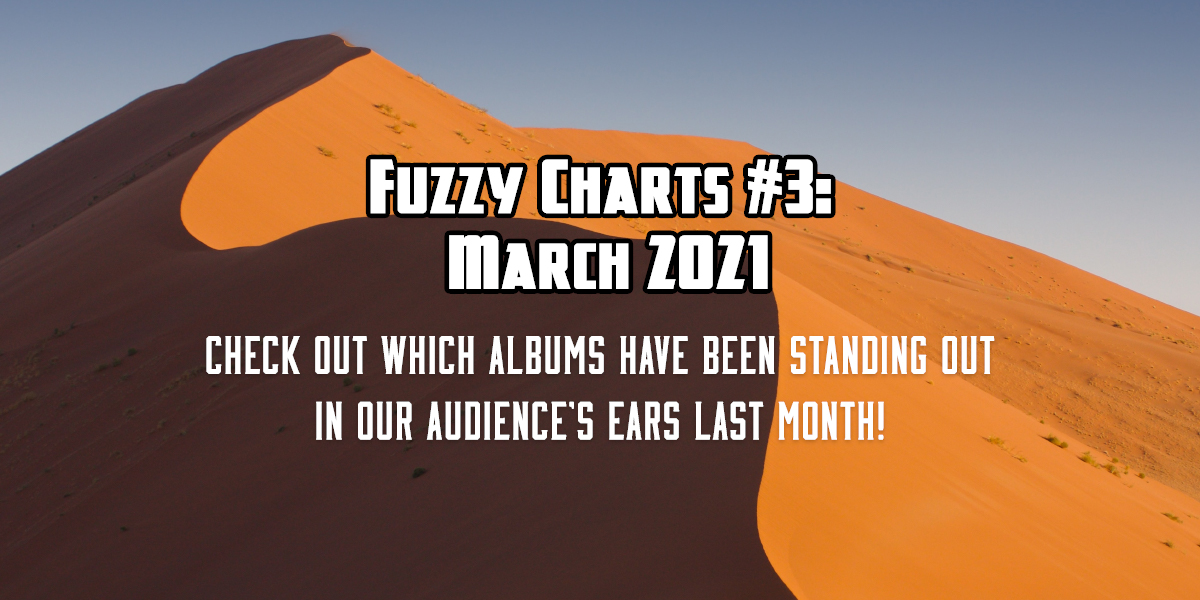 The return of the Fuzzy Charts

As it could have been expected, Greenleaf stayed way ahead the whole time, a few others climbed quickly to the top, but it stayed quite interesting all along, even with two weeks to vote this time, there were some ties that only got sorted in the last couple of days!

This time, Mr. Cromlech gave me some help, since he wanted to review one of the albums and liked another 😉

Here is the result of this poll, for the month of March, enjoy!

After keeping 11 for the final list last month, and with the results of this month, I think I’ll stick with a top 10ish from now on. You might be familiar with at least some of them since I reviewed two of them on More Fuzz last month 😉

The Space/Kraut jammers from Kiel are quite consistent in their relentless rhythm of quality releases. Completely centered around space, by the title of the album or the tracks, Kombynat Robotron do what they do best here, drift totally free in the deep open space, depicting their explorations in music. With three tracks on one side, giving a bit of a pressing feeling to it, and one long jam on the other, this record perfectly express the different shades of Kombynat Robotron. Let yourself go and enjoy all the nuances from the forward-motorik-driven hypnotic space thrusts to the tripped-out ambient drifts through the void.

“The Quatuor from Mantova, Italy, released their first EP in September 2018 and a few tracks since then. They synthesize a high-powered obsessional lo-fi space-rock through a clever collage of influences from different decades. With steady foundations hailing from the late 60s psychedelia to 70s acid space-rock, and unfaltering krautrock, they also indulge copiously in punk and post-punk energy, as well as modern psych-garage-punk atmospheres.

It’s quite a crazy mix, resulting in a brilliant and highly addictive cocktail of sonic pernicious obsession.”

Two months in a row in the Fuzzy Charts for the Aussies, at the same position, with a Live recording this time! I guess we’re all in need of some live vibes and cope up how we can, and for sure, those kinds of live recordings help to do so. This one is showcasing some of their newer tracks, from the L.W. album out last month, along with some classics and other handpicked cool tracks from their discography. (The whole live is available on their YouTube channel btw) In case you’re worried about the sound, being a live recording and all, stop now, the Aussies sure like lo-fi, but they also pay special attention to put out only quality stuff, and this one doesn’t break the rule.

It also brought to my attention this cool bootlegger platform where you can find lots of other lives and a couple of other albums, like the Polygondwannaland, the first record they bootlegged in 2017, which started this idea I guess.

I knew Eyehategod by name even before I found our fuzzy scene, so I guess they are quite well-known. But this is the first album by them I heard and what drew me in was the thick guitar tone and heavy riffage.

Of course, you gotta love those gritty vocals of Mike also if this gonna be something for you. And what you get is a simple sound but it’s a really fuckin’ heavy & aggressive sludge metal album to blow of steam with.

I remember digging their 2017 debut LP, Asheran, though it’s been a while I haven’t given it a spin. Four years later, Dvne presents us with its follow-up, Etemen Ænka, a 66minutes beast of an album. Mixing perfectly Prog, Post-Metal, and Sludge through their sci-fi prism, this Scottish Quintet is not really a band that’s easy to listen to, their music is dense as fuck, full of details and challenging content for our ears.

That’s exactly why it’s such an interesting band, their composition is astounding in so many ways… The use of different vocal styles, clean, distorted, male and female, is quite enthralling. Musically, they take turns between Progressive build-ups, harsh passages, and aerial sections with such a brilliant mastership. I love how they play with the contrast between them, and even more, how it seems to naturally flow, and how it intertwines, in different ways each time, always leading to a glorious apex.

“Shem is a collective of musicians with a mission, transcending the psychedelic subgenres and influences into a mind-bending super mix. They blend marvelously nagging old-school krautrock, frenetic original space rock, and glorious improvised modern space rock, along with other psych, noise, and drone elements.
[…]
The groove inferred here is so prominent at times I can feel it grabbing my guts. I can’t help but picture myself dancing in the middle of the night, in front of the stage as a great festival day ends with these amazing crazy vibes, dissolving into the starry night appeased and uplifted at the same time. “

This one is quite interesting, a split between the Irish trio Slomatics, an established band by now, showing since 2004 how heavy one can be, even without a bass, and Ungraven, what started as a solo project of Jon Davis (from Conan) recently joined by Fudge Tunnel‘s bass player and Tuskar‘s drummer.

I wasn’t familiar at all with Ungraven, who handles the first side of this split, until writing this, and I’m not so surprised when I hear the sound, on the edge of my comfort zone. Prepare to be completely obliterated by those mean and angry vibes coming to get you. The sound is filthy as hell, melting together Industrial, Noise, Post-Hardcore, and Black Metal into a sort of orgasmic sludge that only leaves a smoking trail and scorched earth behind.

If you’re familiar with Slomatics, you should love the other side, and if you aren’t, you’re in for a treat. Slow and heavy as hell, with nice layers of synths and theatrical vocals giving it a kind of epic vibe and a bit more space to the sound. These Irish walk their path and imprint their pace in your brain. The atmosphere they skillfully weave will transport you, gathering the pieces left of you from the first side, only to tear you apart between the heaviness and aerial side of their music, yielding to its epic nostalgia.

Sonic Mantras is the second album by this awesome psychedelic rock band from Australia. And what I really dig is the mystical vibe they conjure up with a warm bass tone and droney guitar riffs. You also get organ sounds spread throughout the album which add another layer to the mystic. The sound is quite laidback and reminds me of the last Dead Meadow album, especially with the chosen vocal style and just like that album, this is a perfect sound to chill outside on a sunny day.

The opener and last track are my favorites and the ones that stand out the most to me.
Goodbye Gatwick Blues starts slow and then the wobbly bass sound comes and I just love that tone. It’s present throughout the track while the guitars drift on top and add an oriental & mystical vibe.
On Sonic Dhooom they finish off this album with a sitar for a tripped-out raga moment. It very much keeps to their core sound during the first half and on the latter take the fuzz away and let the sitar shine and let you drift away towards a serene dreamlike state.

Just a bit more than a year after their second album, Under Acid Hoof, reviewed here by Mr. Void, the Greek doomsters of Acid Mammoth brought us a new offering with Caravan. It’s a great 5-tracks 40-minutes full-on Occult Doom record, paying homage to the sacred forefathers as the title suggests. As fitting with such a band name, they still have that “haunted delirium” signature that Mr. Void was describing last year, developing stomping rhythms and fuzzy riffage all over, in harmony with their bewitching vocals.

It’s clearly not the most original record out there, but as far as Doom albums go, what we got here is pretty spotless. Just enjoy those superbly efficient slow jabs coming at you, crushing the desolating tundra on its way. The sound is perfectly mastered and every passage and nuance hits at the exact right time. Acid Mammoth is growing to be one of the classics in this genre, and I’m looking forward to witnessing it live, for that’s what this music is made for, melting in the fuzz pouring out of the speakers, breaking your neck with each beat of this amazing drummer.

While waiting for that to happen, this LP will probably be one of my go-to when in any need of hypnotizing doom vibes.

Three years after Hear The Rivers, the Swedish kings are back with a new opus. Still in their perfectly mastered iconic style, they keep pushing further, refining everything that brought them where they are. Holappa‘s riffs are more blazing than ever, Hällagård‘s voice still as mesmerizing, while Frölich and Olsson keep kicking asses at laying down the perfect rhythm.

With Echoes from a Mass, I have the feeling they really worked on the production, boosting their sound to give it enough space to reveal its epicness properly. It’s their fourth album with this line-up, and it’s a pleasure to be able to feel the strong dynamic these guys got going on. The whole album stands perfectly together, with that amazing tone and good old Heavy-Blues vibes all over, maybe even more present than usual. The progression through the ten tracks is spot-on and really brings to light all the nuances the Quatuor worked on, adding bits here and there to their sonic territory.

It’s not so easy to keep producing albums for two decades like them, and they manage to keep it interesting while staying honest to their identity. Hats off gents!