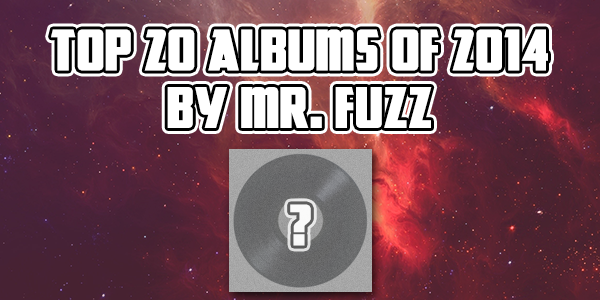 Each and every end of year the interweb of music blogs sees an enormous quantity of “TOP Albums of X Year” articles. Of course I’ll follow the move, as it’s a great way to get a retrospective on which bands did really came up with an outstanding album, both in terms of music quality and creativeness.

It’s also interesting to compare with my music friends which albums they chose to highlight. It often gives a great indication on what genres they’re more into 😉

So without further ado, here are my TOP 20 Albums of 2014. Those are the ones that made me headbang instantly at the first note, the ones that gave me goosebumps and a thrill in the spine because the music is so emotionally strong, the ones that just don’t sound like anything else I heard before, yeah simply the ones that resonated and will resonate with me for a long time !

As you may know it’s a fuckin’ nightmare to put them in order of preference, so as I often work with “the first intuition is the better”, I cut short on this painful decision and only did a few readjustment with my first list.

The best Sabbath’s covers I ever heard, with an original funky style, it grooves so much ! Especially the “Planet Caravan” one… WOW !

Polish Doom at its finest. What the last Electric Wizard album should have been. (reviewed here)

Another Polish band, but this time in the purest tradition of Desert Rock. Full of killer riffs and psychedelic parts !

Tony Reed and his mates crafted a wonderful album, making it another must-have Heavy Rock record in your music library. And they also just KICK ASS on stage when I saw them at the Freak Valley Festival and at the Hellfest !

My favorite Greek band didn’t disappoint with this marvelous release. Nurturing a bit more their own sound, it’s with a great pleasure I came back several times in the year to this one 🙂

13. Uma Thurman – I Am the High Fucking Priestess

A Stoner-Metal release I enjoyed a lot during the whole year, the riffs are colossal, I urge you to listen to that monstrous Croatian band !

The US Riffs Gods strikes again, nothing new, but they just have that gift to craft the perfect fuzzy riff to make your headbang instantly with each song !

The fastest growing band I ever seen. Discovered the power of this duo in the beginning of the year before they put out this album and got all that fame. Now they are playing in the biggest festivals, in the biggest venues, opening for the nowadays biggest bands (Arctic Monkeys & Foo Fighters), so just one word : Congrats ! Special mention to the bassist use of his instrument, it’s just so clever !

Awesome delivery from these Frenchy, it’s so captivating. They can be proud of creating their own sound, recognizing it instantly, in the first seconds of a song. That’s where you see the real talent.

The best Retro Rock album after Graveyard’s Hisingen Blues. The vinyl rotated a lot on my turntable !

The first album was my first Heavy Rock love. This 2nd one is even more beautiful and full of heavy emotions. (reviewed here)

Missed that one when it came out but got back to it at the end of the year, I dunno why I didn’t give it more attention !
Instant spine thrill with the first song that lasts during the entire album !

My most played vinyl of the year. A real gem in the Psychedelic Jams realm.

15 tracks of majestic Heaviness Groove. These English dudes have that heavy & punkish attitude that infected me right from the beginning. When listening to this album I just instantly turn into a headbanging machine each and every time.
I’d die to see them live !

1. Pet The Preacher – The Cave & The Sunlight

Unquestionably my most played album of the year.
Blending perfectly a gloomy atmosphere with a very special rage that literally crushes your brain with heaviness.
I’m so mad I missed them when they played in my hometown, I’m such a dickhead… Will make sure to fix this in 2015 🙂
BLOW IT UP !

So what you think of this list of the TOP albums of 2014, do you think I missed one ? (Yob ? haha) Of course a lot of other wonderful albums came out this last year, but I had to restrict myself to a limited number in order to keep away from insanity…

I hope 2015 will be as good as 2014 in terms of albums releases, but I don’t doubt it, the scene is flourishing more than ever !

PS : Don’t forget to leave me a comment, it’s always pleasant to see that people read and enjoy what you write 🙂