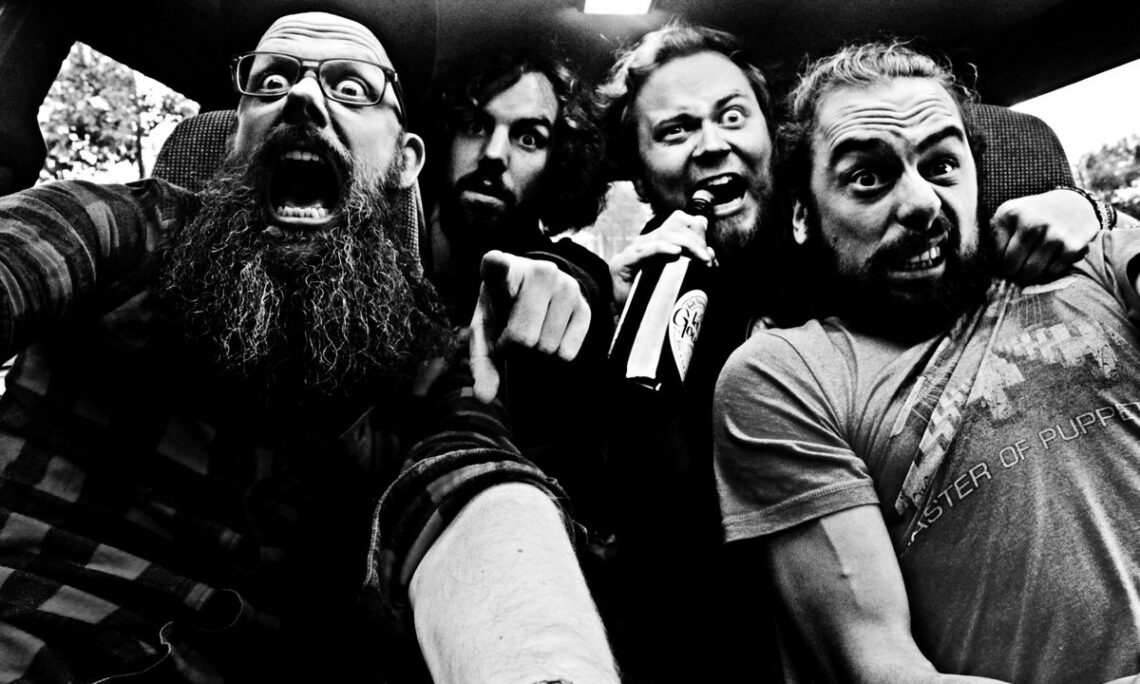 The welcome return of the “Köllefornian” Desert rockers. Let the good times roll!

Phiasco, the fun-loving Desert Rock band from Germany are back!

With a new album due to be released soon, five years on from their last LP Vieh (review here), we get an exclusive first look at the video for the lead single ‘Lucky Loop‘.

Below the video, you can also check out the recent conversation I had with Georg, Phiasco‘s lead vocalist and guitarist. Enjoy!

Mr. Weirdbeard: Hi Georg, it’s great to hear some new material from you guys. How would you describe the band’s journey since your last release?

Georg: Hey Bob, thanks a lot for jumping on board for a short trip in our Volvo. And a trip in this car is a pretty good description of the band’s journey. First of all, it never gets boring. It’s like discovering the world through the eyes of a child. Once you hit the road to play a concert no matter if far or near, you‘re in this “never boring Volvo” mood. Anything goes!

On the other hand, you sometimes need the constitution of a long-distance runner. For example, writing songs can be a hard run for us because the rehearsal room is where all the magic happens. We often call our relationship inside the band as a kind of poly-dictatorship. When there is a song idea which is not Phiasco enough for parts of the band, it won’t make it through the final recall. Because of that many song corpses cover the road behind us since the release of ‘Vieh’.

But then there are of course these superpower moments. The Volvo has got this turbo button on top of the gear shift knob. Pushing this button gives you extra power on the highway and that’s like the moment when a Phiasco song gets finished or a freaky music video idea grows in our minds.

Mr. Weirdbeard: Your new album is called ‘Kessel’ and there is a crowdfunding campaign to help put it out on vinyl. Can you share some more details about this, please?

Georg: Yeah, Kessel is the German word for kettle or boiler. The easiest way to see the connection is to watch the video for ‘Lucky Loop’. It’s just magical!

We recorded the album in late 2019 in the “79sound studio” in Cologne. Shoutout to Christoph Scheidel who did a great job recording, mixing, and mastering our stuff in his hybrid digital-analog studio.

We definitely wanted to make a music video for many years already. Just not the normal stuff we find with every rock band. Felix Rudolph was crazy enough to turn all our ideas into a script that came close to making sense. Well, as a result no money was left after recording plus video production and because of the pandemic situation there was also no possibility to earn a single coin on the road; plus we chose not to go to any label who could maybe support the pressing of the vinyl.

The best idea we had was just to start this crowdfunding/presale campaign. Any help is appreciated, just visit: https://startnext.com/kessel (it’s in German, but you will make your way through – or just write us).

Mr. Weirdbeard: I’m sure you are itching to get out on the road and play in front of a live audience again. What are the possibilities of this in Germany right now with regards to the current Covid restrictions?

Georg: Come on Bob, don’t rub it in 😉 Yes, it is hard for us. The numbers are going down here and last weekend parts of the band actually visited an open-air concert…with real people…! Shout-out to Manuel, our backup-bass-beast and his band ‘Grand National’.

It almost felt like being at a concert the first time, but so damn good. We hope this positive trend towards the “old-normal” continues, but I am really curious how many of the little bars and clubs we usually played in survive this shit.

It feels a bit like waking up from a bad dream. Sadly there is only one show planned for us in August, but still, it is our light at the end of the tunnel!

Mr. Weirdbeard: We are premiering the video today for the track ‘Lucky Loop’ which ties in perfectly with the ‘Back to the Future’ theme featured on ‘Vieh‘. There are lots of cool effects & beers being drunk, was it as fun to make the video as it is to watch it?

Georg: Asking like this you already know the answer! Of course, it was freakin’ awesome! A lot of ideas used for the video were already quite old: We had planned a video for the song ‘Back to the Future’ on ‘Vieh’, but never realized it. When the video was finished after six intense days and long nights of shooting in different locations we were absolutely knocked out.

As mentioned before we were damn lucky to work with Felix Rudolph and his great crew. We love you guys! And yes, a lot of beer had to be drunk, not only when the spotlight was on! We had no choice, once the Kessel was on fire there was no way back!

Mr. Weirdbeard: Awesome! Thanks for chatting with me today Georg and good luck with your new record.

Georg: It was my pleasure 🙂