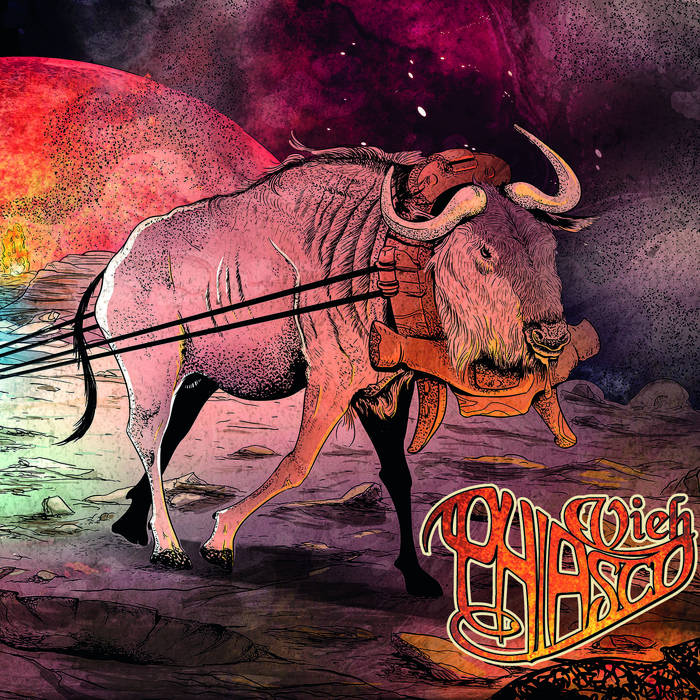 German Stoner Rock that Breaks From the Herd!

Phiasco are a four piece Stoner Rock band from Cologne, Germany or as they like to call it “köllefornia”. Vieh is the full length follow up album to their five track EP ÖL which was released back in December 2012.

This new record was certainly worth waiting for though, so brace yourself as we embark on a rock and roll rampage through the crazy world of Phiasco!

The album artwork depicts an Ox wearing a yoke, on an distant alien world, pulling a Volvo Estate car modified to replicate the Delorean from Back to the Future. I kid you not. ‘Back to the Future’ also happens to be the opening track and GREAT SCOTT! what a sound. Heavy fuzz guitar rips over a thumping rhythm section, complimented nicely by some cool vocal harmonies and wicked tempo changes.

The ‘Ultimate Warrior’ makes a triumphant appearance next, this homage to the late WWE wrestling legend contains a soundtrack of psychedelic riffs so huge that there are rumours of steroid enhancement. Allegedly.

I have got a suspicion that ‘Titanus’ and ‘Titanus II’ are in fact one song but someone hit pause half way through, but man there is so much going on and it all sounds great. Flowing from gargantuan heaviness to subtle lighter sounds and back again with powerful vocals to match.

I never thought I would see a track entitled ‘Erasing rabbits with my Phaserlight’ but hey it is another stunning heavy rock song.

‘Old Town’ is a track that features on the debut EP and I can see why it must be a favourite. Fast paced and anthemic, a real crowd pleaser.

‘Sunndown’ has a great melodic intro before a heavy psych/doom riff bursts into life and really gets your head nodding. Georg once again impresses with his vocals.

‘Phisco’ is another track that appears on Phiasco’s first record, but in the intervening years it has grown a lot. Now clocking in at just over 15 minutes long, it gives Georg (Guitar/Vocals), Mengi (Guitar), Hannes (Bass) and Remy (Drums) ample opportunity to showcase their talents.

Vieh was recorded live over the course of 3 days back in 2014. It’s not perfect, but we don’t like perfect do we? I like the fact they’ve left in some laughter and talking, it gives the record a sense of ‘realness’ and enjoyment.

I also get the impression these guys know how to have a good time, but would make better friends than neighbours

Anyway, I say bring the noise and the beers. PROST!

Whilst having a few beers with friends. Do I say that every time?

Vieh was released on 18th February 2016 via Shithead Records for digital download and also with a limited edition of 100 copies on black vinyl.