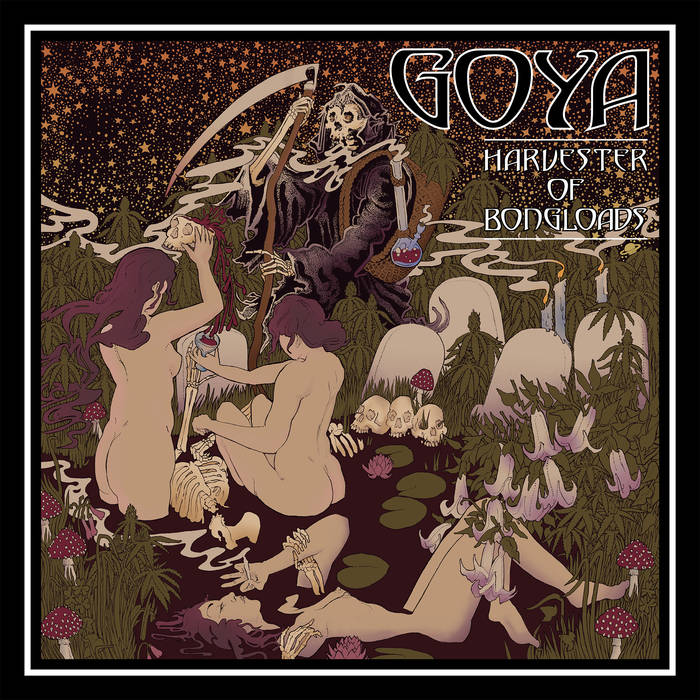 The rites of hashage are finally done, time to drop out life with bong in hand!

Hailing from Arizona and composed of Jeff Owens on guitar, Nick Lose on drums and Sonny Decarlo on bass guitar, Goya is releasing their third full-length. At first, I was tempted to say « their long-awaited third full-length », but one has to admit that Goya never leave their fans in want of new riffs for too long! As always, you can expect some tasty fuzzy soli, killer riffs, weed worship and a good deal of misanthropy. So pack a bowl, find the cosiest place of the house, set the volume limit to the max and embark on an epic journey into the riff-filled land.

Omen is a three-part, 20-minute epic ode to oblivion and the «Greeheen» as Brant Bjork would put it. The first part of the song, Strange Geometry, gently welcomes you with tribal drums and strange guitar sounds crawling up everywhere like maggots around a tomb. As eerie as the atmosphere is, it almost feels relaxing and laid-back, but you can’t shake up the feeling that something is creeping up that tomb and that it’s coming to get you. And suddenly, a crushing, fuzzy guitar tone comes up and wraps you in its cold arms. The sound immediately gets heavier, grittier and more desperate.

The second part, Fade Away, sounds exactly like its title suggests: almost minimalistic. It acts as a short breather between two heavier parts, the last one being the heaviest and the crushiest. Indeed, Life Disintegrates closes this epic track with soaring guitars and deafening drums as Jeff keeps spitting out his desperation and rejection of society.

Side B is composed of three separate songs which can also be considered as a whole as there is no pause to break the flow between the songs. Germination is a short instrumental track which turns out to be the intro of the following song, Misanthropy On High. With this track, Jeff restates his aversion to society and his way of reaching a perfect state of obliviousness through drug consumption. Still without any transitions, the last track Disease takes over to obliterate your ears and any strings of hope that might have been left.

Although Goya broach tough subjects like misanthropy, depression and addictions, they do it in a way that’s inviting. Two elements are at work here: on the one hand, there is a kind of universality in their lyrics. Regarding their hate, they do not make any assumptions based on races, beliefs or genders: it’s not about « you » as an individual, but about the whole society. Although weed is one of the cornerstones of the genre, not everyone may get the appeal of smoking themselves to death. Nevertheless, the idea of fading away and leaving this awful place is pleasant enough to win everyone over. On the other hand, beyond the lyrical themes, this album stands out thanks to clear vocals and the overall warmness of the sound. Goya is more melodic than ever without giving up their heavy side, and that’s an impressive achievement.

The title of the album is a slight nod to Metallica’s Harvester Of Sorrow, from the album And Justice For All….