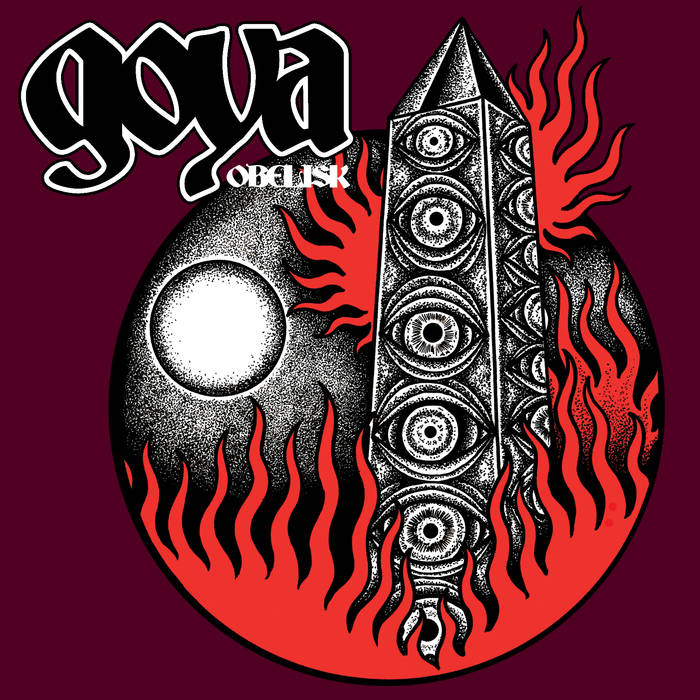 There is Beauty in Madness.

Goya has been around for a few years now and have already released a bunch of materials you might have heard. After a great debut album in 2013, an interesting EP last year, an impressive split with Wounded Giant a few months ago, and the first single from the new album earlier this year, now it is time for Goya to finally release their sophomore album, Obelisk through the magnificent STB Records.

In case you have not heard of them yet, Goya is a stoner/doom band who worships Black Sabbath, Sleep and Electric Wizard. Their love for those bands is, or rather was, obvious, especially on their first album and earliest demos. I say “was” because things have changed. Indeed, Goya’s songwriting evolved a lot since the release of 777, in 2013. The biggest and most noticeable differences lie in the variety and the unique sense of wholeness which flows throughout the album.

The debut album had that peculiar catharsis vibe, one can feel that the band had a lot of anger, hate and anguish that they needed to deal with through their music. It was primal, violent and rather monolithic – a direct punch in the gut. In a sense, the band does the same thing today but they have decided to take a different, more thoughtful approach – because if 777 would broadly sound the same if one decided to mess with the tracklisting, Obelisk would not make any sense because all the songs have a specific goal in the construction of the album.

Right from the first track, “Nothin’ but Dead Stuff”, you can notice that Goya grew as a band and worked hard to find their own sound. It is different from what they used to play. Indeed, the first few seconds invites the audience to relax before gently entering into the realm of dementia and mind-altering drugs. There is no point rushing toward the pounding drums and the crushing riffs, you just have to sit back, be quiet and let Goya take you into their world.

Of course, all tracks are not built in the same way. As I have mentioned before, one of the strongest points of the album lies in its variety: there are some pretty chill songs as well as tremendously heavy ones. This is where the beauty of the album is : nothing is to throw away because each and every song is an important part of the album as a whole and they all sound different. For example, the title-track, “Obelisk”, has wonderful, heavy distortions and its poor guitar sounds like it is shred to Hell and back, whereas the following track, “300 Eyes”, is a damn beautiful piece of acoustic music which almost sounds like a lullaby (although it might be a bit fucked-up, the lyrics are about a man who wants to gouge your eyes out).

And the next track, “The Sun“, is once again, at the opposite end of the spectrum: it is the most exploding track of the LP! And yet, the tracklisting makes perfect sense as it enhances just enough the differences between the tracks to make you notice the variety of atmospheres Goya creates. Moreover, it is nice to have some breathing space between two really heavy tracks, it puts things in perspective and helps you better appreciate the whole. This album is truly everything but monotonous, one can sense that Goya did its best to break the pattern they laid down with 777.

And besides passive-aggressive songs like “300 Eyes“, they also wrote two instrumental songs which really bring something to the table and yet, they are completely different: “The Star” is a pure Sabbathian acoustic guitar track whereas “Echo From Space” is much more ethereal and is ominous of the final, monstrous monolith that is “No Place In The Sky“.

As I said, this is not a full frontal album as it takes its sweet time to alienate the audience. You cannot grasp the essence of the whole if you do not listen the entire thing. The band manages to create their own pace and space, led by madness, murders and misanthropy. What really is surprising is that you feel so at ease in their fucked-up world that it is almost disturbing. Even if this album is, of course, far from being “mainstream”, it is very easy to listen to and to wrap one’s head around, although you would need a few listens to explore all of its depths.

In the end, there is everything you can expect from a band who worships Black Sabbath, Electric Wizard and Sleep: evil riffs, evil lyrics and insane psychedelic moments. Nevertheless this album feels like they have outgrown their influences to riff their way out into their own, darker path. In other words, STB Records and Goya did it: they released a kick-ass record and I like to think that it is a serious contender for the album of the year, even if the competition is going to be tough.

Although the CD and cassette versions are already out of stock – sold out in a matter of minutes -, you can still buy the split they put out with Wounded Giant on STB’s webstore (featuring an early version of No Place In The Sky) or simply buy the album on their Bandcamp page. The full LP will be out in October.