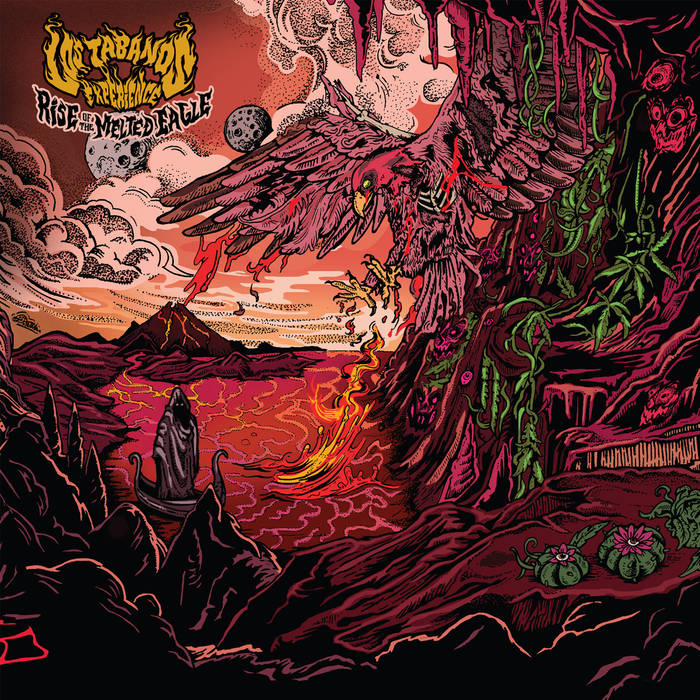 Immediate takeoff to Chile... and even much further !

One year after Atlantis Mirage, Santiago’s fuzzers released their second LP entitled Rise Of The Melted Eagle. Their new trippy exploration into the Earth center and human soul’s depths.

Did you know Chile has a tradition of astronauts? If you do not believe me, just check out the best representatives of their rich heavy and psychedelic scene : Demonauta, Grand Reunion, Kayros, etc. And last but not least is called Los Tabanos Experience. These guys also are crazy adventurers. But rather than looking at the stars, they dedicate their quest to the discovery of the underworlds. And after having explored the abyss in Atlantis Mirage, they decided to take you to the burning landscapes of the Earth center with their new production Rise Of The Melted Eagle. A highly psychedelic and introspective journey fueled by heavy psych sounds and frenzy jams.

The album begins with a bang, with the opening “Resin Injection”. The listener is dropped without warning in the burning and hostile heart of the underworld. The track works as an erupting volcano, alternating calmer smoky atmospheres and more frenetic phases of lava flows. Basic ingredients of the album already strand. Incandescent fuzz makes the whole universe burning, whereas modulation effects add consistency and complexity.

The second track, “Sacrificio Por Fuego”, starts with a tribal drumming pattern. Soundscapes are shaped with a deep bass line and modulation effects. Soaring wah pedal guitar riff still handles the narration of the odyssey. Alongside, drone machine sounds highlight some krautrock influences, that will remind you your favorite German space rock bands. The structure of compositions remains in a classic but still efficient heavy psych conception.

Then comes “The Magma Caravan”. The track evokes irrepressible strength of planet Earth telluric forces. It is composed of an accumulation of sound layers. It gives the impression that the ground is melting under magma effect. As everything around him is collapsing, the listener then falls into the deepest place, calmer but darker. The tempo slows down and the traveler lets himself be guided by a celeste voice across mesmeric areas. Little by little, tension increases again to finish in a frenzy jamming climax haunted by the return of an aggressive fuzz.  The travel continues with the next one “Majestic Volcano”. The exploration vessel gains speed and navigates in unexplored underworlds. Modulations and saturations seem to reproduce distortions of space and time, in a Yuri Gagarin style.

Fifth track “Crystal Madness” keeps high the level of sulfur in the air, cooking the same poisonous ingredients in the magma pot. It still follows a pure heavy psych way of composing and managing the tension, reinforcing the unity of the album. Same logic is used in shorter tracks 6 and 7, “Inner Sun” and “Acid Digger Machine”. Both tracks constitute new episodes of the same movement, pushing forward the introspective aspect of the exploration.

Travel finishes with “Kali’s Worship”. One of the best tracks of the album, more rooted in Indian music vibes. It works as a reincarnation, a mutation of psychedelic music forms : rather than closing the album, use of the sitar opens the doors of a different psychedelic universe, a kind of invitation to another trip.

It is now time to come back to the surface of the Earth. With Rise Of The Melted Eagle, Los Tabanos Experience delivered one of the most trippy albums of the year. An aggressive, deep and coherent production. A journey of body and mind without any compromise. Well, I already can’t wait for the next one!

After the reading of Jules Verne’s novel Journey to the center of the Earth… or before your next shamanic trip !

More than a band, The Tabanos Experience constitutes a collective. From the 8 musicians playing through the album, 6 of them did not participate in the previous one Atlantis Mirage.