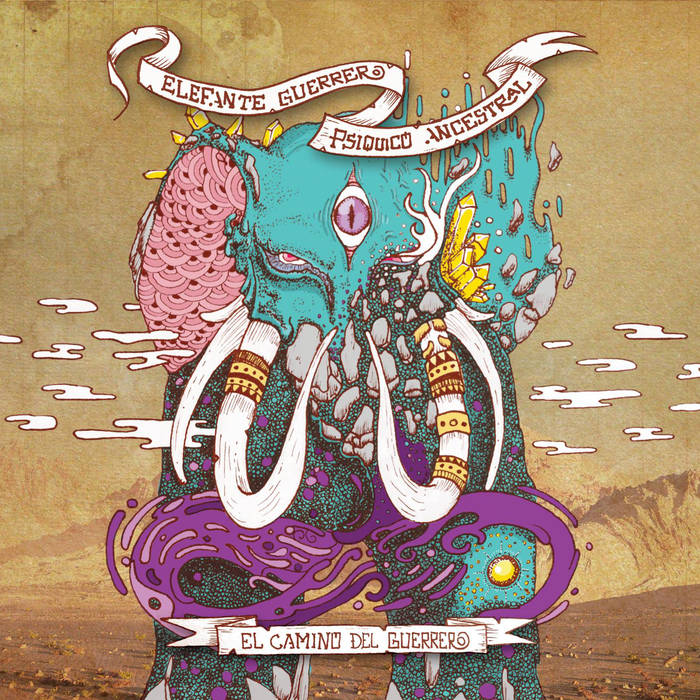 Let's Tell You a Story Without Saying a Word.

So as those who’ve been paying close attention will agree, 2016 continues on releasing a sea of incredible new music. It’s a great time to be alive when this much entertain can be at your fingertips. This week’s discovery actually came out a few months ago, back in November of last year. El Camino del Guerrero (‘The Warriors Path’) is the first full-length album from Argentinian heavy psych trio Elefante Guerrero Psiquico Ancestral – which literally translated means ‘Elephant Warrior Psychic Ancestral’. That’s almost certainly not how it’s meant to read though, so without wishing to offend people with my terrible Spanish, we’ll simply refer to them as Elefante.

This album is telling a story through sound.

The imagery that is painted by these exquisite psychedelic jams is SO VIVID that I’ve written my interpretation of the story, which I would like to share with you now 🙂

“You emerge from the gates to the thunderous applause of a packed battle arena; standing in the centre, captivated by the cheers of fuzz and spurred forward by the rampaging drums.”

We begin with ‘Heisenburg‘ and it’s homage to the classic traits of heavy metal. High octane galloping guitars blow up in your face and it’s pointless to resist it raising your heart rate in excitement. It opens punchy, rapid and relentless before gradually sinking into the album’s true psychedelic nature.

“Tonight’s battle is then announced. You are to be pipped against the menacing scorpion and it’s piercing guitar screeches. The scorpion looms, epic and imposing.”

‘Entre Dos Mundos (La última batalla de la Serpiente y el Escorpión)‘ leaps between thickly swung hard rock grooves and palpating depths of heavy psychedelia. At its centre lies an atmosphere of space rock that Yuri Gaggarin would nod their head to – and how this track is only 5 and a half minutes long remains anyone’s guess.

“As you struggle with all your might against the dreaded scorpion, suddenly your surprise backup appears; a tiny baby elephant.”

With an air of comedic timing, ‘Methamorfosis‘ then drops from the stratosphere into a smooth latin jazz interlude. Rarely have I been more baffled by a shift in tone than when I first heard this tune. Elefante sander through the first minute before revealing a mammoth stampede of crunching guitar tone. This ends with a mind-melting solo that is elevated even higher by the distorted concoction of effects.

“The baby transforms into the gargantuan that graces the cover – the war machine of this savannah. ‘Emperandor Elephante’ roars his mighty bass riff and you rightly bow in appreciation of the guitar harmonies. The scorpion cowers away, defeated.”

This is the album’s crowning theme tune – performed with the swagger deserved of a 7-ton beast.

“As the dust settles, a lush oasis is revealed. Even giants must sleep, and your Elefante guardian rests with you by the still waters of this tranquil space rock nirvana.”

‘Crisálida‘ comes at the perfect time to provide a blissful moment of quiet reflection and give the album impeccable pacing. Gracing the ethereal nature of Pink Floyd, King Crimson and the like, you’re transported to a feeling of zen. Crisálida means chrysalis (you know, what a caterpillar forms before becoming a butterfly?), so I guess you could see this track as the album’s little cocoon of safety. If you’re someone who keeps a ‘chill’ playlist, do yourself a favour and add this to it!

“But in the depth of night, the water over the oasis begins to stir. The ‘Kraken’ awakens, and thrashes his unrelenting riffs directly towards your heart. This battle is far from over.”

‘Kraken‘ opens with intimidatingly fuzzed hard rock riffage that has you head-banging regardless of where you are.  It turns into downright terrifying squeals and melodies that sound like an end game boss’s fight music. The battle is personified through a tug of war between high energy aggression and grooves as thick as treacle. Seriously, there is a sudden change at around three-quarters of the way through that borders on inexplicable without you trying to provide some made up context!

“The Elefante battles valiantly, but the Kraken proves a worthy foe as he stuns your formidable war machine with its surprise attack: ‘Hipnosis’. Standing there motionless and in a trance, the tempo slows as everything stands still. But in that moment, when everything seems lost, Emperandor Elefante unleashes his super ability!”

(I guess maybe it shoots like crystal powered laser shit or something?) Elefante carry you up to the most menacing echelons of distortion on ‘Hipnosis‘. The hypnotic (obviously) rhythm section trundles on, gradually ramping up until one of the best sections of the entire record takes over.  If ever there was a riff, sung triumphantly by guitar and bass alike, that sounded like a war elephant loosing his shit and smashing the place to pieces…it’s this.

“With the evil Kraken vanquished, the crowd erupts in jubilant cheers and applause. The scorpion returns to present a truce, but elephants never forget. In one final display of power, Elefante trashes the heaviest sound of his tusks – complete with nicknames. One is called ‘heavy’ and the other…’psych’.”

It was at this point I realised I was probably reading a little too far into it, so without wanting to risk sounding pretentious, we’ll stop things there.

If you’re ever dropped into an area and are required to battle a giant scorpion and some form of a mythical sea monster, I could imagine this album would really come into its own. (Who are we kidding? Baked out your mind of course!)

The digital release from Bandcamp (which is still currently at name your price I might add!) has a bonus cover of Led Zepplin’s “Since I’ve Been Loving You”, as if you hadn’t already gotten your monies worth! And what’s more – done with powerful female vocals! I like to see this as the vinyl I hand Emperandor Elephante to say “thanks for taking care of that Kraken and Scorpion back there mate”, you can choose to see it as whatever you like, but no matter how you look at it, at this point, you’re just being spoilt.

Why not share your version of the story with us? 😉

Keep it vaguely within the realms of sanity,