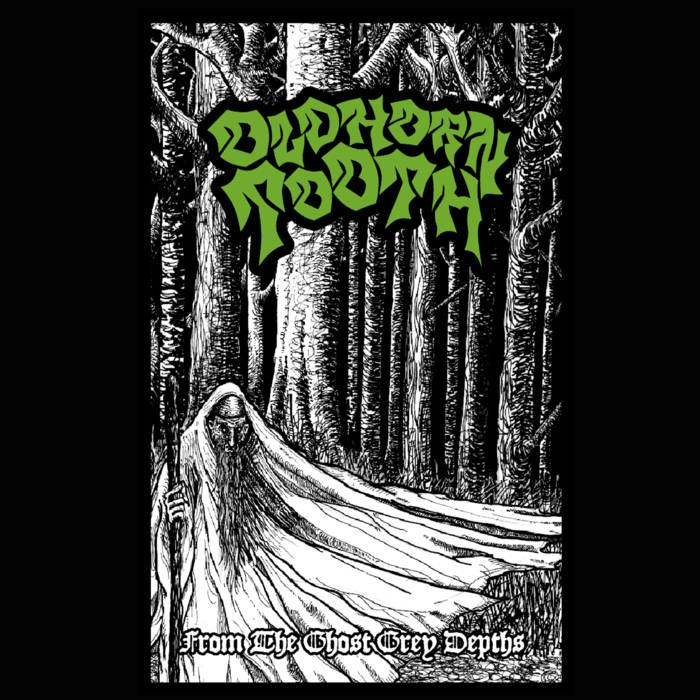 Out of London, UK, the trio Old Horn Tooth held nothing back on their release From the Ghost Grey Depths. In late May, the third track titled Old Horn Tooth was sent to me to check out with the memo “So Heavy it broke every bone in my body”! How could I not bump it up on my queue of music I mean to experience with a tag-line like that?

An experience it was!! At the 47 second mark on that track, in comes the first dirty, dirty note and I was hooked. With more care than I use to remind myself of important dates, like doctor’s appointments, I marked June 29th as the day I got to hear three more tracks from this group.  Three more tracks of curated distortion, driveFrie, fuzz by these newcomers.

From the Ghost Grey Depths’ first three tracks clock in at a little under 40 minutes of unrelenting weight and fuzz.  The fourth and final song is titled Grief and is an ambiance track that snaps you back to after the prior journey.  Modulated and decidedly dark and stormy effects; played by the fourth instrument in the group – the ‘GRIEFCASE’. The Griefcase is Old Horn Tooth’s equivalent to a magician’s back of tricks.  Brought into the band by their drummer Mark, it is an FX box (not a bag) that is “an added dimension to an already filthy setup… to invoke feelings of dread and grief” according to Chris – the band’s guitarist/vocalist.  It delivered the foreboding gloom effectively.

The first three-quarters of the debut are doom and stoner riff delights. From slow and plodding to up-tempo and back again- all with that Griefcase of sounds and noise carrying you from one fuzzy bit to the next. You absolutely want to head bang while listening.  From the Ghost Grey Depths has a very purposefully crafted – “best when listened to as a whole album” vibe.

Production is solid as well.  When you can balance that heavy of a sound and the listener can distinctly make out each instrument, and not feel through their ears have drowned in a mud bog; it’s a job well done.

Out well under a week, and the limited edition cassettes are already almost sold out.  I’m going to buy mine ASAP.

Beast In The Field