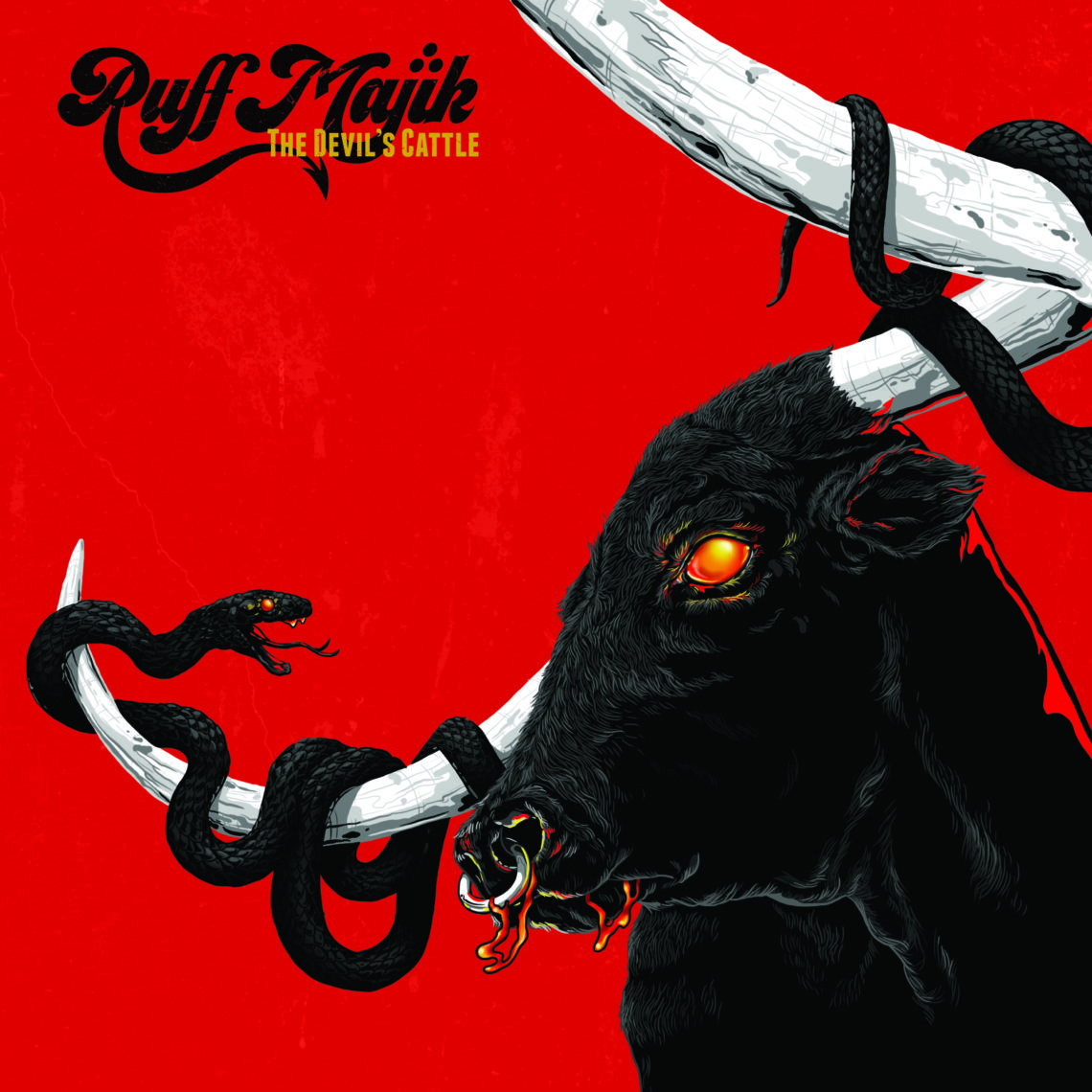 The South-African fuzzers are keeping up with their relentless rhythm of releases. After showing us their heavier side last year with the brilliant Tårn, they’ve been trying some quite different things since. That said, you can definitely feel every inch of the way that has led them there and now.

Tomorrow, right on time for Halloween, they’ll release their new offering, The Devil’s Cattle. 13 tracks full of occult, zombies, succubus, and other joyful monsters, as you might have glimpsed in the trio of teasing video clips released over the last few months. Conceived as an ode to every side of the mighty Rock’n’roll, don’t expect a calm and unhurried journey. You’ll find lots of different vibes here, bound together with that special Ruff Majik sauce that makes it work brilliantly at any time!

Today we have the honor to present you the full stream of this awesome compendium of craziness made sound!

Ruff Majik will always sound like Ruff Majik, no matter which direction they take, I guess this is a constant. In the last year, they added two more band members, a new singer (don’t worry, Johni still sings too), which also plays keys or guitar, and another guitar player. As you could imagine, it can bring lots of new possibilities, especially to a power-trio as raw as it gets. Those new possibilities they definitely exploited, and went even beyond what you could expect, while keeping, as usual, their core identity.

They took twists and turns, explored every uncharted territory they were facing, and made the best of it every goddamn time. Be it by simply pushing their previous experiment, going into a more appealing almost popish way, luring us with delightful crooner blues vibes, or surrendering completely to the dark side. The ingredients remain the same, thick and distinctive FUZZY sound, slack and efficient catchiness, and crazy rock’n’roll energy to make you headbang your ass off all along the lively ride they take us on with The Devil’s Cattle.

Johni and Evert’s vocal styles make way for some quite interesting and eclectic experimentations. They’ve tried a fair share of it over the course of this album and brought some very cool combinations to light here and there. The production is spotless from start to finish, making every side of this record sound exactly how it should.

The groove is everywhere, in every way it could. The bass is gorgeous and as greasy as needed, exactly when needed. The drums precisely and mercilessly set the pace, be it into frenzy thrusts, heavy knocks, or laid-back claps. The guitars can come together to build a wall of thickness, dropping on your head like an avalanche of fuzz. They can also take turns out of the main body of the storm, spiraling into melodies and soli, to break out the numbness with some sweet fuzzy delicacies. And last but not least, the keys and organ bring even more groove and a nice touch of spooky psychedelia as the perfect icing on this marvelous cake.

It was already not so easy to pigeonhole Ruff Majik‘s sound before, and with this one, it became completely impossible. It’s just way too rich and diverse, and just when you thought you kinda got it, they’ll astound you with the next track.

When I tried to think about this, the video clip of Who Keeps Score came back to my mind. I feel like this animation clip is a pretty good allegory of the band’s songwriting. When you’re on a hunting trip in a land full of zombies and vicious creatures, you’ll have to take detours. Maybe you had a solid plan at first, but you’ll have forgotten it soon enough, having to cope up with the unpredictability of such activities. The forest might have been nicer, but you’ll end up running from the thundering Balrog in the doomed mines of Moria nonetheless. That’s how those kinds of things go. Going through the journey of The Devil’s Cattle is of that sort of surrealistic odyssey, facing unknown fears and vicious sounds around every occult corner.

Don’t get me wrong though, what I’m saying is about the listener’s feeling when confronted with this record. I know Ruff Majik had a perfect plan when composing this album, and everything went according to the plan. They’ve mentioned it here and there before, they wanted to put out a record with every vibe you could want. No matter what you’re looking for, you’ll find it here, eventually, and that’s an undeniable fact. The Devil’s Cattle is one of the most multifaceted yet authentically coherent albums I’ve heard this year. I’m pretty sure the guys are already working on new mischief for their next release, and I can’t wait to hear it.

In the meantime, let’s wish for things to get a little bit less insane regarding the global situation. Especially regarding the cultural scene, which is sadly going more in the undead direction right now. I have the feeling that this album also takes root in the evil and hardship we can have to face in our society and reality, even more in the troubled times we’re going through these days… Man, I really hope we’ll soon be able to get these kickass tunes melting our faces properly. Live, loud, and wild as it needs to be!

Until that is possible, you can already pre-order the record to spin it endlessly. It’s available worldwide on 140g vinyl (single gatefold with splattered orange vinyl and a pull out A2 poster) and Digipak CD via the South-African webshop here. Or soon via the Black Farm Records webshop which will handle European distribution. Take a look at this beautiful wax, I’m sure it will look great in your collection 🤩

In your pitch-black Cadillac, fully loaded with machetes, stakes, and any undead-killing weapons, charging full-throttle on the highway.

Written and recorded in lots of places over several continents, this album features a few guests from the South African scene, but also some vocals from Vincent Houde of Dopethrone!