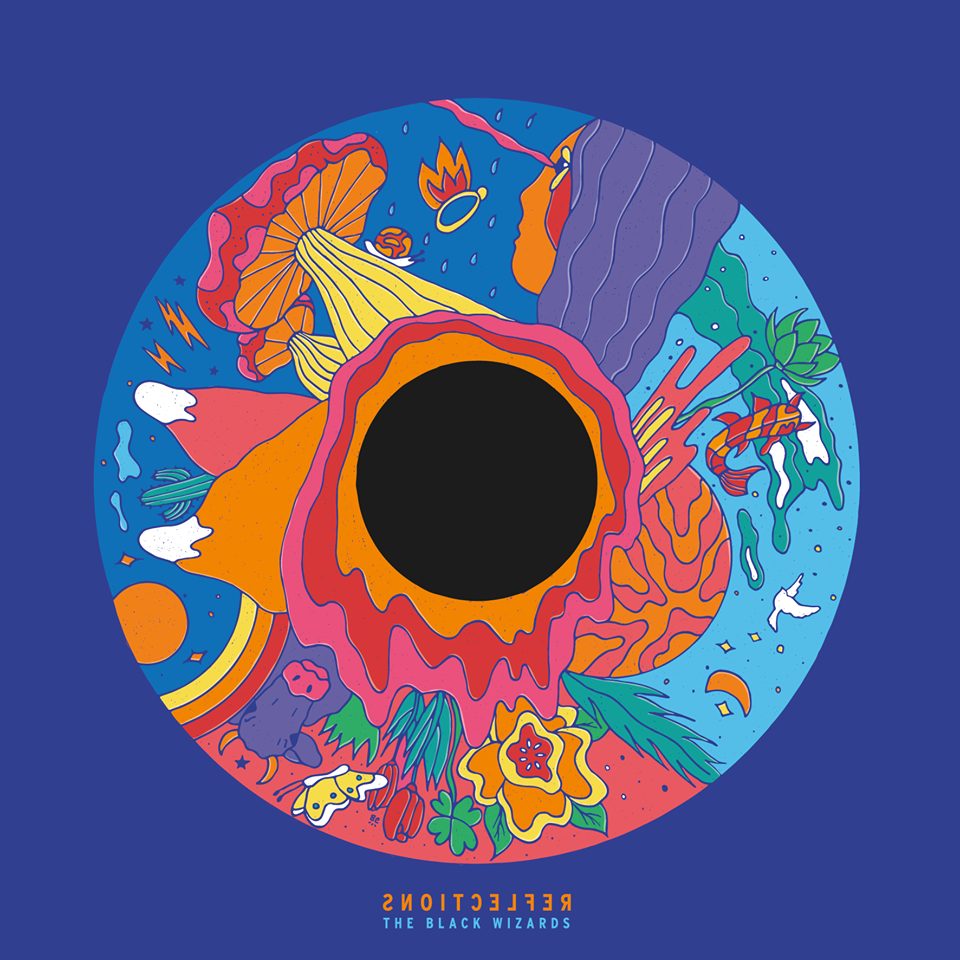 Blues, distortion and dreams of the cosmos. The Black Wizards are back!

After almost two years of composing, touring and jamming, The Black Wizards returned this summer to reassure everyone that they have reached yet another level of maturity. The Portuguese formation didn’t stay in the safe haven of their previous creations but decided to shake their fuzzy comfort zone and arrive at results striking both old and new notes. Jacked with sick riffing as well as mellow journeys through Iberian plains, Reflections will surely take you places. In fact, this record resembles a dance. One where the wild and tamed sides of your soul are interchangeably put to action and together, strive for the perfect cosmic harmony.

Reflections is a pretty unique creation comparing to the two previous albums put out by the band. It boldly initiates with the cheerful and tense Imposing Sun, which by the way is the shortest track ever written by the band, and later doesn’t cease to slow down to focus on single guitar strokes and some mystical tingling in the background. It does precisely that on the second track titled Outlaws. The tempo there is being gradually reduced up to a moment where guitar chords,  João’s easy drumbeats and occasional Joana’s voice merge together and form a cohesive entity that is at one point captured by a relaxed and seemingly distant guitar solo. Yet again, the track gains momentum and continues with a similar underlying sequence of sounds up to a point where all instruments go back to the original composition from the beginning of the song. A move repeating throughout the record at least a few times.

In the middle section of Reflections, The Black Wizards seemed to have drifted away and embraced the softer side of things. While Starlight is perhaps the most sensitive and delicate of all the tracks, it very well manages to show the romantic face of the record with it’s rippling notes and pillow-soft bass work. The last minutes of the song literally stole my heart as suddenly a Zeppelin-like solo emerged from this hazy dream and slowly faded away being accompanied by peaceful keys and the aforementioned bass. Only to be gently closed off by a wave-like noise washing it all away into the sonic abyss…

The fun continues, this time pushing forward with a rather funky underlay in the Symphony Of The Ironic Sympathy. The track feels incredibly positive and keeps on rolling casually until it breaks mid-way where it gets a massive boost. Riffs suddenly stretch, drums blast heavier and the vocals seem to be coming from somewhere far away. Then, at the end, we get an expressive monologue by Joana herself which suddenly fades away due to the increasingly dominating guitar solo constantly swirling in the background.

What would an album be without a bitter-sweet ending that leaves your soul stranded somewhere high above? Kaleidoscope Eyes, the second single to have been released by the band, is perhaps the quintessence of what makes The Black Wizards who they are. While it’s not so much infused with fuzz, crazy reverbs and myriads of interlocking riffs, it very well shows that the guys have mastered the art of building a track and turning it into a sonic landscape. The delicacy and tempting peculiarity of this song drag one deeper and deeper only to later accelerate, stop and explode with a thick (!) bass solo that opens the door for the band’s signature riff madness. After a short while, things go back to where they were before and innocently perish into nothing. Wanting more, you are left with nothing but spinning this track again…