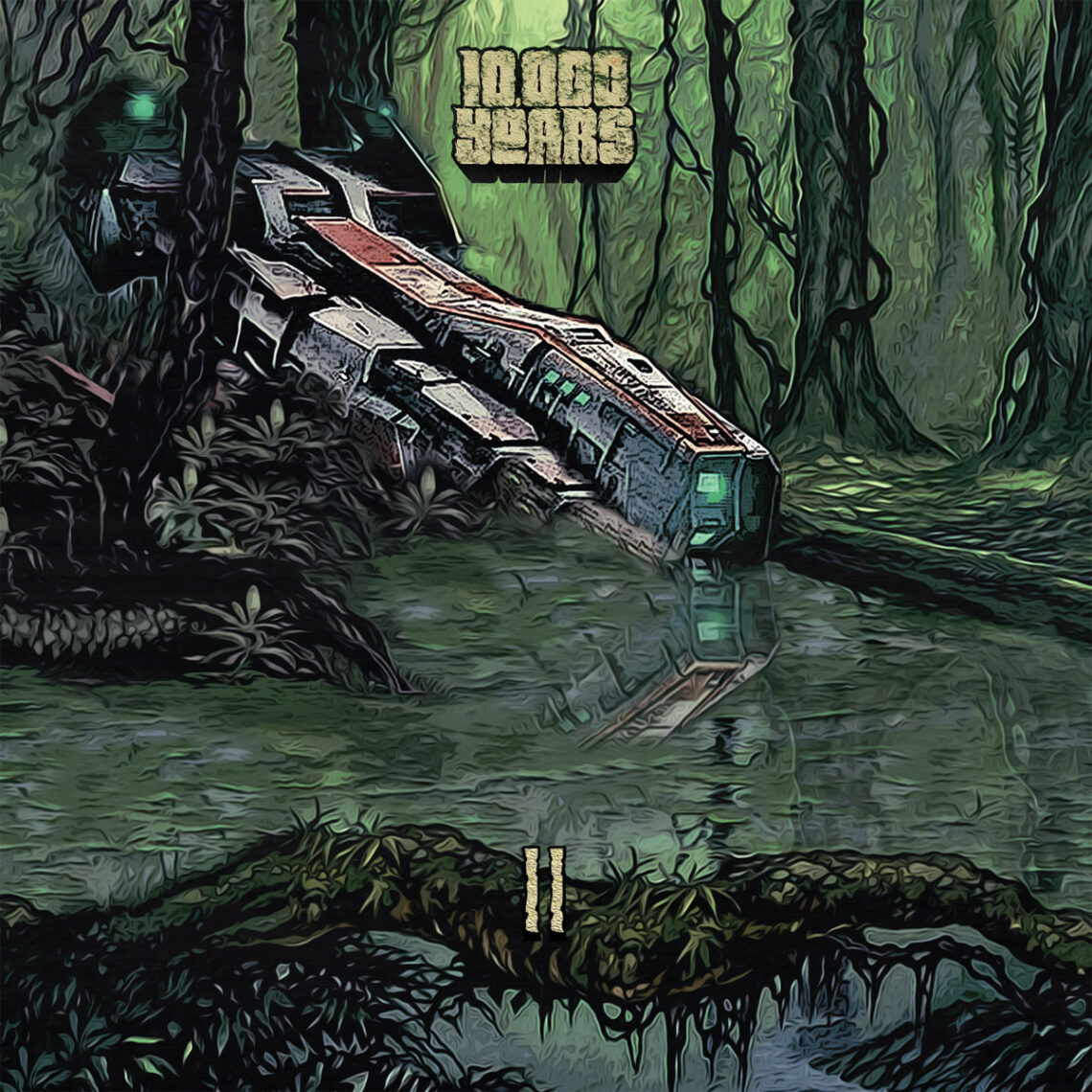 ALL HAIL THE GREEN KING

Out of the shadows from the North, emerges this trio of space-time travelers, unleashing the hell of the Green King upon us.

10,000 Years is a quite recent stoner sludge trio from Västerås, Sweden, making their introduction to our reality last year with their debut self-titled EP. Their name comes from the amount of time that passed on Earth, while the spaceship ‘Albatross‘ was drifting through time, space and realities. This first LP of the Swedish trio describes the return to Earth for the crew, only to witness it ruled by the Green King and other ancient gods.

It starts in a fury, sonic metaphor of the “Descent” into the atmosphere, only to calm down right after. “Gargantuan Forest” starts smoothly, as the crew must extricate themselves from the Albatross and discover the forsaken environment in which they landed. After this first look around comes angry riffage and nasty, but clear, vocals, paying hommage to the mighty High on Fire. Breaking down after a while to a dragging hazy bassline, they slowly bring in a noisy fury, only to turn it into a raging solo, before bringing back the riff. Classic move, but still damn efficient, and perfectly executed. This is a proper introduction to this alternate reality the Swedes are depicting in front of our ears, showing already the range of skills at their disposal.

They leave us no time to think too much on that and grip us by the gut on the following track, “Spinosaurus“. Here peaks the viciousness of the band, illustrating the “skull-crushing stoner-metal” they mention in their description. The riffs and screams will come at you relentlessly until you submit to their mightiness.

“The Mooseriders” starts with the same intentions but displays more nuances and variations in the process. Using profusely slow groovy catchy riffs, the trio knows how to build tension, through wisely used break-downs, build-ups, and solo, the riff returning more efficient every time, for your vertebrae’s best pleasure. Each transition is impeccable, making any shift of mood as natural as possible, despite the contrast between them.

“Angel’s eyes” would be an in-between of those two, pretty straightforward most of the time, they keep it interesting nonetheless, incorporating a mesmerizing solo into their unstoppable riffage.

Shifting to the B side of the record with “March of the Ancient Queen“, the recipe changes a bit, welcoming us with foot-stomping rhythmics and a short but fitting solo. They explore a bit more here, reminding the pattern of “The Mooseriders“, using wisely changes in rhythm and intensity, to contrast and make each part stand out more. Just when you thought that this could seem a bit predictable, they surprise us by breaking up into a stoner metal frenzy, speeding up the tempo, fuzzing out, the guitars answering each other with solos, because, why not? It fits to the song and makes it shine in a way that is a bit unexpected but definitely welcomed, bringing a bit of fresh air to the otherwise despaired overall vibe.

Keeping showcasing the range of rhythm they can pull out, and contrasting with the outro of the previous track, “Prehuman Walls” brings a pachydermic doom sludge atmosphere at first, with the tortured howls of Alex Risberg piercing through the fog. Here again, they make a short break and change the tempo, coming at us full stoner metal style, with the appropriate kickass full throttle riffage and solo, before bringing back the riff… slower, obviously 😀

Last but definitely not least, comes “Dark Side Of The Earth“, the longest piece of the album, at 8:28, which is the perfect conclusion. As a sort of answer to “Gargantuan Forest”, it starts very contemplative, looking forward to the future endeavors of the Albatross‘ Crew. Despaired riffage eventually erupts in a mellow vibe, backed up thoroughly as usual by Espen Karlsen‘s drumming, and still magnified by the haunted vocals, punctuated by striking breaks. As the two previous tracks of this side, the Swedes kept another suprise for us, as they melt this down into a trippy nasty noise-infused and more melodic part, still punctuated by the same striking breaks. It breaks down to another contemplative moment, an aerial gritty melody as the eye of the storm. They build on that melancholia, playing with the intensity and intention of it to come back up, putting a last intoxicating hazy effort before the end, leaving us on a high.

At the end of time, preparing yourself for Ragnarok.
Or while jogging, when you need a kick to keep you going.

To get your dirty hands on this filthy rocker, you can choose your favorite option among the following:

Dark Side Of The Earth

Beast In The Field