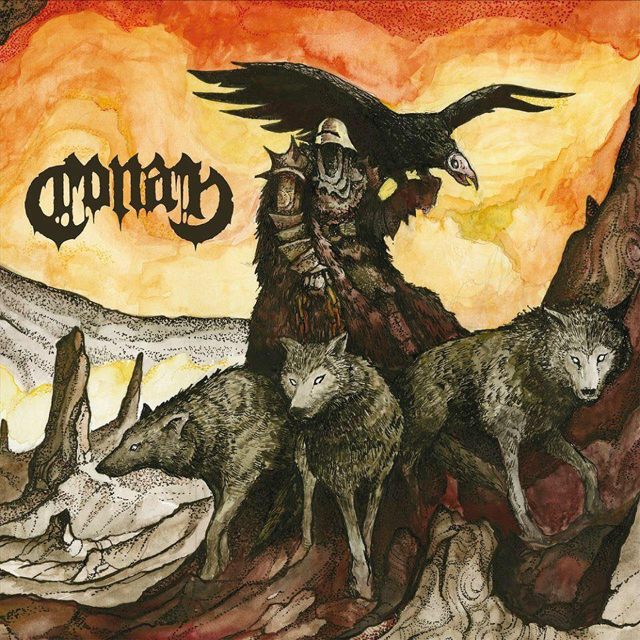 Spilling Blood and Fracturing Armour With Each Churning Riff.

Please welcome a new fuzzer in the team, Jay alias Mr. Mullet coming from the UK. He’s a fellow Heavyhead, and he also happens to be a talented artist, as you’ll see just below…

It’s often asked “What’s harder than playing fast?” “Playing slow”. Conan have now shown themselves to be masters of both.

Where Blood Eagle left me feeling adrift in an endless sea of tar, longboat splintered and sinking before me, Revengeance sees the listener’s willing remains, strewn upon burning shores, as brethren fight across waterlogged marshlands. Spilling blood and fracturing armour with each churning riff.

Yup, you should know by now our “Fat Level” only goes as far as 5. Well, let me tell you Revengeance is so FAT, we decided to create a very special Fat Level, one that is off the scale, to show this album is really heart attack inducing!

While Revengeance isn’t Conan’s most bowel rumbling of albums, I dare say it’s their heaviest. The wizards are dead. There is no match for blunt force, blind anger, and low tuned axes.

While there’s still a wealth of notes made just for your lungs to feel, and not your ears to hear, Conan really have refined their brand of caveman battle doom with this album. Tight and low as ever, the latest addition of speed to the Conan arsenal is terrifying – akin to a bear launching into full charge, only way fuzzier and twice the size.

While the duel vocals aren’t unheard of in a Conan recording, they’re definitely utilised to their full potential this time round. Ranging from drone like harmonies through to the battle charges of opposing combatants, they add both depth and despair to the album.

How Chris Fielding has managed to capture the true feeling of Conan’s incredible Green backline is beyond me, but you’ll feel every breath-crushing ounce of tone it has to offer.

The album bursts out of the gates with the mighty ‘Throne of Fire‘. Like a muscle-bound warhorse barrelling towards you, this track hits you head-on, leaving you dazed and slowly coming to, just in time to be greeted by the aptly named ‘Thunderhoof‘.

‘Wrath Gauntlet‘ fills you with blurred swirling visions of the battle before you, the creeping horror washing over you as you phase in and out of dazed consciousness.

If Revengeance is a series of battles in an endless war, then the title track ‘Revengeance‘ is its attack on the walls of Helms Deep. Brutal and epic in scale and weight. Feel the walls crumble before the might of Conan’s pounding riffs.

Where the rest of the album leaves you worn out and exhausted, ‘Every Man Is An Enemy‘ feels more like a 15ft giant, effortlessly wading through men like ants. 15ft giants are still heavy of course, each monstrous footstep resonating through Jon Davis’ signature tone, but it’s a refreshing lull in the black clouds that shroud ‘Revengeance’.

Finally we arrive at ‘Earthenguard‘. A great outro track. Victory has been achieved. Bloodied steel and scorched armour match onward to their next conquest.

Let’s see where Conan’s adventures take them next, we can’t wait!

Are you lost outside in a blizzard? Bunker down, you’re probably going to freeze to death, and here’s the soundtrack to your heart’s ever slowing pace.

Pre-order your vinyl from here; it’s orange and splattered and selling fast! Don’t wait for the reissue!

Throne of fire - All the punch and energy of a pit fighter, crossed with a few tons of forged steel!