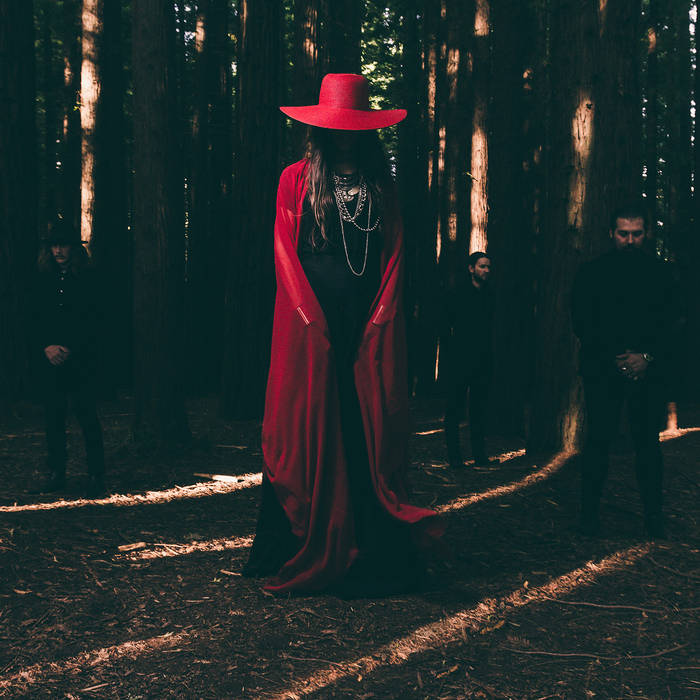 Feels like being chased through a wood by Vincent Prince himself ! ?‍♂️

The Australian Devil Electric have burst into the scene with their own brand of occult-tinged heavy blues. The bold cover of their eponymous album recalls the bold imagery of Jodorowsky’s El Topo and Holy Mountain. The band create a striking balance between bright 70s style fuzz and heavy blues with rumbling, evil riffs and pregnant silences that crash into cacophonic grooves.

The album opens with ominous rhythmic guitar-work that leads to a powerful female rock vocal worked around a down-tuned pentatonic motif. Fluttering guitar solos sound delicate next to the roar of Pierina O’Brien, who descends into velvety tones towards the end of the track.

“Shadowman” has a lushly beefed up intro that riffs on the rhythmic bound of “Monologue“, pushing the album along at a pace akin to a witch sprinting through a wood pursued by Vincent Price and a pack of hounds. The interplay between vocals and instruments is well thought out, with call and response between drums, guitar and voice.

The catchily named “Lady Velvet” lives up to its promise, changing up the belted rock vocals for a more blues-tinged swung approach. The bass makes a gorgeously evil sounding appearance during a stormy build towards a final chorus that has O’Brien screaming frantically at the protagonist of the song.

“Acidic Fire” slows down the pace and reintroduces the guitar-driven instrumentation around layered vocals with heavy gain during the chorus. The heavily distorted secondary vocal during the chorus doesn’t quite work, but it certainly adds colour to their idea of “Acidic Fire”.

Monolith is a very popular word in doom right now. You’d expect a song called “Monolith” to be slow, deep and huge. Instead Devil Electric have gone for a statically charged pounding assault that generates anticipation for the next track. “The Dove and the Serpent” hones in the focus of the album onto Pierina O’Brien’s voice as she bellows over a creeping snare that gives way to mountainous grooves.

O’Brien’s vocals are impressive but there’s little in the way of dynamic variation across the album. The songs are generally belted, with quiet moments falling mainly during periods of instrumentation, which works beautifully to create tension and release between verses. In a genre with acts such as Chelsea Wolfe, Myrkur, Blood Ceremony, Jex Thoth and Windhand combining drifting vocals with heavy instrumentation Devil Electric are certainly different, but if you look at the most vocally similar band – Blues Pills, it’s evident that Elin Larsson highlights the power of her voice with sublime yet calculated moments of pianissimo that extend for more than just several bars. “Hypnotica“, the last track of the album, is the one song where O’Brien’s voice starts to display this kind of dynamic awareness, leaving listeners with a tantalising glimpse of what could be coming next.

Go listen and decide for yourself!