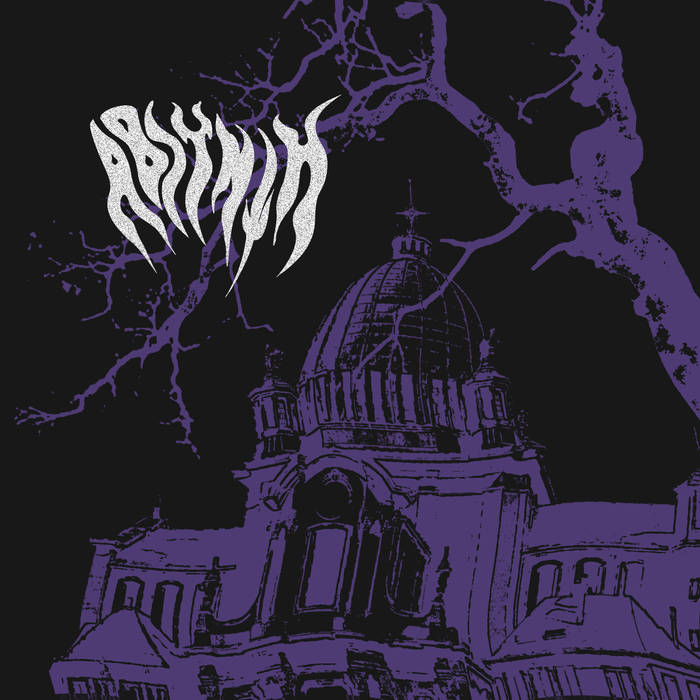 I have been looking some time now for a new band that would really satisfy my thirst for massive smoky sound with groovy riffs. I guess we all are looking for the same rush as we got when we first heard Electric Wizard or Acid King. For me, Windhand and Haunted are also right up there with those two – bands, that make you sway, eyes closed, in a ball of fuzz-extasy. As I was scrolling through new arrivals in Bandcamp this album cover caught my eye. Black and purple picture with wavy bandname in white – of course Windhand and Haunted came to mind right away. Can’t go wrong there, am I right!?

Absynth consists of four twenty-year-olds from Belgium: Antoine (Vocals/Guitars), Gaëtan (Guitars), Louis (Drums), Arnaud (Bass). The band started as a school project (yes, really) in 2015, when these guys were given the assignment to do something creative. They had never played in a group before, but decided to form a one-shot-cover-band (covering old classics like Rolling Stones etc.). After the assignment was done they kept going and now we can enjoy their debut self-titled EP.

They walk in the footsteps of the bands mentioned above, but still have their own sound (that will surely develop further if they continue) with some delightful surprises along the album. “Visions” has a slow-swinging riff-canvas by the bass and drums for throaty vocals and the guitar solo that cuts through the weight of it all like lightning.

Next track “Hate” gives more breathing space with the bass and the vocals clear up a bit, but this only leaves more room for the solo, that is beafier this time around.

Then “Hell” breaks loose! This track has the most heat to it and as the tempo rises on the third half of it you can go nuts with the headbanging for a minute.

If you make it past the bluesy intro of “No Exit” you are greeted with the laid back and fuzzy atmosphere (if you love doom, the vocals should not be too much for you) and a nice juicy solo (it’s so short it’s criminal). And then they slow down the track nicely.

But all this feels like showcasing (well, it is a debut EP) before the last track “Satan“ where they bring all together for one massively great track. Tension from start to finish with an ominous main riff, raspy yet clear vocals and a damned epic solo.

I have been listening to this in my car, at my office, at home and on headphones when I am taking a walk. Because it’s an EP it ends too fast each time.

These are just 4 20-year-olds who started a cover band two years ago. Now they have done something that deserves attention and gives anticipation for the future. At least I think so.