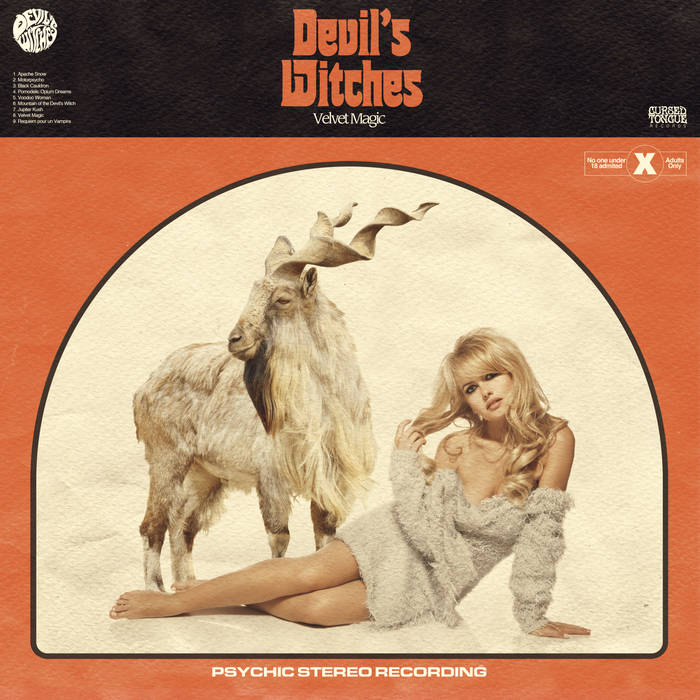 60's Worshipping Doom from the UK

It actually took me a while to come upon the British newcomers Devil’s Witches and their amazing debut album, Velvet Magic out on Cursed Tongue Records, so I made up for lost time and immersed myself into their retro-psycheledic doom so deep, it’s been hard to let go of the album.

I know what you’re thinking and no – this is not another one of those Electric Wizard ripoff bands like we’ve been bombarded with over that last few years. Devil’s Witches have the mojo and the originality needed to distance themselves from the hoard even while implementing the same aesthetic attributes as the rest. From Apache Snow to Requiem pour un Vampire, it’s an immersive retro-fueled psychedelic trip with a dense, dark atmosphere to it – even in it’s relaxing moments such as the keyboards-based instrumental “Pornodelic Opium Dreams“, reminiscent of Sabbath Bloody Sabbath’s Fluff.

Velvet Magic starts with three fuzzed out tracks with unique particularities. “Apache Snow“, one of the many standouts here, has a Witchcult Today introduction that fools the listener as it quickly gains energy and speed (in a good way, trust me). But it’s that breakdown after the second chorus that shows us who we’re dealing with here. It’s a showcase of amazing guitars and keyboards that part itself from the ordinary – and goes to the criminally unexplored side of 60’s worship bands. And this keeps up until “Pornodelic Opium Dreams“, one of my personal favorites.

After the surprising out-of-the-box “Voodoo Woman” is “Mountain of the Devil’s Witch” – the longest, and perhaps the heaviest, track on the album. There’s a lot of traditional doom going on here – but with a pinch of Sabbath goodness, of course. This riff-fest of a song is Velvet Magic’s the highest of peaks, delivering its most intense moment all the way. The wah-driven instrumental “Jupiter Kush” serves as a catch of breath before the title track – the last fuzzy track before “Requiem pour un Vampire” – a bluesy, chilled track with some brilliantly executed bossa nova moments.

This doomy gem deserves your listen, and you deserve it too. Do yourself a favor and listen to this album. Thank me later.

Mountain of the Devil's Witch