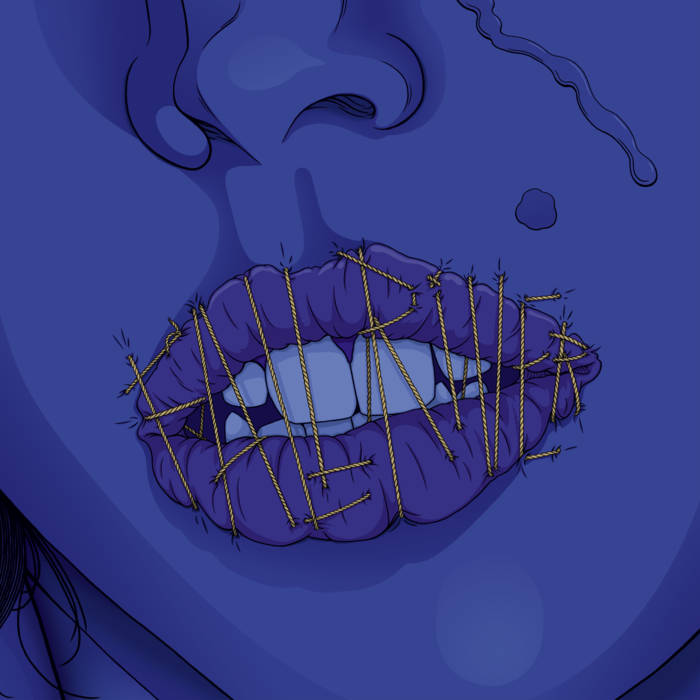 Dorre is back again and I am very glad about this. For the first time they present a full-length, 34-minutes, catchy-artwork-looking album with 6 tracks. Well, who is Dorre again and how do you pronounce their name properly? First of all, Dorre is a four-headed instrumental band with drone, psych, stoner and noise influences from Belgium. The pronunciation is an unsolved mystery (at least for me) and several attempts by fans can be found in a video on their facebook page.

Dorre is not signed to a label and I personally really don’t care about that in view of delivering good and true music. I’ve had the good fortune of messaging with guitarist Adriaan so I got a clue how much effort and passion went into this piece of art and this is especially intense for bands releasing an LP on vinyl without a label (as experienced myself with my band’s recent release).

The cover art shows a female (?) face from nose to chin with a tear on the cheek and an half-opened but sewn up mouth saying “Fall River”. Is this a person being tortured? Or is it just a metaphor for someone who struggles about telling something precarious? Who knows. Great artwork by Frederik De Vlamick.

Let’s start off track by track – “Satisfying Sadistic Urges” begins by hitting it hard and percussive. Repetitive and alternating with an ascending and descending figure which is mysteriously majestic telling you “better get yourself ready for a good portion of loud and heavy tunes!” There are pictures of an old cog in a storm riding up and down the waves inside my inner eye. Suddenly calming down to a bluesy break, fuzz is added and the song emulges in a heavy fuzzy direction – caution hot! Reversing back again to its percussive face the first track ends and leaves a great intro for the album.

Second track – “Force The Victim” – gives me oppressive feel at the beginning but it’s dissolving into a releasing riffy and pumpy machine, a nice progressive touch here which i personally like. If you’ve ever played “Destruction Derby 2” in your youth you might be familiar with the heavy instrumental progressive band “Jug” and/or their soundtracks for the game. This song’s got some severe similarities and I love it. Near the end of the track I realise the doom-component of this song but it’s not dominating and this is very positive to me. It’s not that I don’t like doom but I’m always going for a good mixture of influences which has been made here and throughout the whole record.

Third track – “Maximum State Of Emotional Arousal” – is initiated by a rather easy gateway. It’s getting more percussive and a bit faster but never busts the border to a serious intensity. Followed by a round psychedelic-doom part I’m feeling lifted, at least a bit. There’s not much catching my ears’ greater attention at the first listen but the dragging theme that returns occasionally is kinda cool. On the other hand, I like the breaks which occure now and then (and all over the album) and I’m starting to feel that Dorre implied recurring audial figures in their songwriting – as heard at the end of this song as well. After several listens I started to really dig this song. Didn’t expect that on first glance, but this is probably my favorite track of the album.

Fourth track – “The Greatest Amount Of Life Force” – Instantly kicking it, the double-bass is driving the fuzz train. Cool dorian melodies applied here – It’s the little things that spice the uniqueness of the album! Short track but definately has something special.

Fifth track – “Extracted At The Moment Of Death” – Welcome to the desert of stoner metal, some classy vibes and certainly a more conventional method of composing here (not necessarily negative!). A few seconds after noticing this attribute the reason seems to get clear: Vocals! “What, i thought Dorre’s pure instrumental stuff” – Well for this song they managed to work together with scottish singer Laura Donnelly (King Witch) who did a great job on turning this song (which btw took about 3-4 years to finish in its final excellence) to the one-and-only vocal track of Dorre. The outro convinces with a high and heavy headbang part, coloured with an endless trance-like fuzz-octaved guitar solo. Cool.

Sixth track – “Fall River” – Here we go, last track, named after the album title. So there might be high expectations on this one. Smooth and jazzy intro – alternating with a percussive drive. We don’t know yet where it’s gonna lead us to. Adding a bit of psychedelic solo mid-track before someone’s turning the speed knob counter-clockwise. Now we know where it’s gonna go. Follow Dorre to hell or in this case “fall with the river”. There are pictures in my brain constituting a river leading into a water fall but instead of getting faster it’s just slowing you down big time until you finally hit the bottom…or the burning eternity below. As I’m writing these words the possible meaning of this and other songs emerge in me. Since this is a concept-album there might be a golden thread I can’t interpret entirely at this time. I might be totally wrong with my pictures but – that’s the cool thing about music – it’s art and you can take it any way you want.

Since the last time I wrote a review about the Dorre/Bethmoora Split, Dorre’s overall sound changed, but I wouldn’t say to a huge extent. The new songs as well as the production benefit from a evolutionary process which shaped the contours and adds edges to the overall outcome. The production is well balanced, powerful and honest. It’s raw and huge at the same time and it never sounds over-produced. This release might require 2-3 listens (at least for me) until it infolds its entire beauty. Dorre, please keep your mix of influences! That is what makes you stand out of the mass.
To conclude, they’ve created an excellent an honourable debut which will long remain in our memories.