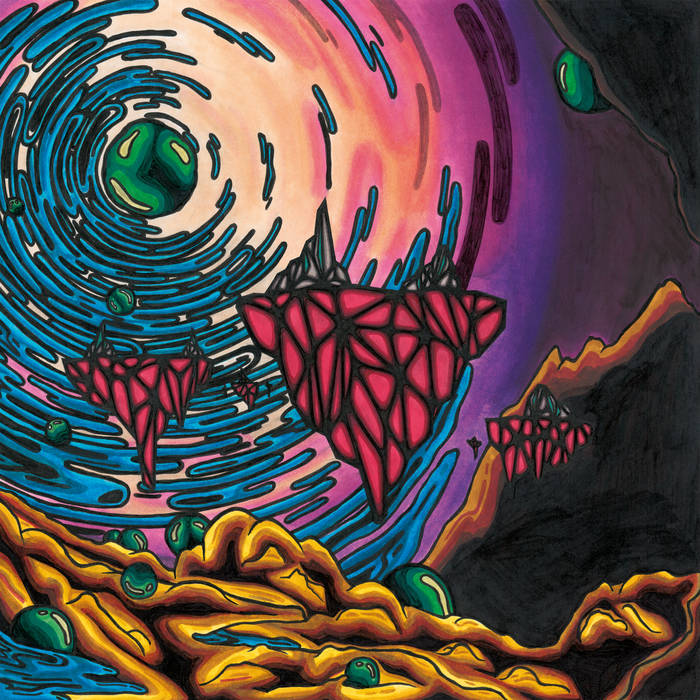 In the family of German Heavy-Psych, I ask for the last sons ! Growing up in the country of Electric Moon, Colour Haze or My Sleeping Karma seems to give ideas to fuzzy minds. Coming from Rostock, Gorm follows the path of its prestigious elders. Their debut album works as a direct flight to the confines of our solar system.

When I listened to the first track “Rhea”, one band directly came to my mind : Elder. This feeling followed me during the whole listening of the album, and well, it is good news ! Back to the first track, soft drumming and a hazy guitar set a space odyssey scene. Fuzzy guitar chords and licks alternate in the same way as American masters Elder, creating a whole universe of psychedelia. Exploration becomes harsher as the sound comes to a more epic section. Sharp palm mute guitars riffs give a taste of metal influences while they add thrilling feelings to the sound.

Second track “Hyperion” encapsulates all the band’s mastery. First notes remind you the previous song and bring continuity to the album. After this remarkable transition, the track drops into energetic passages as drumming becomes more and more powerful. Enlightened arpeggios and harmonics unveil incredibly rich soundscapes that you would like to admire for hours. From mesmeric passages, sound progressively becomes louder and crashes into super epic Heavy-Psych section. Then wait for the apex with this delicious guitar solo and you will feel as if you were the hero of one of your favorite sci-fi novel.

Third track “Hydra” begins as an Elder-like intro. The melody flows as pure spring water and reinforces the sensation of exploring new exotic lands. Then the sound alternates between mesmerizing soundscapes where tension increases and psychedelic stoner sections where thicker riffs are kings. Changeovers really give an impression of endless space odyssey.

Adventures from deeper space continue in the next one “Triton”. It follows the same logic as previous ones, alternating paces and atmospheres, in a pure Elder style. I particularly love the end of the track with this progression in heavy riffs and hard drumming. Just close your eyes at this time and you will be steering your space vessel in the middle of an interstellar battlle. “Calypso” constitutes the last track of the cosmic journey. It concludes the trip properly,  with last supersonic rushes and psychedelic guitar licks. It ends in an ultimate electrified and epic atmosphere.

Overall, I cannot pretend Gorm revolutionizes modern Heavy-Psych rock but still, the performance remains impressive. With their debut album, our German fellows show a great mastery, taking inspirations from Heavy-Psych masters. It is promising for future productions. And it might already be one of the most consistent space rock LP of the year. Yet they play like old wolves !