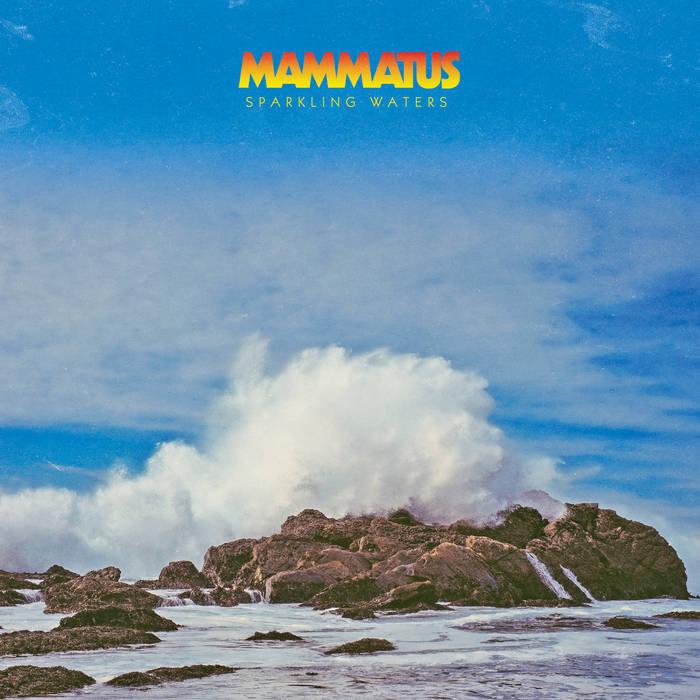 Sparkling Waters is Mammatus’ 4th album, after 2013’s “Heady Mental”. If you’ve been following these guys from the start, you’ll have noticed their sharp change in musical direction on that release. They moved away from the doom-tinged elements of the first two albums and have now ended up (as they would put it) POST WIZARD NEW MAGE FAR OUT CASUAL. Now that has to be the best name for a sub-genre of all time, ever.

Part way through this album I found myself asking: When does the purpose of music stop being just entertainment and start being an experience?

“Sparkling Waters Part 1” starts things off modestly in the beginning, and then rips into some sick riffage. 4 minutes of atmospheric guitar/synth build up, more phaser and reverb than you could possibly know what to do with, spacious choir-like vocal harmonies, inspired guitar solos…its got it all. There’s even a flute section that harkens back to the likes of King Crimson! The production really captures that late 60’s/early 70’s vibe in places, like they just stuck a microphone in the middle of the studio and hit record. It’s a joyous expedition that drowns you in atmosphere and snowballs in pace towards the end.

“Sparkling Waters Part 2“, perhaps the antithesis of Part 1, is a real test. Nuanced and weird to a fault (for some reason that bit-crushed keyboard sound made me think of the Portal 2 soundtrack!), most of this song moves glacially slow, lost in the ocean of space.  This rides that line between entertainment and experience with reckless abandon. There are points when it’s so spacious that it lost me, or maybe I got lost in it – It’s far too hard to tell. It’s as if this track is locked in slow orbit, waiting ominously to be awoken. But fear not weary traveller, awake you shall.

When Han Solo made the Kessel Run in less than 12 parsecs, you just know he had “Elkhorn” blasting from the Millennium Falcon’s speakers. Mammatus put all thrusters into overdrive here and cautiously advise you hold on tight as you skim past asteroids at breakneck speed! OK so Star Wars analogies aside – THIS IS SUCH A TRIP! It’s an exhilarating ride that is almost scarily visual. The best bass and rhythm sections of the whole album are to be found here, and that astral groove is sure to take you with it.

Closing track “Ornia” is the fattest sounding entry and there are some incredible riffs here too: the main theme is just awesome! The scope and variety in sound and rhythm are daunting; so many different sections and so many different moods that my brain hurt by the end of it. Parts reminded me of Sleeps’ legendary “Dopesmoker” – those disjointed bridge sections that link everything together.

We fuzzers use the term “mind-blowing” a lot. It’s a defining part of great heavy psychedelic music when it pushes you to another level. Everything on this album is pushed to another level. Mammatus have pushed themselves to another level. There are so many moments of quiet reflection between the heavy sections that each and every one of you will probably take away your own unique impressions. Some of you may get lost along the way – I’ll admit I was at times – but for those daring enough to try, there is a landmark achievement to be heard.

When does the purpose of music stop being just entertainment and start being an experience? Mammatus just took one step closer to finding that out.

Two options: either alone late at night in your room to really go balls deep OR stick it on in the background while friends are round, then every few minutes turn to each other and ask “What the fuck is happening?”

Want something to really blow your mind? They’re a 3 piece. What’s more, they recreate their sound excellently live.