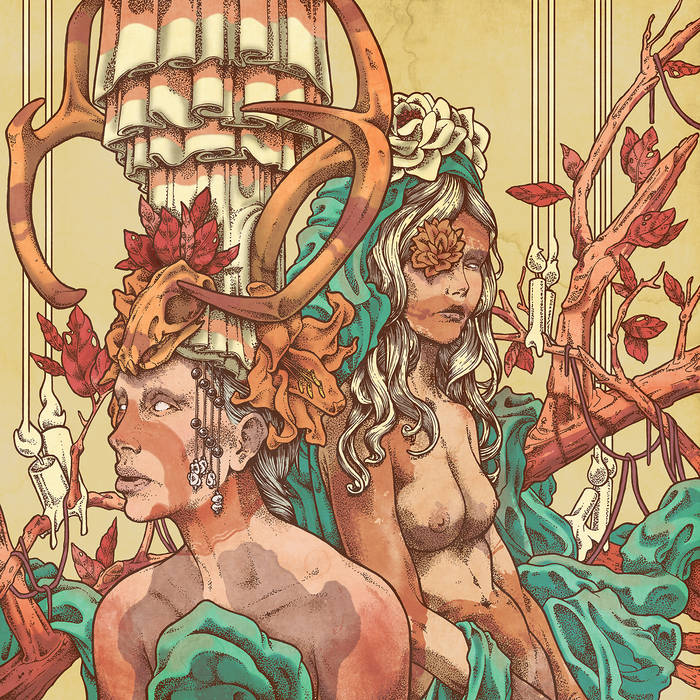 Heavy-Acid-Blues Dripping All The Way !

Hey my fellow fuzzers, long time I haven’t written a review, so it was time I kicked myself in the ass 🙂 If you’re following the blog for some time now, today’s band might remind you something… Yes, indeed, I already featured this Portuguese Heavy Blues band back in February when they released their first EP “Fuzzadelic”. But only 3 tracks were really not enough to appreciate their bluesy-touch and those fabulous female vocals, so I wanted more from them !

Well here I’m served, The Black Wizards are back, this time with a full-length which sounds deliciously fuzzy, bluesy & hazy, way more powerful than their first release, let’s deep dive into the “Lake of Fire“…

First thing that stroke me was indeed “the sound”, by that I mean the production of this album is just miles beyond the “Fuzzadelic EP“. It definitely has that retro vibe, and when you know they recorded the whole album in a live setting in only 24 hours, you understand those 4 talented musicians simply played with their guts, for the love of music, for the love of fuzz !

The first few notes from “Pain“, the first track of the album, will directly light up a part in your brain, I don’t know which part, but this huge, raw and fuzzy guitar sound should tell you something like “Hmmmm ok, this sounds badass, let’s hear more 😉 “. And when Joana’s vocals kick in, that part in your brain will just enter in fire and you should tell yourself “Yeah we’re into a biggy here, let’s RAWK !“.

And be ready because it’s only the first spell for those Black Wizards put on you, the next one “I Don’t Mind” is just as groovy as a good ol’ Radio Moscow song ! Blasting killer fuzzy riffs, acid-dripping guitar solos, it’s a pure pleasure for your ears !

The catchiness continues with “Waiting For A Train“, but then the smoke becomes thicker with “Blindfold“, slowing things off for a darker and even fuzzier sound, time to blow one up, oh my god this is good..!

The temperature level rises up again for “Gypsy Woman“, Joana shows us again how talented she is, easily competing with Elin from Blues Pills. It’s sexy, it’s bluesy, it’s sweet, it’s gritty, I love it ! Hope these ladies will inspire more and more other women to try taking up the mic 🙂  The 9-minutes song ends with a 2-minutes killer drums solo, so damn cool they decided to do this, it just feels like we’re in the middle of a Led Zeppelin gig, bring back that honest 70’s vibe baby !

“Lake of Fire” is in the same trippy & smokey vein as “Blindfold”, both lasting 7:42, what a coincidence 😉 Time to blow up the 2nd one…

“Wicked Brain” goes even deeper in the heaviness, it’s the longest track of this record and the one with the most “jammy attitude”. It starts with that uber-fuzzy riff, almost feeling like a doom song ! But let’s not speak too fast, our Black Wizards know how to add that groovy and bluesy layer, particularly during the 2nd part of the song with a long & trippy guitar solo, making the whole thing very pleasant to hear.

So yeah, hats off to them ! This record will, without hesitation, ends up in my Top Albums of 2015, I was really surprised by how they improved in less than a year. With “Lake Of Fire“, The Black Wizards clearly position themselves among the best bands in that Heavy-Acid-Blues genre Radio Moscow started some years ago. Every song is just so catchy, difficult to not move your head like crazy, and I think they can even appeal to the doomier crowd, with those darker, heavier parts and this huge fuzzy sound 😉

Hope they’ll tour in Europe soon, so that I can feel the sweat dripping my hair and hairs 🙂

They're all so cool !