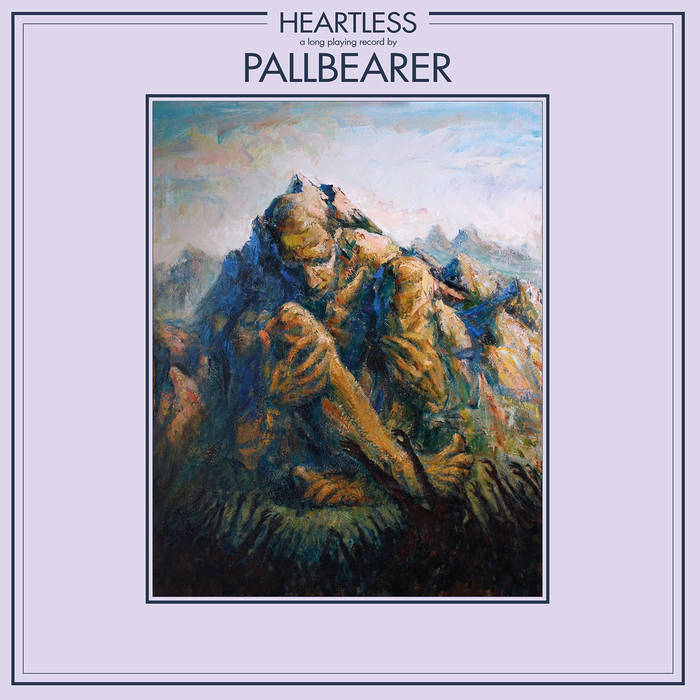 Pallbearer - Heartless is a mix between the musicality of Opeth's Morningrise, the heavy distortion of Isole, with each instrument as sharp as a razorblade.

One of my favorite albums of all time is “Morningrise” from Opeth. The reason being the 3 independent guitars, overlapped in sync with the harmony of the song, making good use of the scales and greek modes, showing complete independence and creatively exploring the harmonic fields of each played chord. Opeth’s “Morningrise” was always a reference when it comes to this unique characteristic regarding the twin independent harmonic guitars and bass. Then, Pallbearer’s “Heartless” comes along.

The album starts already heavier than expected from a doom metal band. Their base tuning is A, which is usually too heavy for most metal bands (I only know three or four bands that use this tuning, on all genres, including death metal). The vocals are chiefly performed by Brett, who bespeaks clear technique and accuracy on the notes. His vocal performance sometimes scratch transitions that prompts the vocal style of Jonas Renkse, mostly in his work on Katatonia’s “The Great Cold Distance”, and some other parts evoke Portrait’s singer Per Lengstedt, even though their genre has very few parallel elements. Brett’s acrobatic voice shows a bit more amplitude than usually expected for his kind of tone, some songs are definitely not easy to sing and he quietly skimmed through them like an oil slick on a cold lake. Devin and Joseph sometimes also join in with soothing backing vocals.

The instrumental is often melodic (with a dark atmosphere) and slow, although the album enables the listener to identify separately every song even if they’re not paying proper attention the record, primarily because every song has its pace, usually slow, but the riffs density and their melodies make them unique. Two songs in particular stand out from the rest, drawing the attention of the ones that follow the band since the first album: “Thorns” and “Cruel Road“. These songs are probably the fastest songs ever written by the band, yet they sound natural and beautiful, some parts of the songs even tips the kind of melody and mood Roger Waters would present if he had a doom metal band.

The mixing and mastering played a huge part in the deliverance experience of this material. As soon as the album starts all instruments make themselves noticeable, the channel mix rendered the axes cutting through, with nothing being muffled by anything else. The drums are perfectly compressed, never getting too loud or too low, even when it crashes all the time as it can be noticed in the song “Dancing in Madness“. But all that doesn’t necessarily mean that the album is overproduced at all (and in that, it also doesn’t mean that it is a bad thing, just saying).

“Dancing in Madness” captures a doomish mood for the most part, starting with an obvious Pink Floyd reference, denoting that the members of the band know where to drink from a reliable source of art. Some of the drum lines shows a different approach to the ending fills of some measures, reminding Opeth’s ex-drummer Martin Lopez’s fill lines. After the song’s half mark, a heavy chugged riff – very inclined to old school death metal – comes up, being pumped up by the double bass perfectly developed by Mark Lierly. This is probably my favourite part of the entire album. This song seems to be the heaviest of the seven long songs that composes the album, which brings us to the pattern of the song lengths. Most of them are around 7 minutes long, with “Thorns” being the most brief one with almost 6 minutes, and two very interesting songs longing for around 12 minutes each.

“Cruel Road” is probably my favorite song of the album, followed by “Dancing in Madness“. However, “Cruel Road” is unique as for its melodies with a faster pace than normal. The overlapping melodies are very strong in those songs, even though it can be seen throughout the whole album, since wherever you drop the needle, there they are.

Pallbearer has once again shown that they are experienced musicians. This album will probably be a milestone for the band and also for the listeners. The melodies are unique and they will linger in our mind for a long time. So, come on aboard and become “Heartless” you too. I’d dare to say that I would eat my own hat if a doom metal fan won’t enjoy this masterpiece.

Kult Of The Wizard – The White Wizard Review