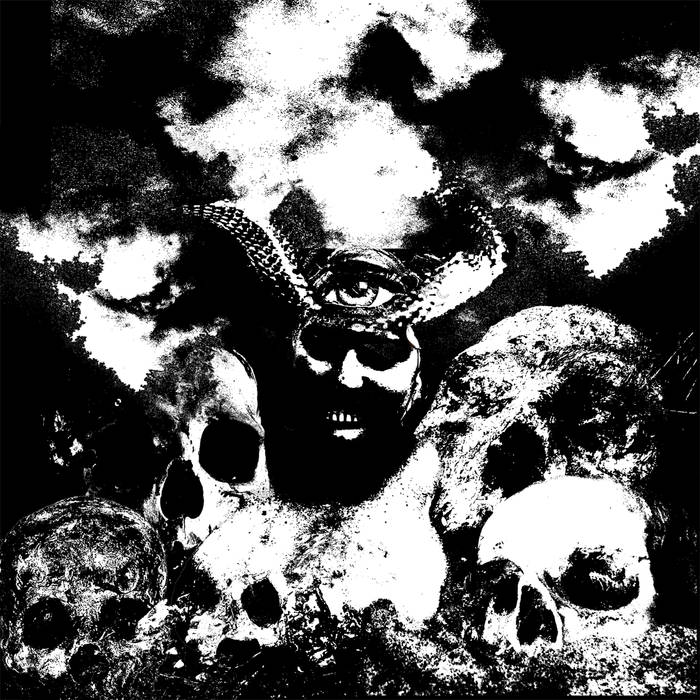 Doom of the Blackest Shade.

The great thing about reviewing any type of doom is the monumental track lengths – without these you wouldn’t be able to appreciate the magnitude of the genre’s weight. Modern symphonies in the key of black, and here I review one of the darkest shades.

Primitive Man get the first turn on this release with the brilliant opener, “Cold Resolve“.

With a classic feedback-style intro, your hairs are already on end with anticipation. When the first chord hits, you can feel the straining of components. Crackling distortion with relentless depth. “Cold Resolve” pulses with honed feedback between every hit.

Vocals roam between corpse-like guttural screams, and pure hate. As the song progresses you can almost feel chunks of rotten throat tearing away and spraying forth. The beatdown is heaving and falls away to a cold black void. Falling through the vacuum of space you begin to catch against the smog-filled atmosphere. Harsh biting air rushing past your ears, the wind building to deafening levels of feedback, Primitive Man have written one hell of a ride.

“Servant” chugs heavily to life. Sounds of corrupt metal, beaten with mindless repetition. Tormenting abuse breaks way into angered thrashing. Again, the vocals are both guttural and throaty simultaneously, as though ripped from the singer’s throat as opposed to willingly sung. My throat hurts listening to it. “Servant” leads out with a clunking march towards Sea Bastard’s domain.

Everything about Primitive Man’s part of this split crackles heavily with distortion, and reeks of festering death…in the best possible way.

With one song by Sea Bastard on this split, you might be fooled into thinking something’s been missed. It’s not until you realise Sea Bastard has slipped a near 20-minute long epic track onto this split that curiosity becomes the name of the game.

“The Hermit” opens low and fat, with the distant ring of an amp on standby, poised to receive its first thunderous note. The band pushes through as a whole, into a wall of fuzz. Slow isn’t the word. Thumping fills and tight bursts of kick are all that remind you that the song is moving. The tempo is hypnotic. A raging sea in slow motion. A wave that takes a century to crash.

Vocals creak and wail like the bow of a ship. On the scale of vocal abuse, Sea Bastard’s fall towards the realm of human, as opposed to Primitive Man’s posthumous tones.

It’s hard to pinpoint at which point “The Hermit” picks up the pace, seemingly hypnotised by the opening portion. Suddenly you’re no longer in slow motion and the blackness of the unrelenting sea is crashing down hard, leaving feelings of disorientation and an overpowering urge to rock your head in time to some real heavy riffs.

The song leads out with Sea Bastard watching you from above the surface, as your limp body falls silently down into the endless dark beneath the waves. Sparse and slow notes ring out, overlapping and churning. Build to the sound of your pulse thudding in your ears, as your entire being becomes waterlogged. The octave cutting, feedback building. Heavy. Then nothing. A damn good song.

Fill your human skull bong with some pustulant coffin kush and enjoy the ride.

The split is to be released on vinyl in a wave of 500 copies on 180g vinyl.
Careful, it’s the heaviest Split you’ll ever drop on your platter.