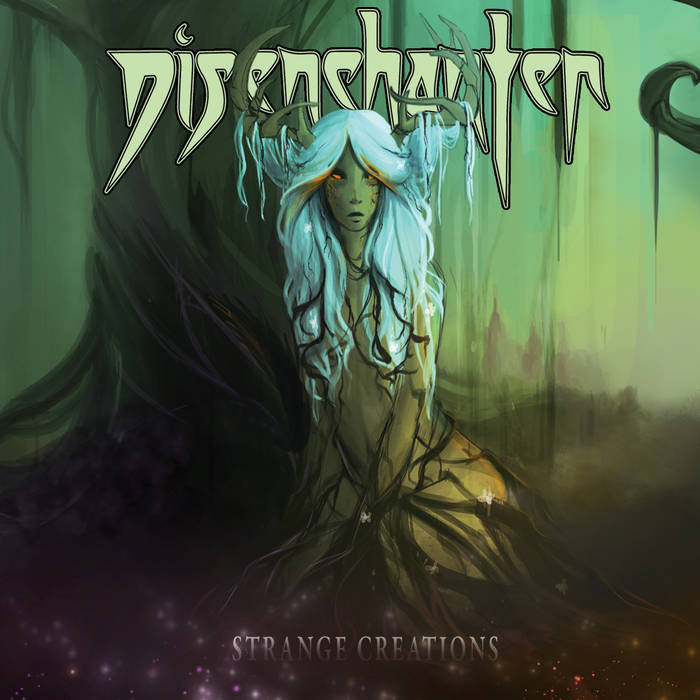 Prepare to be Enchanted, this Band will Transport You to a Land of Fantasy & Magic !

Disenchanter is a Stoner/Doom Metal trio from Portland, Oregon, active in the local underground circuit for the last 4 years. They released their first two EP’s “Back To Earth” and “On Through The Portals” in 2013 and 2014 respectively, and also appeared in two of Doomed & Stoned compilations (Doomed & Stoned In Portland and Doomed & Stoned In Oregon). This early material showed us their skills to play heavy and uncompromised heavy music. So with all this material, you probably knew this band would be destined to great things, but we didn’t know it would be that GREAT!

The moment you have the album in front of you, you can appreciate the elfish cover art made by the talented Amy Morris, and somewhat you become intrigued about the music of this “Strange Creations”. So, when Joey DeMartini (bass) and Jay Erbe (drums) hit the first notes of “792”, following the powerful riffs and the amazing pipes of Sabine Stangenberg (guitar and vocals), instantly you know you’re in front of one of the best records of 2015. And if you add a high steam song like the following, “On Strength Of Stell”, you’re hearing one of the most “ass-kicking” starts of any album of the last years.

For the title track, the band lowers down the tempo a little bit. On this one, I really enjoy the bass arrangements and the lyrics that are kinda sci-fi and dystopian. “Green Queen” is constructed over heavy riffs and loud drums, with lyrics recalling Hendrix’s “Purple Haze” and Sabbath’s “Sweat Leaf”, I still don’t know why

The second half of the album is reserved for the doomier and longer tracks. “Sorceries” is slow, heavy and scary. On this one, the band pumps up the amp volume to 11 and Joey pushes his feet firmly on the fuzz pedal to create a distorted and somber atmosphere. If you add the excellent guitar solo and the desperate cries of Sabine, you have an excellent Doom song. The atmosphere created by this song continues with “A Thousand Times”. The album closes with “Snakes Of The Earth”, the longest track hitting the 12-minutes mark. The lyrics are a personal favorite on this tune, the band transports the listener to a fantasy world, in the vein of those where the adventures of Conan or Elric of Melniboné are developed, to witness the historic struggle between good and evil.

When the album comes to an end, you can recognize the trio’s amazing musicianship, they have become a tight unit delivering some of the strongest riffs and the most memorable melodies of the past year.  Add to that the strong vocal performance, and as I say before, you have one of the best album of 2015.

Check their Bigcartel shop, the band offers t-shirts with amazing designs, some of them created by Sabine herself! Also, if you’re a fan of physical formats, NoSlip Records are releasing their two EP’s on one CD and “Strange Creations” will have a vinyl release thru DHU Records in the next months.