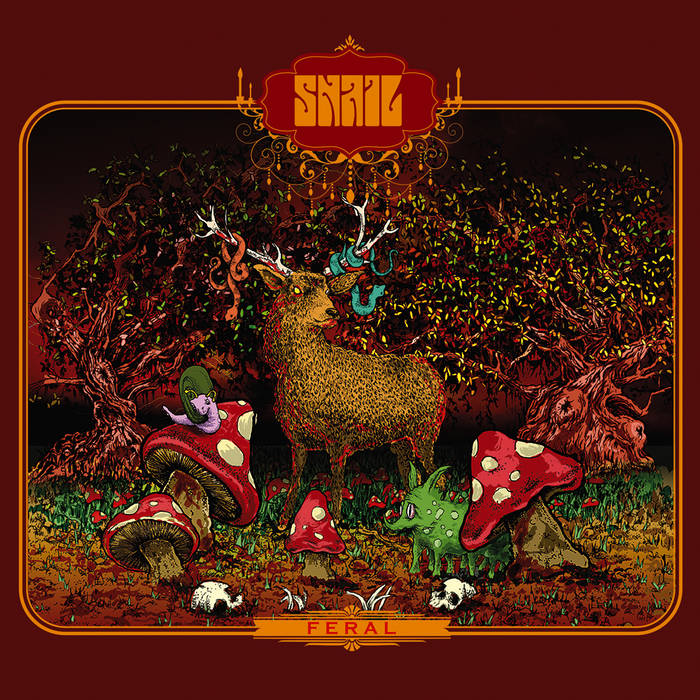 US West Coast Veterans Only Get Better with the Years

The United States’ Pacific Northwest region continues to develop strong musicians and huge riffs long after its heydey that championed the greats like Nirvana, Earth, the Melvins, Soundgarden, and Pearl Jam. Snail has been around for pretty much the whole time, and they never went through a bad phase. Their latest creation, “Feral,” is a well-thought, carefully constructed group of songs that all stand on their own, with great riffs, strong rhythms, and cohesive vocals. The album flows like one from the 90s, too; each song encapsulates its own vibe while staying true to the sound that fits the band name about as well as it could: slow, constant, Snail-like.

This album is not cold, heartless heavy metal. Snail’s sound drifts in and out of your head, prompting different feelings, different vibes, and pulls them all together in a swirl of well-crafted songwriting. Songs like “Smoke the Deathless” and “Born in Captivity” really bring the power, when later, deeper cuts like “Psilocybe” and “Come Home” build a spectrum of feeling, emotion, power, and might. Whether the song is 4 minutes or 8 minutes long, each song takes you on a different journey that pulls you through the entire album without wondering where your time went.

“Building A Haunted House” opens the album beautifully, with strong rhythms, heavy rhythms and psychedelic, swirling guitars. This is not a sound that disappears, but rather blends and evolves throughout the album, best exemplified by “Thou Art That“, the album’s longest track. Traditional strong structures (verse/chorus/verse/chorus/bridge/solo etc.) ring throughout the album, providing what I think the entire vibe of this album is: comfortable, relaxing, deep, and heavy. “Come Home” is fucking awesome. What an amazing song. It starts off with a 90s Alice in Chains (maybe even Blind Melon?) style song that just builds and builds up to a swirling, ethereal guitar solo that closes out the album. I don’t think that I have heard sound evolve in such limited time increments before “Feral.”

Really, do yourself a favor and listen to this.

Snail has been doing this for just over 20 years. These guys are veterans whose sound stands the test of time.