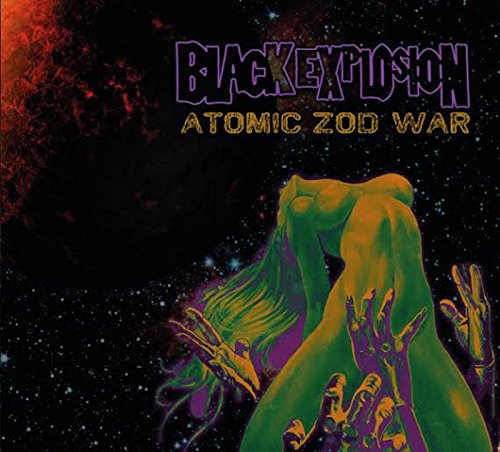 A Taste of Something New From a Quiet Band...

The Black Explosion is a Swedish Retro/Heavy Psych band that has been bringing fuzz and groove to the masses since 2011. They currently have 3 full-length albums, one of which was released just a few weeks ago under the title Atomic Zod War. The Black Explosion bring some new elements to the table on this new album, so be sure to check it out!

Atomic Zod War is a bit different from the previous albums because of the rather long opening track, “Paralyzed”, the different production/mastering, and inclusion of an interlude type of song. “Paralyzed” is not the longest song The Black Explosion has ever played, but it’s the longest on Atomic Zod War and has a division in it around the half-way mark. This half-way mark separates the slower, almost doomy part of the song while the other part is much quicker and true to The Black Explosion’s core sound. I’ll venture to say “Paralyzed” sounds a lot like a Black Sabbath song and not just because of that main riff. The way the song comes full circle plus the way the bass treks on through the 6 minute or so break is very Sabbath-like.

What is The Black Explosion’s core sound, you ask? The Black Explosion is really good at having a steady (and slightly fuzzy) bassline behind some moving guitars. The guitars play quick licks or repeating riffs while the vocals take off. Atomic Zod War does have all of that, of course. The energy behind Atomic Zod War and the overall sound are new. That does not mean their previous albums did not have energy, but there is just something about Atomic Zod War that tells me The Black Explosion put more of themselves into this album. You can hear that the band had fun creating the music and wanted to create something enjoyable.

That’s exactly what they did, too. In older music guitar and bass effects were used, but they seem to be cranked on this album. The guitars are dipped in fuzz at all times with peaks of other effects like phaser and wah coming in. The way some songs can go off tangent make Atomic Zod War go in a more psychedelic direction with only the drums and bass keeping you grounded. “Location 9” and “Ain’t Coming Home” are the two that blast off without warning and maintain a constant level of high energy. Those two songs have it all: groove, fuzz, effects, fuel, bass, and movement.

There are also two really groovy, head-bobbing songs on Atomic Zod War: “Devil Inside” and “Get My Mind Together”. They are rather different from each other and get you moving in different ways. “Devil Inside” is much more straightforward with its groove and fuzzed progression. “Get My Mind Together” is more lenient with how things progress. It keeps things on the down low and cool, like jazz musicians (I’m not saying this is a jazzy song). When the hook kicks in and gets loud, it sounds great because of how anticipated it is. “Get My Mind Together” is the only song on Atomic Zod War that plays on a build up like that and contrasts quite a bit to the other songs.

Atomic Zod War gave us a taste of everything The Black Explosion can do with the variety between songs. While Atomic Zod War wasn’t a totally new sound, it brought us a new feel with new tunes and that’s more than I could have asked for. Needless to say, I enjoyed this album and I think you will too if you like trekking basslines with groove, lots of fuzz, and songs that go off on solos and atmospheric breaks.

This is the kind of album one would throw on after you had a good day and want to continue good vibes with some rock that’s in high gear.