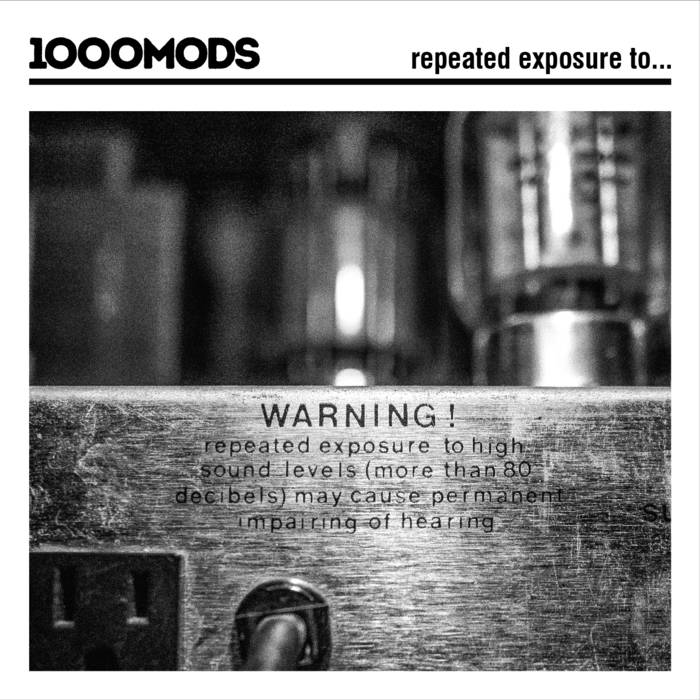 Warning! Do repeatedly expose yourself to this thunderous Stoner Rock LP from Greece!

One of Greece’s heavy rock prominent bands, 1000mods released their third LP with their familiar heavy and rich sound but this time perfected with their experience for your sonic pleasure! Catch them touring central Europe right now.

“Repeated Exposure To…” is the third effort from Corinthian based Stoner Rock band 1000mods. The cover (a photography by Aris Panagopoulos and layout design by Fuzz Ink.) gives us a hint about the vintage equipment (Sunn model T) used by the band but the real deal is the first pummeling riffs.

Songs like “Above179”, “Loose”, and “The Son” feature a heavy riffage by George and Giannis with their familiar thick and rich sound. Beside these doomy attacks you can find tracks like “Electric Carve” and “A.W” that are more ferocious and incorporate punk-ish and grunge elements respectively. The last two tracks echo the previous LPs by the band, “On A Stone” being a headbanger’s anthem and closing “Into A Spell” typical in their tradition of ending their albums this way a huge & epic sounding track.

They did not create a whole new world cut off their previous efforts but their stoner/desert sound from “Super Van Vacation” days (wow, 2011 seems like ages ago!) became here a “wider” soundscape. It is filled with groovy rock, some heavy bluesy stuff,  grunge aggressiveness, and their personal favorites of jamming in a song extensively.

The final product bears their personal seal with a distinctive maturity gained over the years, and sheer professionalism attached to their commitment. No extreme makeovers here but small and secure steps in terms of vocals where the performance is structurally in better terms while the rest of the band delivers with passion either in terms of rich guitar sound or merciless drumming.

The album is out now by the band’s label Ouga Booga And The Mighty Oug Recordings and produced and mixed by 1000mods and George Leodis, engineered by George Leodis at Wreck It Sound Studios in Corinthos, Greece during summer of 2016, and mastered by Brad Boatright (Sleep, Corrosion of Conformity, Nails, Beastmilk, Obituary, Yob etc.) at Audiosiege Studios, in Portland USA.

1000mods embark on their European “Repeated…Tour 2016”along with Monkey3 and Moaning Cities for a whole month throughout central Europe and big festivals like “Up In Smoke” in Czech Republic, Keep It Low in Munich and the Belgian and Greek editions of Desertfest 2016.