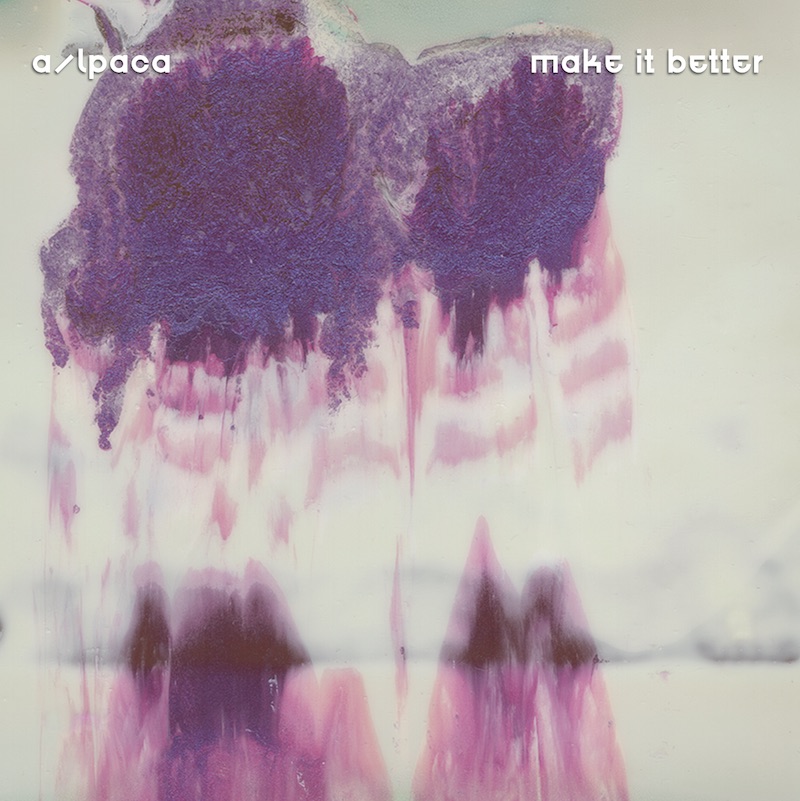 Today is the release-day of a/lpaca‘s debut album, ‘Make It Better‘ on Sulatron Records and WWNBB. The Quatuor from Mantova, Italy, released their first EP in September 2018 and a few tracks since then.

They synthesize a high-powered obsessional lo-fi space-rock through a clever collage of influences from different decades. With steady foundations hailing from the late 60s psychedelia to 70s acid space-rock, and unfaltering krautrock, they also indulge copiously in punk and post-punk energy, as well as modern psych-garage-punk atmospheres.

It’s quite a crazy mix, resulting in a brilliant and highly addictive cocktail of sonic pernicious obsession.

This album is all about the beat, you can feel it in the music, but it’s everywhere. Make It Better is gravitating around that concept, the opening track (and first single released), Beat Club, sets the imaginary scenery, suggesting we’ll be in for a treat of dance, fun, and freedom, hopefully until the break of dawn. It’s quite simple and short, but damn efficient to introduce us to a/lpaca‘s universe, their relentless motorik-infused energy, phlegmatic compressed vocals, and spooky synth layers.

Then comes the title track, starting off a fuzzed-out riff, somehow halfway between Ruff Majik and Here Lies Man, repeated obsessively to captivate us. Once they got us on the hook, the song takes turns, between this and spacey sounds and thrusts, oscillating between catchiness and trippiness with the fuzz binding it all together.

The lyrics cover another meaning of the beat, and how it’s freeing the band, and us, from concerns and responsibilities. Here, the beat is a way out of the daily struggles, the routine, and all the expectations we can pressure ourselves with, always trying to Make It Better. This right here is the key to what I love about this album, and a/lpaca‘s vibe, it’s refreshingly fanatic, furiously bouncing, and can seem superficial at first, but it isn’t. The band takes advantage of the catchiness and compulsion of the music to carry a strong positive message. This is actually what we miss and definitely need these days, after a long year away from our cherished clubs, venues, and gigs, numbed out by the lifeless overall situation.

Inept takes off with a super groovy forward-driven bassline, joined shortly by the bewitching synth, giving the song a haunting numb feeling, despite the pulsating rhythm of it. They build-up steadily on that, the guitar breaking off mid-song in a pure garage style, soon caught up in a spacey tumult. Before getting too far, the initial beat comes back, only to drift again into space at the end of the song, in a very Syd Barrett way.

Hypnosis is one of the noisiest and most pushed to the extreme, sound-wise. Even the vocals are distorted beyond reason, thus giving a really intense feeling to this track. But it’s also standing pretty well by its name, with some repetitive breaks bringing the energy a bit down, to contrast with the other side of the coin. Though it is contrasting in a kind of harmonic way, the patterns remaining in the same vibe as the more oppressive parts, building up together towards a mindblowing overdose of spacey noise.

Slave Antenna Array brings back the club mood from earlier, with a throbbing beat and trance-inducing synth layers. The vocals are quite rebarbative here, stamping themselves in the back of your brain like a mantra. Just before the end, the tempo and noise boost to finish off in a raucous frenzy.

The vibe comes back to space on Chameleon, going full-speed in an ethereal thrust through ghostly asteroid fields. Even though the energy is still pulsating, this time the mix is kinda muffled, to numb us while they keep on going further with every second.

As the title suggests, I am Kevin Ayers is an hommage to The Soft Machine, and kicks off with a dynamic throbbing vibe, interrupted regularly by a mysterious pressing synth fog, which will take more and more room as the song develops, surrendering progressively to it.

Citadel is probably the track with the most frenetic tempo, recalling even more the Oh Sees or King Gizzard here. All musicians sound like they’re possessed by the beat that pushes them to their limits, in a glorious intoxicating fury.

With their last and longest track, Lokomotiv, a/lpaca surrender to the krautrock side of their blend, launched on a typical Motorik urge. Fitting its title, this is only the steam engine of the song, with various wagons coming after it, all carried away into space behind it. Those seven minutes could be summarized into experiments around this, the band sprinkling all their other insights into it, some of which already displayed in preceding tracks, but not only, opening a/lpaca‘s spectrum of possibilities for the future.

In the end, the band digs deep into the various forms a beat can take, and the meanings of that word. As mentioned in their promo sheet: “The use of the “beat” has characterized humans since the dawn and has spanned the centuries, changing shape but not substance.”

If you ask me, that can also characterize this album, drawing inspiration from beats of past decades, showing all the contrast in-between while binding them together, distilling the substance of it, pure energy.

The acid style predominant over the whole album must be a key feature to the band’s identity, given how much their video clips are overflowing with it, in a slightly different way for each of the two released so far.