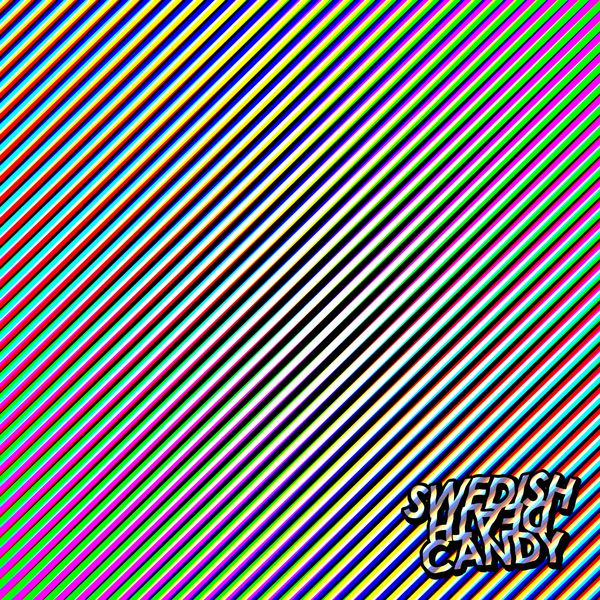 With Swedish Death Candy it’s like sweets. You have to like them, otherwise you are really, really weird. But first of all: I have to crash your dreams, sorry. Swedish Death Candy doesn’t hail from Sweden. The four members are singer Louis and Frank, both on guitar, Jiwoon’s on bass and Marco on drums. Jiwoon and Louis had been in some hardcore punk bands before. They met the others while studying in London.

How did I discover them? Well, that was pretty boring to be honest. I read about them in my favorite print-magazine. The guitarist wore a Lucifer Rising-shirt. This caught my attention from the beginning. They already released some singles (Won’t Be Long, Oh My and Broken Engrams) and the EP Liquorice. I couldn’t stop listening to those songs and was happy to find out they released their debut on Friday, the 17th of November. It was mixed by Tobin Jones (who did a great job!) and published by Creative Control.

[What is Lucifer Rising? That’s a trippy and occult art-movie from Kenneth Anger with tunes from Bobby Beausoleil, made in 1972. It is available for free on YouTube, only takes you about 30 minutes to watch and it’s absolutely worth it, although it’s a bit disturbing. I got a plan for you. Watch this beautiful film after you’ve finished this review and listened to the debut of this extra sweet band.]

You wanna know the recipe for Swedish Death Candy? Take how guitars sounded like back in the 60ies. We all love this, don’t we? Then infuse it with some nice Pink-Floyd-like synthesizer. And somehow make it appear like high-energy garage rock. There we go, this is basically the sound of Swedish Death Candy. You won’t get bored or tired while listening.

‘I can’t escape my last dream’ – oh yes. I can absolutely feel this. I tend to oversleep.. and most of the time I don’t really seem to properly wake up. What I want you to say: Guys, that’s the perfect opener for all daydreamers out there with the perfect balance of fuzz and calm, pure dopeness. In addition they released a music-video you will probably like as much as I do.

Broken Engrams. I listened to this song before the whole album was dropped out. And I wondered: what the hell would an engram be? Some machines aliens lost on earth? Of course I knew it was not and looked it up. It’s a memory trace. Electric visions filled my mind. When you think the song is over, an extra heavy part starts and leads to a spaced out guitar-solo. This is so doom, I love it, you love it, everybody should love it. Or you’re weird and don’t like candy.

Love you already: Probably one of the nicest declaration of love. What I really like about this tune are the several voices, they chime together perfectly. At the end the tempo speeds up.

Avalanche – came to melt your brain. This song (especially the vocals) reminded me a lot of Comet Control and my last year’s favorite record, Center of the Maze. The band takes a lot of inspiration from electronic music as you can see at the outset of the song. Those electronic synthesizer tunes pull through the whole song. The climax of the song is the super spaced out refrain.

When all is gone: this is my second-favorite track of the album. It brings you back down to earth after the spacerock-trip of Avalanche. Let the lyrics speak: ‘Your smile tears me apart. Wanna run away with you.’

Living your life away. This song starts pretty cool. Anyway and the next song even surprises you more and sounds better. If killing’s what you love.

Pearl – there is the spaced out high-energy rock in its perfection. Tempo-changes, synthesizers on fleek and the voice fits flawlessly. Describing it is difficult.. imagine a pretty blurry picture, that’s how the vocals sound like.

Liquorice: The beginning and refrain sounds like a background-sound for a blunt tv-show for children lol. And now I really don’t want to be evil or something – I love Swedish Death Candy, otherwise I would not have written this review. But I really dislike the characteristic stonerrock-riff in the refrain. Sorry, it’s just nothing special. On the whole the song is not bad at all. The second part is really spaced out, heavy and innovative and rounds up the album well.