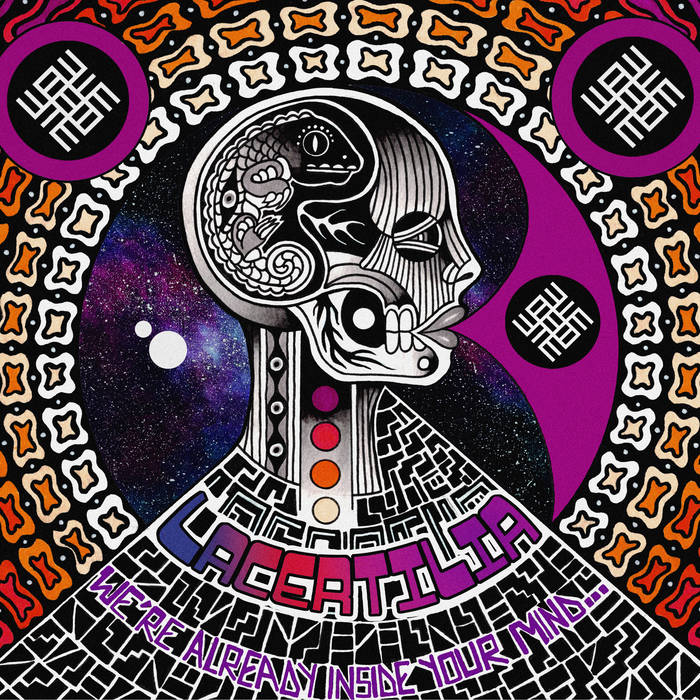 To sum it up, Lacertilia is a not-so brand new band from Cardiff, UK. The band as been founded over the ashes of The Witches Drum, which split up in 2014. They already released a debut EP last year (reviewed here by Mr. Fuzz), which was very deeply into « classic » desert rock but had already a primal feel that distinguished the band. One year and a half later, here we are with a full-length album.

These guys surely have been to desert rock school, but we feel some other influences coming from punk-rock, old-school doom, and Hawkwind for sure. We’re pretty close to what the Witches Drum did in the past. The overall songwriting is top-notch, and the interpretation follows, with a special mention for the singer, Matt Fry, who drives the band a thousand miles an hour in the different ways they go. The songs are very different to one another, and the album explores a whole bunch of sensations, from anger to bliss through resignation and madness.

Indeed, the album moves back and forth, both yells and murmurs. For the length of a song, I’m a shaman, the next one I’m a crazy hooligan in a crowded live house. There is this constant idea of recovery through primal fury and destruction, of oneself or another.

The guys manage to create something fresh, mixing stoner psychedelia with rock n’roll juice and fun. It’s complete. Heavy, but smooth. Groovy, but bursting. Also, we can feel something negative molded to create uplifting moments. This matches the idea behind the album, which appears to me as what comes through destruction and reconstruction. It seems that the Cardiffians decided to have fun, to mock and to take revenge on what hurt them. They also wanted to relate how they overcome all this, through both texts and music, using this as an outlet. And… Honestly, that’s pretty fucking interesting, and that makes something personal relatable to most of us. I’m sure we can all think of something that way. Hence the title. Quite clever, guys.

Actually, this title made me afraid at first. « We’re already inside your mind », sounded quite cheesy to me and I feared the album followed. That wasn’t the case. At all. It’s an unstopped, smooth, eruption of lava. And it all makes sense.

One year ago they had already created what could have been a coherent album, but now they got much more personality as a band. And here they are, at the 8th place of the doom charts, quite huge for a first album. What more can I say ?

Though I can point some mistakes in the production, some moments are a bit confuse, some others lack attack and feel a little too mellow. But here I’m just playing the bastard looking for the tiniest details. I’m sure you’ll hear what you want to hear. I’m really looking forward to seeing them live as well, as I think that’s much more of their territory than the studio.

I guess this is just a starting point to evolve from for this band, and it’s already very good from my point of view.

In a livehouse. In a party. Everywhere hot and crowded. Or at home if you’re shy.

The graphics (by Ozzy Osmond) are great and match perfectly the album.  Great job !