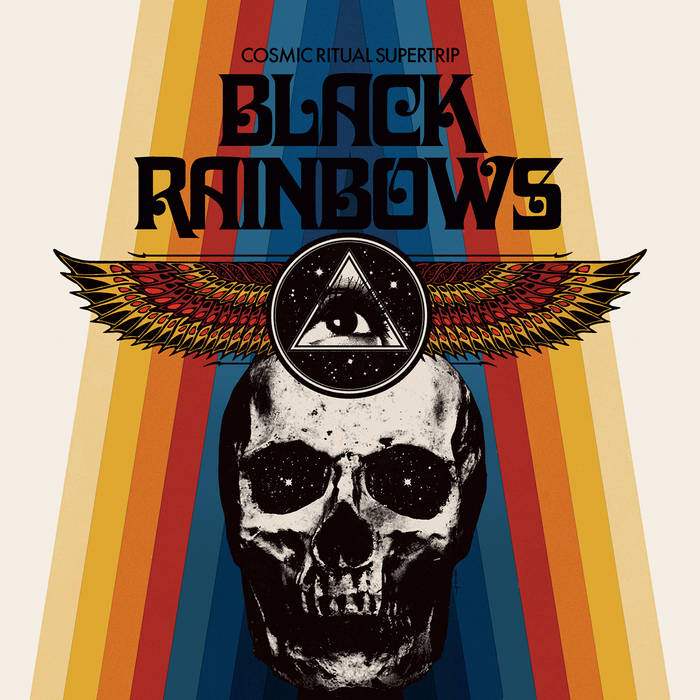 Time to kick the jams Fuzzers! Black Rainbows from Italy have refined their brand of Stoner/Psych groove meets 70’s Hard Rock since their debut record dropped in 2007.
Early on they seemed to know what sound they wanted and since then been a consistent force to be reckoned with.
They’ve gotten more intense throughout the years but never at a loss of grooviness and occasionally they treat us with amazing tracks were they slow down the pace in favor of longer space trips full of atmosphere, most notably Golden Widow from Stellar Prophecy and Hawkdope from Hawkdope.

The sole original member left and riffmachine Gabriele Fiori knows what the band does best at this point.
So just like Motörhead and AC/DC you know what you gonna get and it will get your head banging!

Strap on your traveling boots, it’s time to Rock Out!

A quick look and we’ll see that there aren’t any songs over 6 minutes so gone are the longer spaced out songs this time and the closest we get is the amazing “Hypnotized By The Solenoid”.
A spacey mid tempo groove which end with a classic drawn out Black Rainbows guitar solo.
Instead the focus this time is mainly on 3 to 5 minute fuzzy rockers to get psyched to.
Certainly Cosmic Ritual Supertrip doesn’t lack riffs and melodies which make you headbang but we all knew that already.
It’s bloody Black Rainbows we’re talking about!

And they go straight into that on the first track “At Midnight You Cry” before taking down the pace to almost doomy riffage in “Universal Phase”.
With the help of soundclips you get vibes of a jet fighter pilot having extraterrestrial encounters.
“Radio 666” and “Master Rocket Power Blast” are the tracks you would press full throttle when driving.
First one gives of a Monster Magnet vibe and a guitar solo straight outa Motörhead.

One of my favorites is “Isolation”, grooviest of the bunch and no surprise lyrics fitting of the times.

I miss the slow, long & spacier tracks though which spice things up with more variation but one shouldn’t complain about such a minor thing as they did think of it and put the semi-acoustic track “The Great Design” right in the middle to give you a short break to relax.
Also the bonus track “Searching for Satellites Part I & II” follows the same path and sounds like something from Gabriele’s The Pilgrim album from last year.
I can always go back to past albums if I want those long Black Rainbows tracks. 🙂

The production & mix sounds great with a nice fuzzy tone and a stellar performance on drums by Alberto Croce who gives an extra punch to the grooviness.
My only complaint is the bass guitar being buried a bit in the mix, It’s nothing I think of most of the time.
But it dawns on me when hearing the eastern sounding first half of “Glittereyzed” where the bass is really noticeable, a track which end with killer riffage that easily could have kept going for a minute or two without suffer from it.

Glittereyzed, Isolation, Hypnotized By The Solenoid