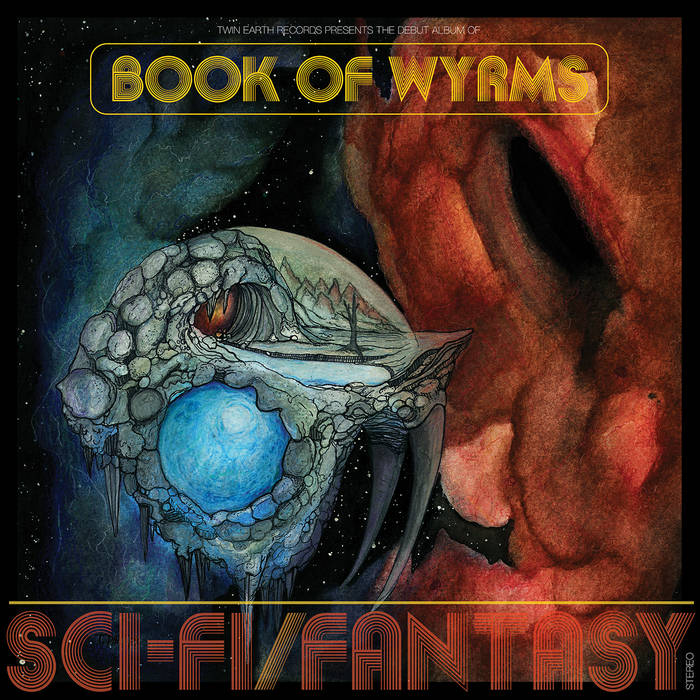 An occult oriented manifestation of an angelical voice before a distorted chroma key...

Book of Wyrms is a band from Richmond – USA, that features a great female singer, heavy guitar tones and a bucket of nice surprises for the fuzzy listeners. This is the first release from this space stoner/doom band with a weird name, and they started their journey with the right foot!

What we hear as we press play is a heavy guitar tone, often overlapped with twin harmonies, gracefully soothed by a hazy voice of a female angel, and if you look carefully, she has her fingernails painted purple. See? Hazy… Purple… HA! GOTCHA!

Even though the band sounds more metal oriented, their music show some solid influences of space rock, so, you could use the name of the album in the genre field. It works too! Even though the heavy tones are there, the first impression that you get from the album is that you’re going to listen to a “Purson” clone or something like that. Well, it does sound alike, and it looks predictable from the first minute (mainly after the second song), but hang tight: their music is full of surprises. The album kicks off with simpler songs and cool harmonies that are easily understandable and very straightforward. However, as soon as “Cosmic Filth” starts, you feel that the pace is increasing and the temperature is getting a little bit hotter, but the psychedelic mood is still there, as for the rhythmic sessions that are occasionally interrupted by some trippy purple keys.

It starts to get really fun after the song “Nightbong“. This funny song name comes with some original riffage, and odd time signatures, unlike the very common 4×4 linear beats found on most of the rock bands around. If you’re doing something else while this song starts, it will automatically draw your attention to it just like a magnet. “Nightbong” also features a passage where the singer Sarah Lindsey performs series of harmonised vocalisations. This clearly shows how soft and tuned her throat really is.

The song “All Hallow’s Eve” really stands out a lot. Certainly, that song hooked me up with the band. It starts creating an ambience that slowly builds, builds, builds, and when you get back to yourself, you realise that you are in a trip with slow riffs and fast guitar picking surfing on reverb wave. Perhaps the most post-rock spot of the album: they embellish the tune with extra details and decorative audio features. This song also present some dark stains, somewhat kindred to their occult influences. If you’re listening to the song now, stop the review and pay attention to the progress bar/clock. Shhh. There is a surprise at the ending 🙂

It’s time for the the last two efforts: “Transcendental Migraine” and “Sourwolf”. Both are great songs that wrap up the album, just like a tasty sandwich with a soft bread on both ends, a nice minced beef stuffing, with ground black peppers and salads inside. Stop and behold the metaphor!

Pay attention to the way that the band mixes space/stoner/doom in a single package. Their ability to please our ears in a smooth way is remarkable!