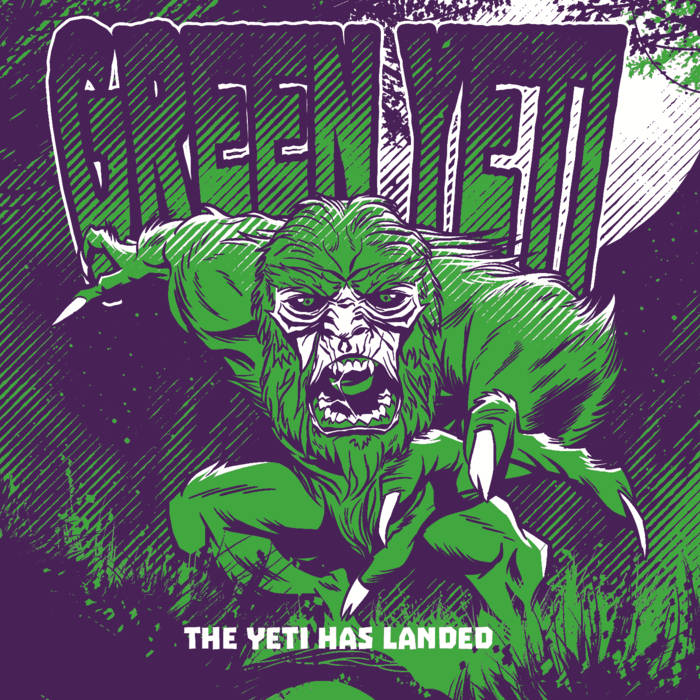 Fresh Stoner Doomed Psychedelic Rock that will Blow your Mind !

Review by a new contributor, please welcome Clara alias Mrs. Dopey from Germany in the team

The promising power-trio from Athens formed in 2014. After supporting  bands like Amniac, Mock The Mankind, Dopelord, Stoned Jesus and The Re-Stoned, Green Yeti finally released their first album on February 19, 2016. This piece of heavy grooves is called ‘The Yeti Has Landed’ and was recorded entirely by themselves. By the way, Green Yeti is announced to be the supporting act for the band Egypt.

Green fucking Yeti is a hazy, huge, swampy mass, which will take you far away. Where did the Yeti come from? Was it another galaxy? From the Weedians Planet? From another eternity? Hell? The Bermuda Triangle? Probably we will never know… Besides, while listening to this album, it feels like you’re levitating in a fourth dimension where time plays no role.

Whatever! I will try my best to describe their sound, which is a tricky issue, because they brilliantly combine Stoner Rock, Doom Metal, and Psychedelic Rock.

Even though it’s a 4-track album, it will take you 62 minutes to listen to it. That’s because the tracks are 9-19 minutes long. You can definitely notice the heavy influence of Doom here

Hallucinations are natural side-effects you shouldn’t worry about. The album starts with a short intro made up of a failed phone call and synthesizer tones you automatically connect with the outer space and aliens.
After that the title track strikes in with a heavy, thick and slow riff for over three minutes that leads to a singing part. The howling Stoned Jesus-like voice is monotone and sings in the same rhythm again and again. Don’t get me wrong! It’s that special, nice kind of pattern that is internalized like a mantra and leaves a gentle and warm feeling. It deals with yetis, the outer space, getting stoned, death and the lord.

The heavy, fuzzy compilations are detached with smooth, laid-back Psychedelic breaks, where the bass and drums are simply stunning and the guitar plays flying, whaling and screaming riffs. I won’t go into detail. But I can say that Psychedelic Stoner Rock meets heavy Doom elements and forms a unique sound. It sounds both lightly and really slow and evil. The awesome bass is groovy and rough, the drums boomy and dark. Both of them are heavy as hell.

After listening to the album, a power overcomes you and you are forced to listen to the whole thing again. And again. And again… At least this is what happened to me. And after this process you feel like you did nothing but smoke… no cigarettes

You belong to those who dive into music waves and enjoy going with the flow? – You will like this album.

And – hell yeah! Don’t overthink why the yeti is green and why musicians from hot Greece brought him into being and go listening to them!

On a lazy hangover Sunday you just decided to stay in bed. It’s 4:20? That’s also a good time for some Green Yeti!