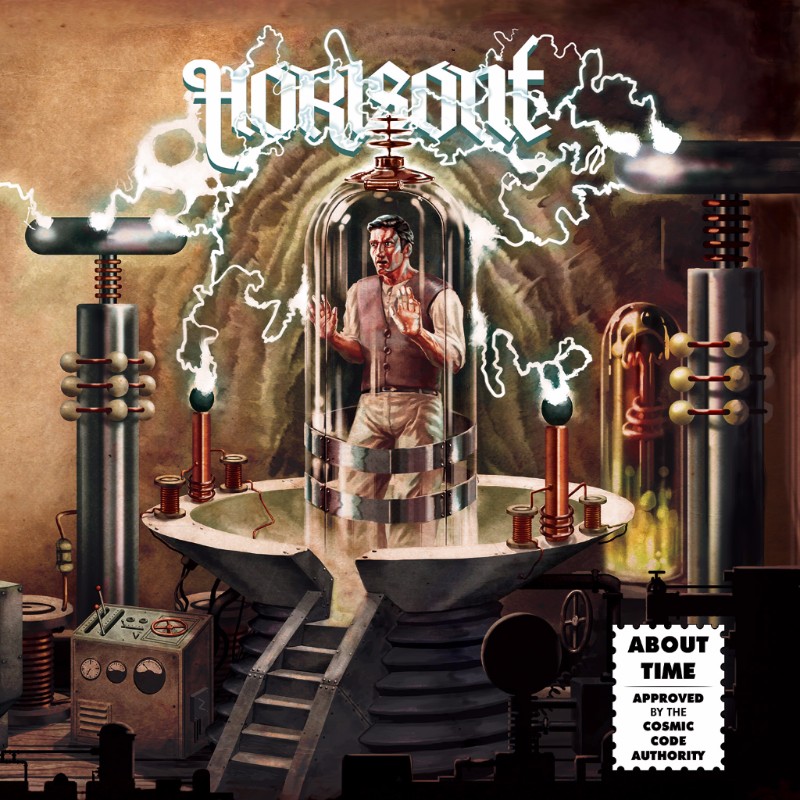 It's About Time to blend classic sounds into one album !

Swedish retro rockers Horisont are back with their 5th album About Time serving a classic rock/metalish sound with a hint of psychedelic lime. There is a lot of groove and a lot of throwback on About Time, so sit back and enjoy the ride.

When somebody says classic rock there are a ton of bands that come to mind and it becomes unclear as to what the person meant when he said classic rock. Is it classic rock in the vein of The Doors? Black Sabbath? King Crimson? Deep Purple? What if I told you that About Time is a mix of all of the above? There’s the fast and groovy riffage of Deep Purple and Black Sabbath, the quirky time signatures and displays of technical ability of King Crimson, and the peaks of atmospheric psychedelia of The Doors. To break it down, we’ll look specifically at “Without Warning”. This is one of my favorite songs on About Time mainly because of the triplet grooves that dominate this track. I love triplets, but especially in this context because it gives a more bluesy sound, but keeps things at a nice speed. It also paves way for slick licks and brief bridges in between verses and measures. “Without Warning” is very reminiscent of Deep Purple and Black Sabbath because of the speed and solo. The solo has a lot of hard rock soul put into it and branches off like Black Sabbath songs do, but in the style of Deep Purple. It’s really quite a unique blend and I rather enjoy it.

“Point of Return” is the song to listen to if you want to hear the most King Crimson influence. The shifts in the music and drumming are what give it away the most. King Crimson had a lot of impressive moments for every instrument involved, but the drumming stood out a lot because of the use of cymbals and even the speed. The same thing applies here. The drums serve as markers for changes in the song. It will go from relaxing and slow to hyped up and sound like it’s narrating an epic tale. Needless to say, “Point of Return” is a story in itself.

The guitar tone is tricky to pinpoint for me because it does not have a distinct or definite sound to relate it to. It isn’t fuzzy at all, nor is it fat or thick. The guitars aren’t clean, that’s for sure, but they aren’t necessarily dirty either. You can hear a slight overdrive and that’s mostly when anything is being played on the higher strings. It’s strange how the guitars don’t sound very overdriven when lower chords or even chugs are played, but it isn’t bad at all. The tone is clear and it allows the bass to breathe easier in the mix.

“Hungry Love” is a really fun song because it goes way out there for about a minute after you think the song was set in its ways. Horisont has a habit of starting songs and taking them into a much different direction. “Hungry Love” sounds like it will be like a classic rock kind of ballad until it takes you to outer space, complete with laser-like sounds and a phaser! There isn’t much to say about that, I just think it’s a super fun song because of that little twist. “Dark Sides” is similar to “Hungry Love” in the same respect except “Dark Sides” gives much more of an adrenaline rush than “Hungry Love” does because “Hungry Love” constantly switches between calm and not calm. “Dark Sides” pumps you up and keeps you there for the remainder of the song.

About Time is a fun album for sure. It has the right amount of chill, has heat, and has the riffs. The riffs are not the showcase of About Time, but they do the job in spurring other parts of each song and carry rhythms well. I would say the drumming, solos, and individual brief licks are the highlights of the album. This is the kind of album I would throw on if I want to hear solid guitar work and still have something I can bob my head to while I complete a task or something. That is NOT to say this album is background kind of music because it is not background music at all. I like to listen to certain music while I do certain things, so perhaps this is just a personal preference to play this while doing something else. However, I do not think this is the kind of album you want to dedicate specific time to listen and analyse every detail of the album and only listen to that album. About Time has a lot of great things about it and it is an enjoyable album. I would have preferred the guitar tone to be a little more overdriven during verses because it would have allowed the songs to have a deeper bite while still allowing the bass and drums to do their business. Either way, About Time is worth a listen.