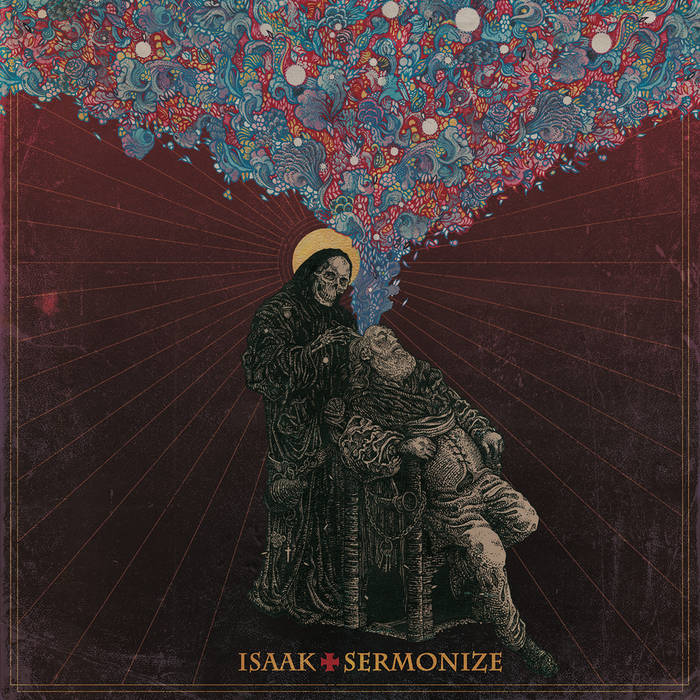 A Bag of Riffs For The Fuzz Man !

Much like Greece, Italy is one of those countries I’ve been particularly impressed with for some years now regarding their love for everything fuzzy and the fair amount of good bands they continually produce.

It’s the case of Genovese Stoner Metal fuzzers Isaak, formerly Ghandi’s Gun, that have been winning hearts and minds since 2010 and made themselves known with a slew of concerts alongside some big names like Los Natas, Clutch, Acid Kings, Atomic Bitchwax; and especially their 2013 effort The Longer The Beard The Harder The Sound.

Their last effort, Sermonize, aims to capitalize on this promising trajectory and propel them forward.

The Peak and Fountainhead are solid, straightforward rockers that introduce the album before going into a practically instrumental track like Almonds and Glasses, with a very interesting riff that is carried throughout the song with different variations.

Soar, a powerful, 5-minute track gives then way to another straightforward rocker in Showdown, and after the 2-second “Kyuss Cover” Yeah, we get another cover in Lucifer’s Road, with a riffage that feels straight from 1995. Lesson N.1 is probably the most Stoner Rock track of all, with a tonality and handling of riffs that sounds very classical, quite Los Natas at the start, though it doesn’t carry.

Sermonize is a genre album, and that’s the best way to go about it, I think. The musicianship is solid, the riffs are good, the vocals survive despite the production, and drums and bass are competent. Save for some improbable drum rolls, Isaak’s skill is not in question. My main gripe with it is that I feel it lacks spirit. Oftentimes it sounds a little bit samey, even when the actual notes and music shouldn’t be.

Sermonize’s production does the music no favors, and I’m convinced that the lack of spirit I felt and my inability to connect with the music stem from that. I cannot know if Vinyl or CD sound different or better in any way, but accustomed to enjoying high dynamic ranges on my audiophile headphones, Sermonize felt muffled, tamed. While the stylistic choice made with Boeddu’s vocals is a choice I don’t particularly like, but also don’t hate – and reminds me of the also strange choice for John Garcia’s solo debut -, the overall sound of this album feels to me like the master’s been brought down a notch trying to match all tracks at the same level.

For all that Isaak tries to bring musically to the table, I haven’t been rocked. I wanted to be, especially with tracks like Fountainhead, Lesson N.1, Lucifer’s Road, or the nice change of pace that Sermonize’s last track, Sermonize, embodies.

Commuting would be a safe bet.

I would like to emphasize that Isaak’s Sermonize is a good, solid album. I wasn’t able to connect with it and the production prevented me to enjoying it fully. However,  your opinion may differ, and fans of everything fuzz should find plenty of good things in this album to enjoy it amply.