Dopelord – Children Of The Haze Review 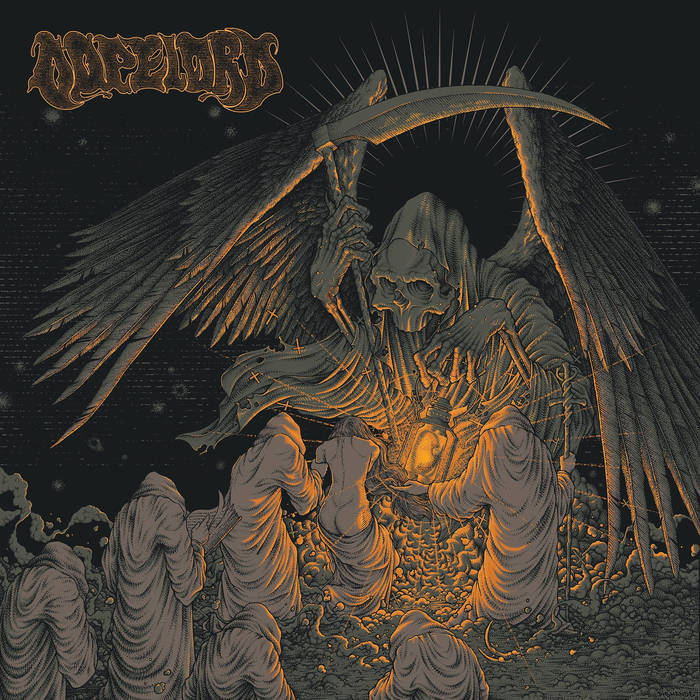 Acid fuzz, psychedelic vocals, heavy bass lines, straight up drum work, some new elements and ideas, put that all into the mixer and there you go: The new Dopelord album.

This is the third and newest album from the polish fuzzy fellas of Dopelord. It starts with a light fuzzy guitar, with almost no gain, and it remains that way through the whole album. The end.

Did you believe what you read? HAHA! Who am I kidding, right? This is Dopelord. These initial 40 seconds is pretty much the maximum amount of clock chunk they’re able to withstand without a heavy and swollen-fat fuzz. Right after the intro, chaos starts to take place here. As the guitar hacksaw spoils the mechanics in your ears, the vocals step in with a psychedelic aura, though, the final output for the voices is more defined than the previous works, enabling the listener to understand the lyrics without too much effort.

The fuzz tone is acid and totally in your face, as also seen the fuzzy spots of the last Weedpecker album (II) that also carries in some pretty bright colors on their fuzz. PS: I want to know what kind of fuzz pedals they’re breeding in Poland. This stuff is insane.

The instrumental parts and the execution performance are both amazing in this album. Even though the first three songs are composed in a regular Dopelord formula, there are some details that stand out, like the tom-tom frenzy and the guitar FX (usually panned to the right). Most of the solos are very spacy and psyched out on legatos in conjunction with some other guitar effects filled with reverb and some tape delay effects.

Already by the mark of the second song, the album takes a different, unexpected detour. In this song called “Scum Priest“, we notice something not very usual to Dopelord: Harsh vocals. They provide a sludgy atmosphere, along with the very heavy oppressive, drawn-out, acid riffage. Dopelord also teaches you how to perform breakdowns without being poppy or pretentious. Albeit this song has been written with another pen, the blueprint works perfectly, and it suits in tightly with the whole combo of the background instrumental of the song (which isn’t too much affected by this new element, but if briefly demonstrates the band’s ability to innovate).

The adiposity of the sound waves in this album rarely leaves the sound boxes. The speakers ooze a viscous and oily liquid, which you should not tamper with. If you drink a sip of that you’re bound to die with your arteries clogged up, and a heart attack will follow yet before the end of the album.

The temperature of the album gets colder and its pace slows down a bit after the third song. “Skulls and Candles” has the first melodic scales of the album, but by melodic it doesn’t necessarily mean that it’s not heavy. The fuzz still acts like a contention box, that shields the mud in, never letting the greasy fat leave the environment.

“Dead Inside” is definitely my favourite song of this album. Initially sludgy, with a 7/8 signature and a very, very sticky melody that resembles some early Pallbearer song. Then it seems that they inserted the whole band into the oven, and the heat starts to build up in the album. There are many of vocal lines that showcase note progressions using 4ths and 6ths, creating a very stoner-like, Acid King acclimatised approach to the atmosphere.

The 6th and last song, “Reptile Sun“, has a very upward mood, and makes good use of the mind-sticky chorus technique. The ending product is delivered as a straight forward composition, very witty and pithy, burning the candle at both ends. These characteristics make this last effort look more like a bonus track than a regular song. This is the only song that portrays this behaviour, raising it to a more general accessible level. Listening to it makes their intentions about this song pretty obvious.

Even though there are lots of new elements in this new album throughout its course of listening, the atmosphere still remains steady with flawless integrity in the high-temperature songs, and very fitted to the proposal as in for the stoner/doom mood of the slower songs, mainly the first 3 tracks. Roughly, in comparison to the previous works, this album is a bit more doom oriented. The band seems to have finally reached the perfect balance between the main genres that compose their style of composition and execution.