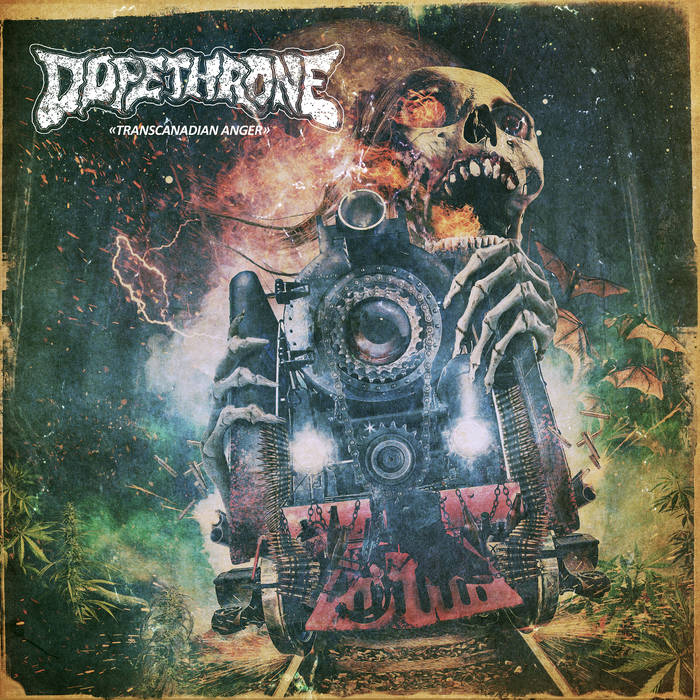 Be ready to get your filthy Slutch on!

Dopethrone from Montréal, Canada are back! Last album Hochelaga came out 2015 so I feel it was about damn time. 😉

With a name taken from the Electric Wizard classic and vocals similar to Dixie from Weedeater, you can guess what kind of stoner/doom/sludge sound is going to please your eardrums.

So if you want your fuzz heavy as a dirty juggernaut filled with booze and drugs then look no further than the nasty Dopethrone!

If unfamiliar with Dopethrone you could guess it would be just another Electric Wizard sounding band.
Some parts are reminiscent of EW but Black Sabbath riffs shine through far more, and overall there’s a Sludgy doom punching you in the face!
I would say Weedeater is the closest to compare the sound with but WAY filthier, imagine Weedeater being a bag of weed then Dopethrone is like a mixed bag of all the hard drugs on the market. ^^

What I love about Transcanadian Anger though is that every song stands out, there’s a couple of different tempos to mix things up and they’re all united by the sheer quality of songwriting and heaviness.
Here you get heavy doom rockers like “Killdozer” and “Tweak Jabber” which gets your blood pumping and are perfect songs for the party.
And for you stoners out there just put on “Kingbilly Kush”, sounding like a crossbreed between Weedeater and Black Sabbath it will be perfect for you.

Dopethrone did not forget to make some ultra heavy tracks for us on this album, “Snort Dagger” is a slow piece about not being able to find good coke and you should check out their video cause it’s hilarious! 😀
And the heaviest of the bunch is the last track “Miserabilist!” Perfectly combining Sludge & Doom in the heaviest of ways and guest singer Julie is so freakin’ awesome.
I’m not familiar with who Julie is, only know he/she sang on “Zombi Powder” from their album Dark Foil but the vocals are mean as hell. 😀

All in all, I honestly got nothing bad to say about this album, the other songs not mentioned are equally awesome and Transcanadian Anger will surely be on my Top 2018 list.
Be sure to check out the official video for Killdozer as well!