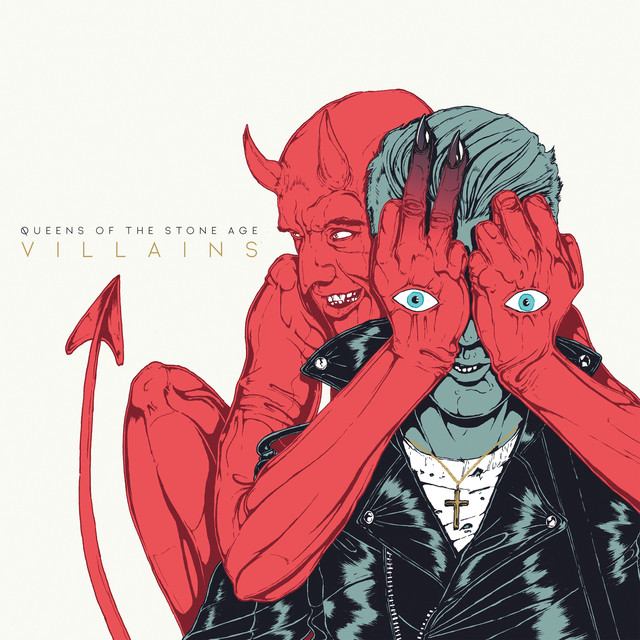 Josh Homme stirs the QOTSA ship in a direction that will alienate many, in a tribute to Iggy, Bowie and Funk Rock!

Josh Homme is not trying to save Rock ‘n’ Roll. He just wants not to be stuck in his previous glory days (“Like A Clockwork” is one of the best 2013’s releases) and also wants pretty bad to make you dance. No more darkness, no more political shit to agonize you. So he recruited Mark Ronson (known for producing Paul McCartney, Adele, Bruno Mars, Amy Winehouse) and created an album where his “Era Vulgaris” stuff mixed with his stuff from all of his other projects (EODM,TCV,Iggy Pop colaboration, etc) met, with an uplifting result.

The aesthetically dark “Like Clockwork” with its rich sound is in the past. The future is whatever the main man of Queens Of The Stone Age wants. And he wants – in a similar fashion to his idols (Iggy Pop, David Bowie) – to commence solely the band’s new groove along with his troopers Troy, Dean, Michael and Jon. So the sound is more beat driven and multi layered with 80’s new wave synths, string instruments and a straight and “dry” guitar sound.

Let’s see track by track how it goes: “Feet Don’t Fail Me” (as the title suggests) is the opener and as any band that respects itself it is a blatant statement but in this case, it is a statement from Josh. He is here, he takes matters in his own hand and stirs the QOTSA ship unapologetically wherever the hell he wants to. The start of “Feet Don’t Fail Me” reminds me of 80s soundtracks where synth was fused with classical music orchestration. I could rave about the intro of the song for many lines, but then one of the best Queens Of The Stone Age riffs hits me hard! The song it is interlarded with synths in the background while Josh’s voice has this typical cocky singing. Definitely the best moment of the album.

The second song and first single and video of the record is a full straight on funk rock song where the scale weights more on the Mark Ronson’s other works and less on the band’s. At first, it seemed generic but in the general flow of the album is less odd. The bass driven “Domesticated Animals” is if the “Era Vulgaris” material went in a new wave direction, except the last part where the string instruments act like a prelude for the next song. I think that the whole new approach of this record is better revealed in brighter colors in tracks like “Fortress”. A melancholic ballad, full of new wave synths and beautifully layered vocals and a basic guitar riff. The outcome feels easy and sometimes being simple says more.

Midway through the album, the funk and new wave elements give their place to surf and rockabilly boogie! “Head Like A Haunted House” also has the eerie keys underneath the crazy beat and reminds a lot of Dead Kennedys stuff. “Un-Reborn Again” is one big great tribute to David Bowie. The recipe of synths and beat – driven structure seems to pay off here more than in the previous songs. Repeating rhythms, and a natural flow in terms of songwriting where everything falls into place. In the final minutes where all the instruments fade in and out (along with one more presence of string instruments and glorious sax) the vocal melodies harmonize in a beautiful way that reminds lullabies.  “Hideaway” is in the same vein as the previous song with all its sexy groove but I think it would be better as a bonus track since it has many similarities with the previous song.

Before closing the LP with a melancholic and gradually epic song (“Villains Of Circumstances“), “The Evil Has Landed” is the second single and along with the first song, one of the best moments of the album as well. Edgy guitars that remind us the older Queens Of The Stone Age, rich melodies and a frenetic ending reminiscent of Iggy’s high energy rock n roll! Robot-dance rock at its best!

This effort should feel natural despite the fact that it doesn’t feel quite solid (for example some tracks will not stand the test of time as others). In 2013 he was part of Arctic Monkey’s “AM” successful album. Then he went to create one of the best modern releases of Iggy Pop’s career. This experience also is present in “Villains”, which reminds Iggy’s early 80s solo stuff as well as the “Berlin” era of David Bowie. He also played along Dave Grohl and John Paul Jones in Them Crooked Vultures, where their eponymous LP has many sonic similarities to “Villains”. One other factor that I think he made him to light things up and have fun was the tragic experience of his other band Eagles Of Death Metal. We also shouldn’t forget that he was a teenager back in the 80s and besides rocking out in the desert listening to Black Flag, he also experienced the rise of synth and new wave rock, so 30 years later it’s clear why he incorporates them in his ever growing sonic palate.

Mark Ronson is no stranger to the QOTSA territory. He covered “No One Knows” for his personal EP, and also covered this. He also produced Lady Gaga’s latest LP, where Josh wrote, produced and played in a few tracks!

Queens Of The Stone Age Links