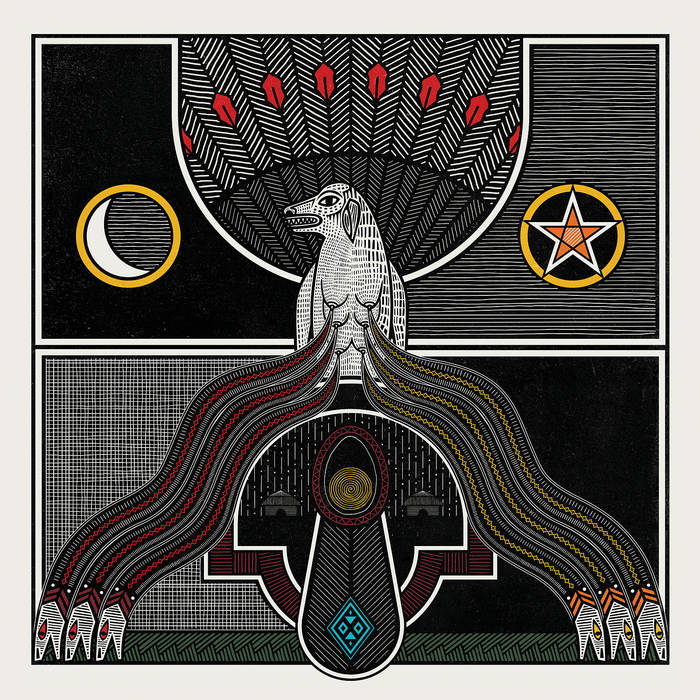 Enter the Fuzzadelic Spaghetti Western Soundtrack of Your Next Peyote Trip !

This band is refreshing. Equipped with tons of percussion, a bass drum, a couple guitars, bass, synthesizers and voice. They dip into tribal, folky, funky, experimental latin jams; dosed with primitive vocals. Somewhat nestled in the steep of an awakened consciousness, with conviction, they’re re-connecting us to a spiritual realm.

They play music as if they’re out for blood. These pack of wolves have an ability to prey on emotions. Listen closely, you can hear the footsteps; the heartbeat. This album is so much fun! It’s alive.

Do you remember the scene in Oliver Stone’s The Doors when Jim Morrison (Val Kilmer) guides the band through a peyote vision quest in the desert? While they ride the snake? I know it’s hard to imagine removing the song “The End” from your mind or even the circle chant of “My Wild Love” during this scene, but if we could replace it somehow. Familia De Lobos reminds me of that scene. Or at least if Oliver Stone Quentin Tarantino decided to make a spaghetti western film about Familia De Lobos tripping balls in the desert, he’d most likely include their self-titled album as the soundtrack.

Let go. Consume peyote. Enter the desert in a moonlit pitch. Wake up! “Todo Lo Que Brilla” opens the album, and clearly Familia De Lobos are channelling the ancients. All that glitters in this song begin from the center of their spirit. A very hypnotic Lo-fi tribal rhythm sets the tone, and continues throughout the rest of the album.

Now, sit around the fire. Feel the breeze at your back. “El Viento Y La Luz” becomes the eyes for your vision. Slow, and groovy beats will move the song around your bobbing head. Next, “Sangria” connects the tribe. The justice and lenity of approach in this song. Cosmic synths, beautiful guitars; It’s a slithering serpent sound, filled with voices all around.

Familia De Lobos performs a heartsome cover of “My Wild Love” by The Doors. — “Mi Amor Salvaje” begins with what sounds like a crackling fire. This song crushes. Filled with lush ambient elements of ceremonial musical structure. They’ve embodied the essence of Jim Morrison’s poetic quest for mother earth’s heartbeat. Eric Moreno (guitar and voice) the silver-tongued orator, does his best to honour Jim, while instilling his own magical richness.

Following the wonderful rendition of “My Wild Love”, then absorbed in the silence between songs, the album transitions into an instrumental piece: “Familia De Lobos (Preludio)”. A prelude, which builds into what feels like mastery of the desert, thrusting us into “Conquista Del Desierto (Canto De Precipicio)”. Big tender percussion beats sink into a state of reverie that manipulates trance induced notes. Dark demonic smoke rising in slow-motion sounds. “Familia De Lobos” closes out the album.

The family of wolves move through their self-titled recording like an antiquities river, which meanders through their network of narrow canyons. This album is rich with historical psychedelic rhythm, tribal musical structure, and it can become the cult of personality as a soundtrack for any modern western.

It is a limited edition of only 300 LPs pressed on snow white vinyl in a 350gsm reverse board printed outer sleeve. Riot Season have 180 of these in total. Available to pre-order now as either a stand-alone LP or with a bonus promo CD copy.