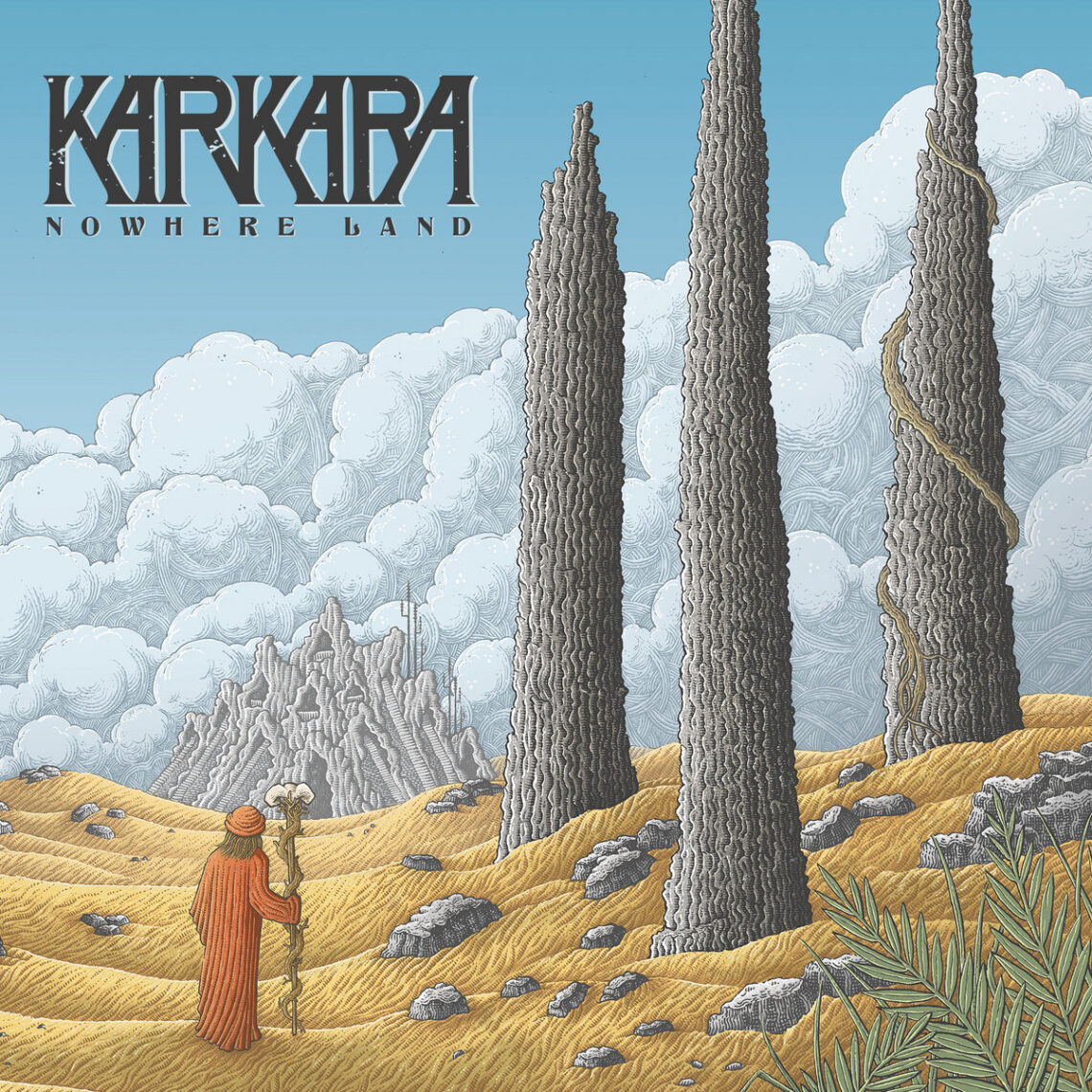 A journey onto strange, distant lands

Back in October 2019, when things were still pretty “normal”, I stumbled by chance onto Karkara’s first album, Crystal Gazer, and fell instantaneously in love. The suave melange between kraut rhythmics, eastern sonorities, and the overall psych-induced garage fuzz resonated with my soul, and it became one of my favorite albums of the year. Now the French trio is back with their second album, Nowhere Land, out November 13th on Stolen Body Records, and they’ve agreed to share with us a bit of their magic. Time for an interview with Karim, guitarist, and singer.

-The band was formed in 2017, can you tell us a bit more about you, how you met, how you defined your sound?

It all started on the college lawn here in Toulouse where I (Karim) met Hugo. I had my acoustic guitar and him, his acoustic bass. We jammed for a bit and we made it a weekly RDV every Thursday on that same spot on the lawn. At some point, we started thinking about forming a band with some other musician friends. It was a bluesy/funky band called Halazoun. It was a really fun experience and we made a few gigs in town. At some point, members left town so the band split but Hugo and I decided to continue the journey. The funk/blues experience was really cool but we wanted to explore something more visceral, raw, and psychedelic as we always liked that kind of music. We made a post on a music forum saying that we’re looking for a drummer and after a few weeks we found Maxime. The principle was the same: Let’s jam and see what happens. That’s how KARKARA started.

-Two albums in 2 years, was this already planned when you released Crystal Gazer? If not, did you use the time given by the confinement and most shows being canceled to record faster than anticipated?

When we write new songs we always have that euphoria and excitement doing it. That joy of creation when we play something new and we look at each other saying that it was fucking cool and intense. So we are constantly chasing that feeling song after song and when Crystal Gazer was released we had already started writing songs for the next album. We didn’t know it was going to take only a few months before finishing it, but it was obvious for us that a second album would be out soon. Crystal Gazer was released in October and in February we were already in the studio recording Nowhere Land so everything was ready even before the Covid storm came.

-How did you record this new album? Was the process different from Crystal Gazer?

The two albums were recorded the same way on analog tapes here in Toulouse. We have an amazing studio called Swamp Land and it is a great opportunity for bands to try recording the old school way. Tape recording gives a very specific organic raw sound and as you cannot edit tracks, it fixes a « moment in time». We like the idea that a song was played that way at that moment and your mood will affect the record much more than if it was digital. It makes it unique. Actually, some of them were played a bit faster or slower than intended but that’s how it works and we like that experience.

-Linked to that previous question, the unavoidable one: Covid 19 has had a tremendous impact, often for the worse, on the music industry as a whole and musicians in particular. How are you coping with its consequences? Were you able to play live in 2020? Anything planned for 2021?

When the pandemic arrived, we felt it like a front kick in the face really…we had a whole year of shows planned all over Europe and everything just collapsed. We are still trying to reschedule our shows but as promoters didn’t know how long the pandemic will last, it is really difficult to plan anything. At the beginning, we had hope for the end of 2020 but seeing how the situation has evolved we think shows will only start again in 2021. The consequences are tremendous for all the music scene and especially for bands like us who need to tour for a living.

Despite all this we try to stay positive and active, it is hard, but we are convinced that the Covid will not last forever. We knew that the second album would be released in the middle of that storm but we were ok with that. It’s our way to give our fans some comfort by showing them that we’re still here and the world hasn’t stopped either, even if it would have been more strategic for us to wait for the end of the pandemic for that release but we don’t care.

-I feel Nowhere Land is somewhat less “festive” than Crystal Gazer was. Is it just me? Is it a reflection of the times we live through? What would you say has changed between the two albums?

We wanted to focus the album towards something both oriental, brutal, and trippy at the same time. Using that middle-eastern sound to dig more into that “Oriental Fuzz” sound that we like to call it. It’s true that the album can be quite dark but that’s what came out during the writing sessions and we liked it that way. Maybe that is what has changed between the two albums, increasing the fuzz volume!

-What are your influences when composing?

It is kind of cliché to say that but the influences come from pretty everything we are sensitive to. From the discovery of new bands/songs we really dig, to a new effect pedal added. Even a movie, a conversation we had with the band, or our mood can influence what we write.

-I think there are not enough bands including the didgeridoo as an instrument. What is the story behind you using one in your music? Is it difficult to include?

I (Karim) discovered that instrument 6 – 7 years ago by seeing a street musician playing it in Montpellier and I instantly fell in love with that drone sound, it was dark and mystical. I bought a bamboo didgeridoo from him for a few euros just for the fun of trying a new instrument. Afterward, the didgeridoo turned out to be a very good one and I started playing it regularly for a year or two. I never really considered integrating it into a band as I don’t listen to didgeridoo music but one day, I tried to play both acoustic guitar and digeridoo at the same time. It turned out to be amazing and it gives me the idea to electrify and “rock” the whole thing up. Placing a microphone below, adding some reverb, overdrive, compressor, and picking my electric guitar instead of the acoustic. A new world opened. I proposed the idea to the band, and they liked it. I’m quite surprised to see that very few psych bands use it in their records. It has a really trippy/spacy sound, and a lot of effects can be added to it. I think it comes a lot from the lack of knowledge of this instrument. People may think that’s just for “tribal-like” music or whatever but it really has its place on the psych-rock scene. It’s tricky to use on stage because it takes up space and can cause a lot of feedback with the amps sound going through but we get used to it and we know how to shift its placement to avoid that.

-Can you tell us a bit more about how you ended up with your label, Stolen Body Records, from the first album on? Since you’re releasing Nowhere Land with them, I guess it’s a fruitful collaboration?

When we wrote our first album, we wanted it to be heard and spread as much as possible so going to a label was the best thing to do for us. We already knew Stolen Body Records as we listened to many bands from it and we really liked its spirit and the way they seemed to work with their bands. Their catalog is mainly focused on psych-rock/fuzz sound but it’s really diversified among the genre, so it seemed perfect for us. When the album was finished, we wrote an email to the manager to introduce ourselves and our music and he immediately liked the album. It is really collaborative, and every decision is discussed together. We have a good relationship going on and it was obvious for us that the second album will also be released on that label too.

Maybe we can add a message to all music enthusiasts: spread the love and continue supporting your favorite bands. Support your local music scene and if there is none, you can always create your own.

No revolution, Nowhere Land is in the direct lineage of Crystal Gazer, a unique mix of krautrock rhythmic, space psychedelia, and garage fuzz, with an oriental influence to crown it all. And a didgeridoo, which is definitely very nice for psychedelic music – more bands should get into it. This album is literally a trip, an odyssey to distant and desert landscapes populated by strange people. Strange to us, at least.

The overall tone and sound of the album are a bit darker than Crystal Gazer, sometimes provoking a tingling sensation of uneasiness. I’m going to go with the easy reference here, but it has a Lovecraftian feeling, like in At The Mountains of Madness: it conjures both wonder and anxiety. The lo-fi, entirely analog recording can probably explain a part of that. The voice too, often high-pitched when it does not erupt in primitive screams like on Falling Gods. The album has a lot of trippy/spacey jams, but it also has a lot to do with garage fuzz à la Oh Sees & co, moments of violent eruption of fuzzed-out guitar, still associated with motorik rhythmic, that make you make you want to get up and break something.

One song stands out a bit more than the others, and it’s Witch, the last one on the album, with a gloomier, doomish sound and feeling, but the album as a whole is coherent, and if songs differ in their composing or structure, they all share a similar feeling. Some may see in it a lack of originality, of risk-taking, I see continuity and consistency.

With Nowhere Land, Karkara confirms the test made with Crystal Gazer of an original band with a distinctive sound and, I hope, a bright future.