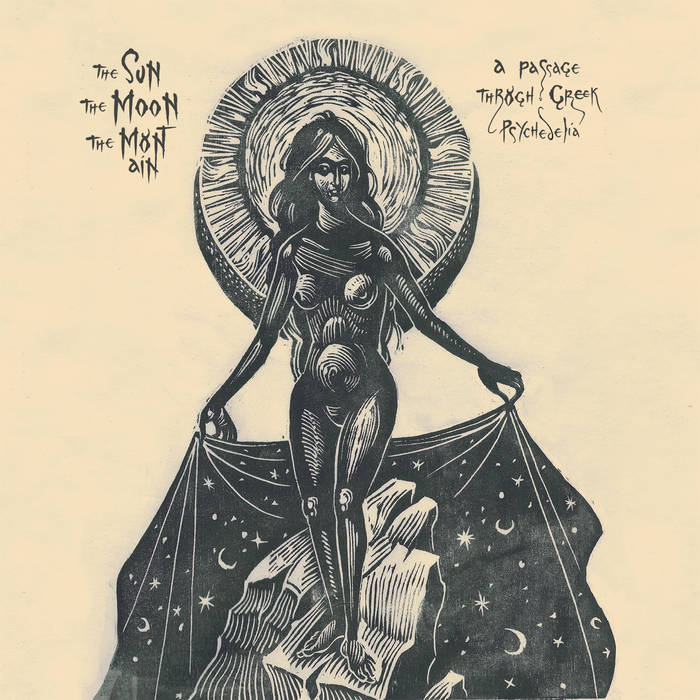 The newly born Greek record label Archaeopia Records managed to do a great job by compiling a list of songs for a collection that solidifies the up and coming Greek Psychedelic Rock division of the already established Greek rock scene. So in this LP you won’t see the gargantuan names of acts like 1000mods, Planet Of Zeus and Nightstalker but bands that have a less than a decade of presence.

The sound feels natural, almost pagan, but not raw. All the elements come from the Mediterranean and Balkan identity of the bands, which starts from the 60s, reaches its apex with influences by the legendary names of Aphrodite’s Child and Socrates Drank the Conium (check their Hard Rock with Folk elements album Phos produced by Vangelis), and finally has in its DNA every aspect of psychedelic rock (a bit of Beatles and 13th Floor Elevators, Led Zeppelin, Can), to blues and Americana, Stoner/Fesert and Post or sometimes Proggy stuff. The trip continues with the necessary Folk Rock elements. This collection is essentially the pot where the fermentation of Light and Dark takes place somewhere in the Aegean sea.

In the first side, we can see the collaboration of the Berlin-based Tau and Villagers Of Ioannina City, playing a folk/psych song melody with VIC’s personal element thrown towards the end, the Greek traditional clarinet.

Up next, The Road Miles play their version of psychedelia but in a more modern way with ethereal vocals in a track not new for this compilation but featured in the album “Ballads for the Wasteland”.

“The Flood” is a track that was released as a single a few days ago and if you checked Cyanna Mercury’s debut “Archetypes” then you‘ll be familiar with their approach and incorporation of Greek traditional elements, which is present throughout this song along with a heavy usage of keys.

The first side of the LP is over with Sleepin’ Pillow, where at first the listener may think that they don’t belong here with the electronic beats and almost trip-hop sounds that remind a bit of Nine Inch Nails but the eastern melodies within the song set the record straight and at the same time they prepare us for the other side of this LP titled “Mountain”.

It starts with Green Yeti, known for their heavy psych and space doom soundscapes and with “Monkey Riders” they cement further their position with the longest song on the LP with the slowest riffs! And

And finally, it ends with Craang’s full-on bass attack in a psychedelic turf that proceeds into prog and post melodies.

This collection solidifies the power that lies within the underground along with the special elements that make a certain scene unique. Local, “warm” Mediterranean elements like the primordial beliefs (like paganism etc), cosmic psychedelia, and mythology contribute to the rise of the fuzzy Greek underground scene.

While worshipping the Greek Gods of course 🙂