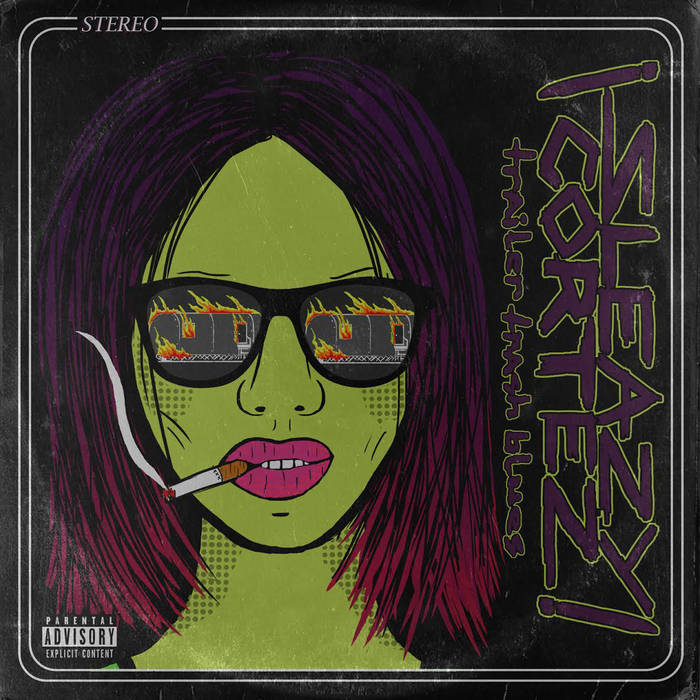 A Power Trio With More Fuzzy Groove And Confidence Than A TV Preacher !

The biggest reason why I love music is because talent trumps all. Impudence is king, and style cannot be bought, nor panache trained.

Growing up as a classical musician myself and never studying as much as I was required to nor ever going to a solo or orchestral practice knowing in full what I had to play, my only redeeming quality was my sound. No matter the hours of study others would put in the same passages, or how many more notes I would flunk, I had the sound. And they didn’t.

That’s something that came to mind while listening to Sleazy Cortez’s debut album. While there might be less going on, technically, and while there isn’t a wall of sound to be heard in the whole album, they show a superior musicianship and style many lack.

Sleazy Cortez is a power trio from Indio, Coachella Valley, California, and they sound like a power trio. But what they lack in decibels they make up in pure rhythm.

Dead Shuffle is a short opening track that will present to you Trailer Trash Blues’ very foundations: a rather fast rhythm present in most parts of the album, profuse use of changing tempo, playful use of stereo, and a powerful bass at the front seat.

On the contrary, Bud the C.H.U.D. is dominated by a psychedelic, spacey guitar that won’t quite come back for the rest of the album.

Vocals are not present in all of Sleazy Cortez’s Trailer Trash Blues, and we have to wait until its third track, MurderSexSpree, to hear Derek sing its tale of a murderous nymphomaniac. While I initially took Derek’s singing style as a way to cope with, maybe, insecurity about his singing, there is one instance where clean vocals are used in this album. Regardless of the motives, whether functional or stylistic, Derek’s vocals work, and they work beautifully with Sleazy Cortez’s brand and carefully thought production: oftentimes it feels as if the lyrics were being whispered into your ear by someone on your back.

A wise man once said: “There are two kinds of bands on earth: good bands, and cover bands.” Covering your favorite group’s best songs is one of those huge lies in life, a false friend if there ever was one. While it appears a safe bet for the uninitiated and young bands, every music lover worth its salt knows how hard and almost impossible it is to pull off. The fact that Sleazy Cortez decided to throw together Kyuss, Black Sabbath, and Clutch in a “loose medley of Clutch jammed into a Kyuss riff, with a familiar classic rock surprise at the end” and call it “just too much fun not to do” makes me feel validated in my rant about Sleazy Cortez’s panache and impudence. Big News And Mighty Scoop just makes it work, and that’s a really, really big “just”.

Sleazy Cortez then goes back to its sound in Walk Blues, playing with the same motif, letting it flow from one instrument to another in a way that reminded me of classical music – but I’m a weird cat –  and finishing off with a twenty-five seconds long drum roll in which Luiz doesn’t miss a beat, nor lets it get murky – my kind of drummer –.

From there we go into what I could swear is a ZZ Top-infused riff accompanying a tale of sexual debauchery through a series of very interesting rhythmic and tempo changes. Nick’s guitar handles everything with ease, as he does throughout the whole album.

Mountain Man and Backwoods Woman feel and sound like two sides of the same coin: while Mountain Man starts slower than the album’s average to then up its tempo towards the end, Backwoods Woman does the exact opposite. They are also, arguably, the most stoner-y of all Trailer Trash Blues’ songs, save for, perhaps, Big News And Mighty Scoop and Space H.

It’s interesting to note that the song less representative of Sleazy Cortez’s sound is Trailer Trash Blues’ penultimate track, also being the longest if we don’t consider Big News And Mighty Scoop, which I won’t, in this case, for obvious reasons. Save for its last minute or so, Space H. feels a bit Kyuss; although you could probably throw it into Rock Formations and many wouldn’t notice. It just goes to show you that Sleazy Cortez’s isn’t a one trick pony.

Considering that the band calls Trailer Trash Blues’ final track an “exercise” that “became an obnoxious way to end shows” and their “fans’ least favorite song”, I will refrain from telling you anything about it and let you be the judge.

A high-speed chase would do the trick.

You should really send them some love:

Be good and stay away from pop,