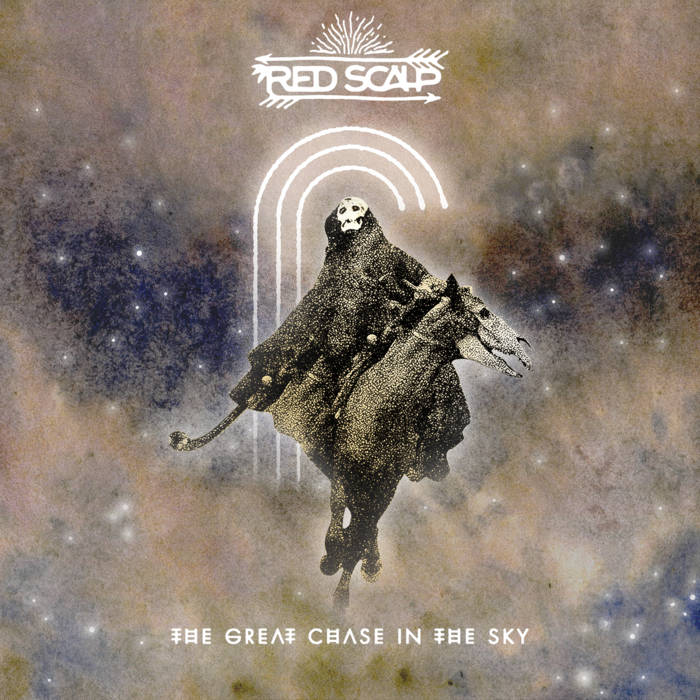 The chase is better than the catch.... Lemmy once said. I couldn't agree more.

The Space Indians are back with their 3rd LP after just about 2 years since they dropped the well-acclaimed Lost Ghosts album. Recorded at the impeccable Monochrome Studio, The Great Chase In The Sky is yet another Polish treasure unearthed on this musically-fertile land. If you’re into Sabbathian legacy full of twists, turns, sax and synths – you can’t let it slide. Yet, this newest creation of Red Scalp is versatile enough to soften even the most adamant of souls. If you let it, it will gladly take you on a trip high above into some fresh sonic landscapes… Where only Indian dance, dreams of space and riff worship can save you. Let me know when we’re good to go.

The whole album lasts for a bit less than 45 minutes and is split into 5 tracks of which the longest exceeds 11 minutes and the shortest falls just above the 4:20 mark. The variety in the duration of the songs helps to sink into the record without becoming a drag at any point. Additionally, the composition in The Great Chase In The Sky is dynamic and well-thought through as smooth transitions or sudden turns in between tracks help treating it as a cohesive whole. The general vibe of this record feels more ‘heavenly’ comparing to the previous albums and is interwoven with a greater degree of synth and sax work. In all that of course, the signature punchy and catchy grooves are still here and it seems that they are again the solid foundation on which all other wonders are raised.

The initial track, ‘Mothertime’, dropped just a few days ago as a single and gave us all a slight taste of what The Great Chase In The Sky might have been about. Opening with a rather moody synth line, the track rapidly cracks down to spill some riffage backed with pounding drums and the high intonation of Jędrek’s vocals. The last minute of the song is where finally Jan’s wonderful saxophone skills come into play bringing the track to its peak only to later dissolve simultaneously with the synthesizers into ‘Chase’, the longest component of this endeavor.

The second song of the album is perhaps one of its most interesting cuts. Red Scalp here initially tune things light and low, evoking a rather dreamy atmosphere that is swiftly transformed into a strangely familiar riff. Things get heavier, vocals come in and so the story goes. It’s worth mentioning that all instruments are interchangeably prominent throughout the length of ‘Chase’. Often there are moments where for instance 2 instruments are articulated and either fight each other for dominance or collaborate to bring the tempo to some incredible heights. The cosmic saxophone flying above all else like crazy or the rumbling Rick reminding everyone of who keeps it all upright. Everyone has a say here.

Following up comes ‘Sacred Space’, a track opening with this laid-back elegance and a touch of mystery to it. Bass hangs low, drums are patient, Jędrek cries out to some divine entities and guitar flies in circles being high on some spacey effects. Eventually, the shy sax joins to chill as well but not for long as the tempo suddenly shifts to a faster trajectory. Midway through the song, guitar cracks down with this highly saturated riff that later unfolds into a very Sabbath-reminiscent moment that is immediately taken over by a wicked synth solo. Things get even wilder when the same riff from just 2 minutes ago comes back but heavier and slower. Goosebumps guaranteed.

Moving onto ‘Gunsinger’, the vibe becomes more tribal as the restless drumbeats pave the way to some black magic pouring out of both Jędrek’s mouth as well his tiny Korg. Completed with unique chanting in the background and the cosmic, high-pitched synth noizes, the song goes on in a hypnotic manner being bombarded with some western-style shooting scene samples. Right at the end awaits a short dialogue that immediately brings us to the last part of this record.

‘Slide’ opens up with a bold bass line that is later faded out in favor of some hazy synth and guitar work. Though it’s the last story Red Scalp tells us here on this record, beware as it holds power to some highly contagious and emotional moments. As if the powerful chorus bellowing ‘I’m gooooiinnggg hooooome’ wouldn’t be insane enough, wait until you go past the 5-minute mark. Suddenly everything becomes quiet and a simple instrumental guitar riff takes the lead. Along comes the faithful bass, electric guitars roar back, drums join in and the track takes off to a yet higher level of insane. No stopping back! This riff-laden piece rapidly becomes accompanied by some astral noises and so continues until finally being completed by the saxo-sorcerer. The last minutes of ‘Slide’ are a divine mayhem that breaks free from any sonic chains and fears not to raise fire and clouds of smoke around it. And when you just thought you grasped what The Great Chase In The Sky was all about, it then manages to escape and reality returns to being as empty and hollow as it was before you gave this record a spin.

Red Scalp showed with The Great Chase In The Sky that they very much place emphasis on honing their sound and are restless when it comes to searching for it. Comparing to all their previous works, here we got a more balanced composition with all instruments playing equally important roles and cooperating better than ever before. Though the riffs here are not as inventive and groundbreaking as they’re fun, the fact that they’re constantly subjected to other instrumental intrusions or spacey effects makes them work. This album has some seriously great moments and its sleek production helps to appreciate all the little details and gems that the guys weaved into their tales of space, dreams and their approach to the Native American culture.

I hope you’ll enjoy their newest album and be sure to support them should you like it!

I could recommend spinning this record literally anywhere but I can imagine that a solitary hike on a nearby hill under cover of the night and bright stars, might just be the perfect setting. Just be sure to focus and let it sink in!

Their Methlab – The Last Second Review