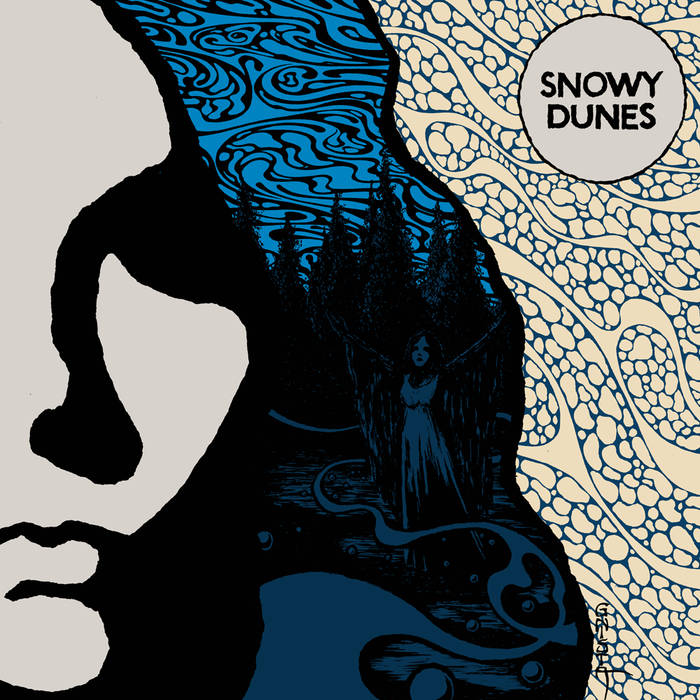 Sweden is a country that has quite the arsenal of stoner bands, and Snowy Dunes are now providing heavy artillery. They are Stockholm based Psychedelic Rock outfit founded in June 2013, consisting of members Stefan Jakobsson, Christoffer Kingstedt, Carl Oredson and Niklas Eisen. They describe their sound as “combining 60’s garagey psychadelia with 70’s riff-rock and a hint of love for the early 90’s stoner scene”. Their self-titled debut was released on May 8th 2015 on their Bandcamp page, and it’s quite promising.

This self-titled effort is a uniquely crafted contemporary Proto-doom release, using a fine blend of psychedelic rock from different eras. It feels as though it was recorded in one take from beginning to end, carrying a remarkable dynamic range and an overall sound palette that is very impressive for a debut. Each track is meticulously written, vintage-style psychedelic rock that is very loud at times and occasionally smooth and bluesy, although the groove is held high and never let down. The vocalist has a captivating and ambitious style, and even speaks to his band on the track “Diablo”.

Snowy Dunes cite main influences such as Pink Floyd, Black Sabbath, Earthless, Dead Meadow, Deep Purple and The Doors, and so naturally bring us very vintage and psychedelic vibes on their first record. The guitars, deliciously gritty, fuzz-injected and wah-overflowing, together with the singer’s raw emotion make it all more like a 1970’s time travel. Bluesy guitar licks are all over the place, the riffs are immense and the vocals are empowering. Snowy Dunes is a must have for 70’s rock and neo-psychedelia fanatics.

An hypnotizing 20 minute track titled “Atlantis, part I” was released on Snowy Dunes’ bandcamp page on January 13th, 2016 and is said by the band to be a prelude to Atlantis, their next second full-length album. “It was improvised and recorded live in one take to emphasize the feeling of traveling through the unknown.”

In the car, or at night.