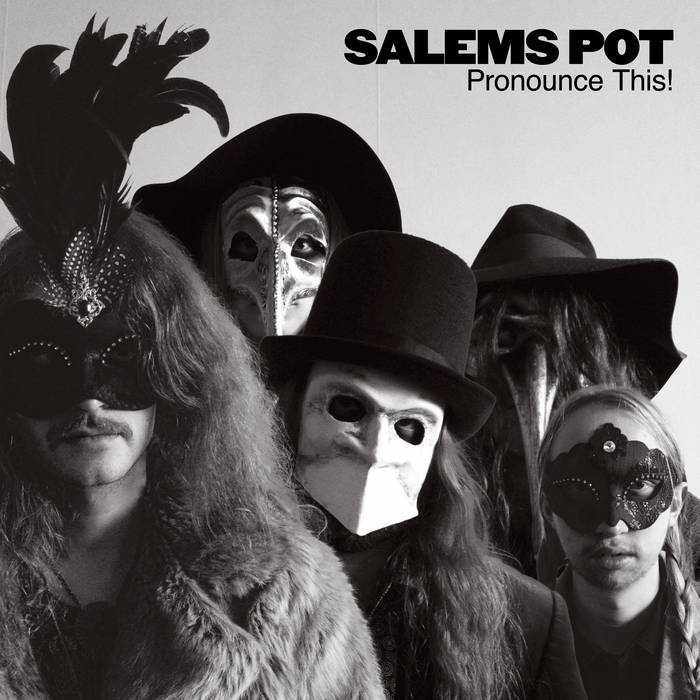 The Freakiest Play of the Year!

The demented Swedish heavy psych rockers are back with a second full-length that is set to melt your mind. After the release of their first LP, …Lurar Ut Dig På Prärien, the mysterious masked band did not stay idle for long. A few months after, they released a rather surprising single entitled Ego Trip which displayed some interesting experimentations in their sound. It was less doomy, more psychedelic and fast-paced than their previous materials.

The following month, they put out a great split with one of the biggest doom band around, Windhand. For this one, they came back to their old formula: the song was slow, creepy and hazy, like the nightmare of a tormented man. Fast-forward a year, and you get a glimpse of the new album with the single The Vampire Strikes Back. And boy oh boy, what a change!

Suddenly, Ego Trip makes more sense. What sounded like a couple of songs completely isolated from the rest of their materials was, in fact, the forerunner of what was to come.

The first thing you notice is the number of tracks: there are six songs, that is twice the number that was on their debut album. But that does not mean that they chose quantity over quality, far from it. Indeed, this album features some of their most well-written material to date.

Listening to this album is like attending a creepy masquerade ball where decadence and emptiness are celebrated. There is this distinct vibe that goes throughout the album, this constant idea of accepting one’s fate, of letting go because nothing makes sense. There is no need for a fight because it does not matter what you do or who you are, you are doomed. You might just as well embrace your fate. Indeed, the lyrics are pretty straightforward and self-explanatory: “Destruction has striked the divine, we might as well keep drinking ‘Cause we are already doomed – What once was to be our home is nothing more than a tomb”. You cannot really go more “doom” than that.

And the best thing is that the band turns all these feelings around and decides to have fun with them. There is a distinct cleavage between the gloomy, doom-oriented lyrics and the overall instrumental which is almost uplifting from time to time. This division also appears through the outfit of the band as they traded their creepy doll masks for something with an Italian vibe, hence the masquerade ball mentioned above.

The uplifting, catchy quality of their music is a new element that was not present in their previous LP but started to appear in their following releases and was polished in this new offering. It may be strange for a doom band but it actually  makes sense in the scope of this album. There is more variety in this one, it is not just doom with a psychedelic touch, as you will find elements of blues, folk, country and space-rock.

The first three tracks, Tranny Takes A Trip,  Just For Kicks and  The Vampire Strikes Back are a good mix of all those elements. But in that aspect, So Gone, So Dead is the one that stands out the most. Besides being the shortest track on the album (under four minutes), it is also a freakin’ acoustic song with a strong western vibe which reminds me a lot of another of their songs, Yer Doom, the b-side of the single Ego Trip. Seriously, who would have thought that the band who composed Sweeden and The Aquarian Age would play songs like these?

Moreover, humour can be found all over the album, from the beer can opening sound at the beginning of Tranny Takes A Trip to the title of the album (which is, I guess, a reference to the name of their first LP ...Lurar Ut Dig På Prärien). And although the lyrics deal with quite heavy subjects like depression, anxiety, drug abuse and societal issues, they are also quite ironic most of the time. They clearly do not take themselves seriously and this adds up to the general foolery that surrounds this album, a resigned man’s joke who has nothing to lose anymore.

Nevertheless, there are also tracks that will satisfy people in need of gloomy atmosphere. Coal Mind and Desire both hit the right buttons at the right moment. The first one is a twelve-minute instrumental track that could very well be featured in an old horror movie. It will also please any fans of Hawkwind with its space rock elements and even resonates with Pink Floyd followers as the progression of the song reminds a bit of Echoes. As for Desire, it is depressive as hell, pessimistic to the bone and crushingly slow – it is pure doom with synth elements.

During a cold night, with fresh beers and something to help you relax.

So Gone, So Dead