Samsara Blues Experiment – One With The Universe Review 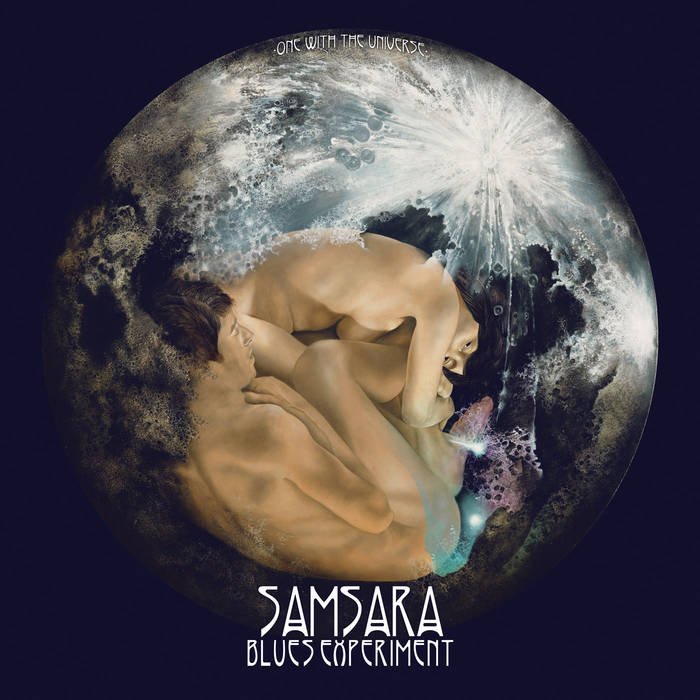 A massive injection of adrenaline that will keep you coming back for more !

Let me start by saying I’m profoundly addicted to Samsara Blues Experiment’s fourth album, One With The Universe. With all this gobbledygook I can easily expel from my keyboard, I’ll begin with this: It’s brilliant! And just like reading a book at the most perfect moment in your life, an album will present itself to you in the time you need it most. To discover our own perception of the paradoxical universe, consciousness, and being one — mindfulness and openness will reflect through our expressions, especially art. To understand the meaning of being one with the universe, is to know you’re a co-creator of The All. “The All is mind; The Universe is mental.” – The Kybalion

Berlin-based three piece rockers Christian Peters (vocals, guitar, keyboards, sitar), Thomas Vedder (drums, percussion) and Hans Eiselt (bass, percussion), all possess the magic key. SBE have always had their sound, and their lyrics always translate a spiritual vibration. However something has shifted. Bassist Richard Behrens parted ways with the band as a musician, but stayed on to record the album. Guitarist Hans Eiselt switched to bass. Christian Peters released a few solo experimental records under the name: Surya Kris Peters, most recently releasing Holy, Holy, Holy is an exploratory mission, a climactic transmutation of mastery, and a triumph of knowing the nature of the universe.

The attention to detail in this work of art starts with the album cover — two lovers intertwined and connected as one, creating a universe. One With The Universe is best when listened to in order, and in its entirety. It’s a climactic journey. It opens with “Vipassana” an electric symphonic arrangement filled with intention and purpose. Woven together by guitar, bass and drums, dipped in warm hypnotic keys and synth, while driven by an electric instrumental progression of bliss. “Vipassana” sets the tone and focused vision. Peters’ poetic words of mindfulness, consciousness, the realisation of non-self and what it feels like to just be. There’s a moment in the song when you can taste the laws of polarity through feedback-ridden guitar in reverse, soul-thumping bass, and a groovy drumbeat; powered into a heavy-psych jam, intensely fed by distorted vocals. Adrenaline is revved up.

One must efface oneself into “Sad Guru Returns” — an instrumental surrender of unadulterated progressive rock and psychedelic roll.

A drop of knowledge dispels out of the darkness with a blossoming sitar. “Glorious Daze” carries the momentum into an eastern band of gypsies-esk crescendo. The song is the bridge, the demarcation point of movement from melodic arrangement towards heavy heightened energy. Samsara Blues Experiment hooks you in like a drug. Their ability to activate all senses — increase heart rate, respiration, alertness is magnificent.

The climb continues. At this point in the album, if you haven’t been engaged and listening, something is clinically and spiritually off or just dead. Don’t panic, it could also be a symptom of only hearing, while adding to the shadows of subconsciousness. “One With The Universe” the title track, is when you want to dive in head first. To experience this song is to become harnessed in on progressive technique styles that change and mold us into becoming one. It’s certainly a mission. Eiselt’s bass is prominent and leads, delivering an odyssey of rhythm. Vedder’s primitive drums are eminent in trance inducing straight ahead beats and groove. Peters’ illustrious guitar moves from bluesy jazz, distortion space driven bending leads. The song’s changes are blended of intertwining keys and percussion. Piercing lyrics projected from the bard’s voice, emphasises a feeling to look deep into one’s spirit. “One With The Universe” has it all. For a while there, I considered this their best song.. until I continued my addiction for this album; and like all devote enslaved victims of wonderful sound, I discovered it only gets better.

Samsara Blues Experiment is a power trio that will bring Hercules to tears. Their final song brings me to my knees, as I bathe in the weeping pleasurable tears of joy. “Eastern Sun and Western Moon” is a conclusion to an album that I always wish for (in albums), and it fades into a silent explanation point ! Maybe it’s something I can relate to, or maybe it’s because I know we’re all one. The arrangement, musicianship, and lyrics are meant to be experienced. It’s the only way.

Something certainly transformed inside Samsara Blues Experiment and their sound. Maybe because Behrens (who is an absolute rocker) exited as a musician but staying on to record, Eiselt playing bass, Peters evolving deep in the world of synthesizers to name a few thoughts of why. Whatever catalysts propelled them — change is necessary in life, the universe is a paradox, and SBE have developed wonderfully within their cosmos. Attainment of One With The Universe’s grace is nothing less than the attainment of a divine grace which, in turn, is the culmination of all one’s well-intentioned triumph for sound. I trust that we’re all unconsciously searching for that next great album, well my friends, here it is. One With The Universe is a massive injection of adrenaline, an ocean of wisdomic pleasure that will make you go back for more.