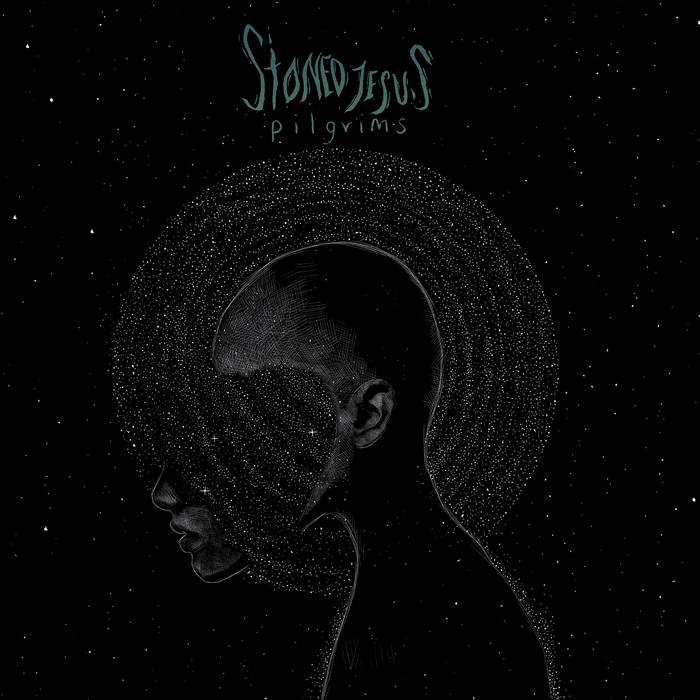 The Exact Same Thing as Before, Only Different

The fuzz-fueled Ukrainian trio Stoned Jesus are probably one of the more well-known outfits in all of stoner rock. They’ve been busily touring, writing, and rocking since their debut release, First Communion, all the way back in 2010. Their new album, Pilgrims, dropped on September 7th. Previews of the album bragged that Pilgrims “wasn’t your average desert session” and that “Stoned Jesus can’t be pigeon-holed.” If you’re already a fan of the band, then you know that these are both fair and accurate assertions, to be sure. I was a massive fan of Seven Thunders Roar, the trio’s second album. And Pilgrims definitely does stand up to the high standards of their previous work while also pressing ahead and forging its own identity.

Like a head-banging good time. In general, Pilgrims‘ rhythms are incredibly fun… and pretty catchy as well. The seven tracks offered on this album are certainly not what you’d call “fuzz-drenched,” but they definitely rock, showing some solid writing, hearty musicianship, and occasional flashes of brilliance. The songs are straight-forward enough that they welcome new listeners but never so predictable that they ever feel played-out or by-the-numbers.

The first single from the album, released at the end of June, is “Hands Resist Him“. It’s a fun track, but it is unsatisfied to simply rock a killer riff. Over the course of the song, Stoned Jesus will kick the energy up a notch by adding just a few notes to the backside to the melody. The musical effect is incredibly satisfying, and it was cool enough that it grabbed my attention while I was simply casually listening to the album, preoccupied in the mundane task of cleaning my basement. “Hands Resist Him” is Stoned Jesus rocking like only Stoned Jesus knows how to.

The second single, released in the second week of August, has been a little bit more divisive for fans of the band. “Thessalia” is a classic grunge tune, and it sounds more like something from Nirvana‘s playbook than it does Stoned Jesus. The vocals on this song are clean and dry, almost to its detriment. And while the song does have a killer groove and a pounding progression, it may come as a surprise to SJ fans looking for simply “more of the same” who are unwilling to allow a group room to grow.

“Distant Light” is a standout song, to be sure. And, not being a single, it hasn’t gotten any press. The nearly seven-minute track starts fairly slow and teases a sudden burst of energy, but waits until the final minute-and-a-half to finally fulfill its promise, exploding in a sudden, aggressive wail of energy. Rocking stuff.

Long story short, Stoned Jesus has dropped another winner of an album here, but bits and pieces of it may be a little different than what you’re expecting. There’s enough classic Stoned Jesus material here to keep an old fan happy, but there’s a bit of experimentation as well. But assuming you’re not already a fan… if you’re just someone who’s been hankering for a juicy, heavy slab of fuzz-tinged rock ‘n’ roll, and you’re willing to keep an open mind, you may just want to make sure Pilgrims is at the top of your menu.