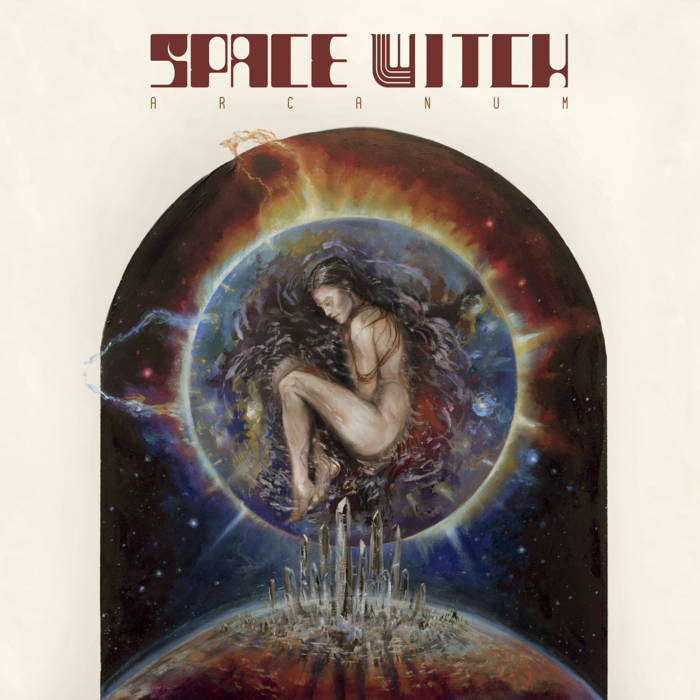 Beware! You're now under the Cosmic Spell of the Space Witch!

There are so many witches and spaces in our lives, so many band names with those two words, then in this band – those two magical names come together as a great team, designed to deliver a very complex, odd timed and psychedelic batch of songs, yet still tight fitting inside the Stoner/Doom box.

The first part of the opening song sounds a lot like Comacozer (reviewed last year here) in their very trippy and spacey sound. This instrumental song goes from a nice soothing mood to a heavy distorted rumpus, sitting on a very psychedelic mood, slowly paced torture.

It doesn’t take long until the prime listener perceives something different in the background. Space Witch make use of an unusual arrangement idea, not traditionally observed in the stoner/doom/sludge world: Electronics! There are other bands that employ these kinds of arrangements, such as the oddly named band “Mammoth Weed Wizard Bastard” for instance. However, Space Witch take this so seriously that they actually have a member of the band only for this sole purpose of producing electronic waves and psychedelic background noises. The usual me would complain about these sounds, often categorized as annoying noises, but this didn’t happen for Space Witch. Even though these electronic high pitched dins are constant, they’re not irritating or bothersome, and they really add up a very distinct atmosphere to their music. But, if you can’t stand them, the bad news is that they fill the album with their high-tech effects almost ubiquitously, as well as seen in the first album. In other words, these noises are not an experimental feature, they were very present in the first album, and they were expected to be there in the second album as well.

The composition of the music still matches the formula used in the first album, the songs are traditionally divided in specific phases, but in this effort, the phases sound a lot less glued down from other riffs of other songs, as they used to throughout the first album.

The second song – “Astro Genocide” – could be considered a milestone in Space Witch’s career. First because it takes of the “instrumental” musical tag from the band. Their debut album is completely instrumental (obviously not counting the spoken intro), in this one – halfway through the second song – some creepy vocals comes up, surprising the ones who were already familiar with the band with some very unusual, original and weird vocal lines, almost being recited as if they were declaiming a horror poetry. Second milestone reason is that by the ending of the song, the prime listener will become shocked with a wave of death metal riffs and blastbeats completely out of the blue. That was COMPLETELY UNEXPECTED, and they deserve proper recognition for their originality merits!

The third song is definitely my favorite, the lyrics are about our star, the sun. “Hex Solaris” is another song with vocals, even better placed than the previous song. I’ll always remember that I listened to that for the first time when I was away from home, in the middle of nowhere (with a powerful battery powered stereo), and the way it sounded totally blew my mind. The song starts with some low noises and bells, soon enough to be covered up by the heaviest riff, whereas the odd timed instrumental makes a solid bed for the amazing vocal lines, yelled at the top of the lungs sounding heavy and dominant as it came straight from Satan himself, so freaking deeply heavy and angry, ugh! The delicious and creamy filling of this song features a very psychedelic keyboard as if it was welcoming you to the machine, if you know what I mean. Yummy!

At the curtain call, the song “Battle Hag” is another instrumental piece that has its heavy moments, but ultimately drives you again into the psychedelic world, with a very sticky melody, powered by the mighty keyboards, until the album is through.

Overall, “Arcanum” is a masterpiece that floats on the ocean that the stoner world is. Space Witch already showed in the first album that they are experienced musicians, that they are brutally heavy as an anvil yet tripping high as a kyte, and they surely know what they’re doing there. They also fulfil the expectation that any fan would have for the second album of a band: a positive growth, an evolution higher and brighter than the previous one, yet not sounding pretentious or overemphasized in any way.

I can’t wait for my copy to arrive and I’m pretty sure that, if you did like the words in this review, after listening to it you’ll be counting down the days until the mailman delivers you a big flat package to your home, containing a round black object with a tiny hole in the middle. Enjoy!