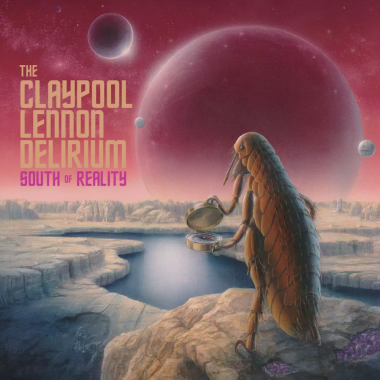 What happens when a musical legend plays with a psychedelic heirloom ?!

‘Immaculate’ comes to mind when I think about the collaborative duo of The Claypool Lennon Delirium. Kindred spirits of the cosmic universe. Who would have ever imagined that the veteran madman Les Claypool, who slaps, tapping, whammy bar bending, flamenco groovy strumming, baroque sound intertwining, leader with a bass, would one day join forces with the multi-instrumental psychedelic heirloom Sean Lennon? After their debut album Monolith Of Phobos, anyone who adored psych-rock of the ancients, became instantly hooked.

Some may find it somewhat annoying, maybe even insulting when we try to categorize the sound of musical creators, and relate them to a comparison we’re familiar with. Obviously, it’s only natural to do so, and I’m sure we’re all guilty of it. I guess the best way to describe the Claypool Lennon Delirium sound, is by listening to their follow-up EP Lime And Limpid Green. Four masterpiece covered songs which are Syd Barrett/Floyd’s “Astronomy Domine,” Entwistle’s “Boris the Spider,” King Crimson’s “The Court of the Crimson King,” and Flower Travellin’ Band’s “Satori Part I.” The culmination of those four songs say everything, not to mention they are brilliantly covered.

South Of Reality is the third recorded album (second full length), and it exceeds all expectation of how classic psychedelic music warp our thoughts and free our minds ! The very clarity in this album’s production articulates whispers from chanting extraterrestrials. It’s belied deep in our audio familiarities, for the ear predicates the future of something more luminous than an unshadowed altered state from the past, and in the audial freedom of such landscapes, all preference is made whimsical through South Of Reality, while Claypool and Lennon become musically endowed as unguessed kinships.

South Of Reality enters an awaken consciousness with brilliant musicianship, and the subconscious dreams of its satirical laughter. I’m guessing that those who have never listened to The Claypool Lennon Delirium will expect an album lead by Les Claypool’s bass and voice. I have a sneaking suspicion that South Of Reality will enter more homes than their debut album Monolith Of Phobos. Don’t sleep on Sean. He shouldn’t be overlooked or rather overshadowed just because he’s the spawn of one of the all time most influential songwriters ever.  Sean Lennon is a multi-instrumentalist, and a damn great one at that. His guitar style is completely underrated on any who’s who conversation list. His voice is also special, and it is to be celebrated.

This sophomore recording is intelligent, psychedelic, beautifully composed, and masterfully recorded. Every single song has its own personality. The song lineup is on point. The sound production and editing is phenomenal. The intertwining magical mystery voices and multilayered acid-influenced demonic noises become calculated rhythm. For example, the album opens with “Little Fishes” and out of the gates, playfully smacking us across the face with backwards (sounds like) esoteric satanic verses. The combination of wonderful musicianship and satirical lyrics set the tone for this album.

Then they follow up on a quizzical tale with “Blood and Rockets – Movement I, Saga of Jack Parsons – Movement II, Too the Moon.” Their title track “South Of Reality” is charged, lead by Les’ voice and bass. “Boriska” enters a prog style, and ballad moments. “Easily Charmed by Fools” is another playful mockery brew of ‘they’ who are fooled by fools, who drink ample amounts of fool-aid.

Now we enter the realm of no return. The backend side of this album rules (.)! “Amethyst Realm” is in my humble opinion their greatest song to date. It’s a drive in your car and crank the stereo loud kinda song. It’s a climatic journey. Sean Lennon’s guitar solo is perfect! It’s just right. He delivers a set-up solo, the song moves through its progressions, and then bam. The solo embodies progressive clean movement. Les furnishes it up with a heavy bass time measure, and Sean takes off with sometimes Zappa-esque groove. Next is “Toady Man’s Hour”. This is one of those songs where many people consider Les Claypool to be one of the all time greats. It has elements of psych-rock, ska, reggae, and power vocals. “Cricket Chronicles Revisited – Part I, Ask Your Doctor – Part II, Psyde Effects” is a fantastical journey with baroque execution. The changes throughout the song are alluringly unconventional. The song segues out with probably the coolest satirical nod to ‘ask your doctor side effects.’ South Of Reality closes with a funky rapture “Like Fleas”.

The derangement; the madness and insanity of this duo is beyond clever! South Of Reality is bright, intelligent; it’s pure mind alteration psychedelic rock & roll.

Primus, The Ghost of a Saber Tooth Tiger (GOASTT), Oysterhead, and The White Album by The Beatles