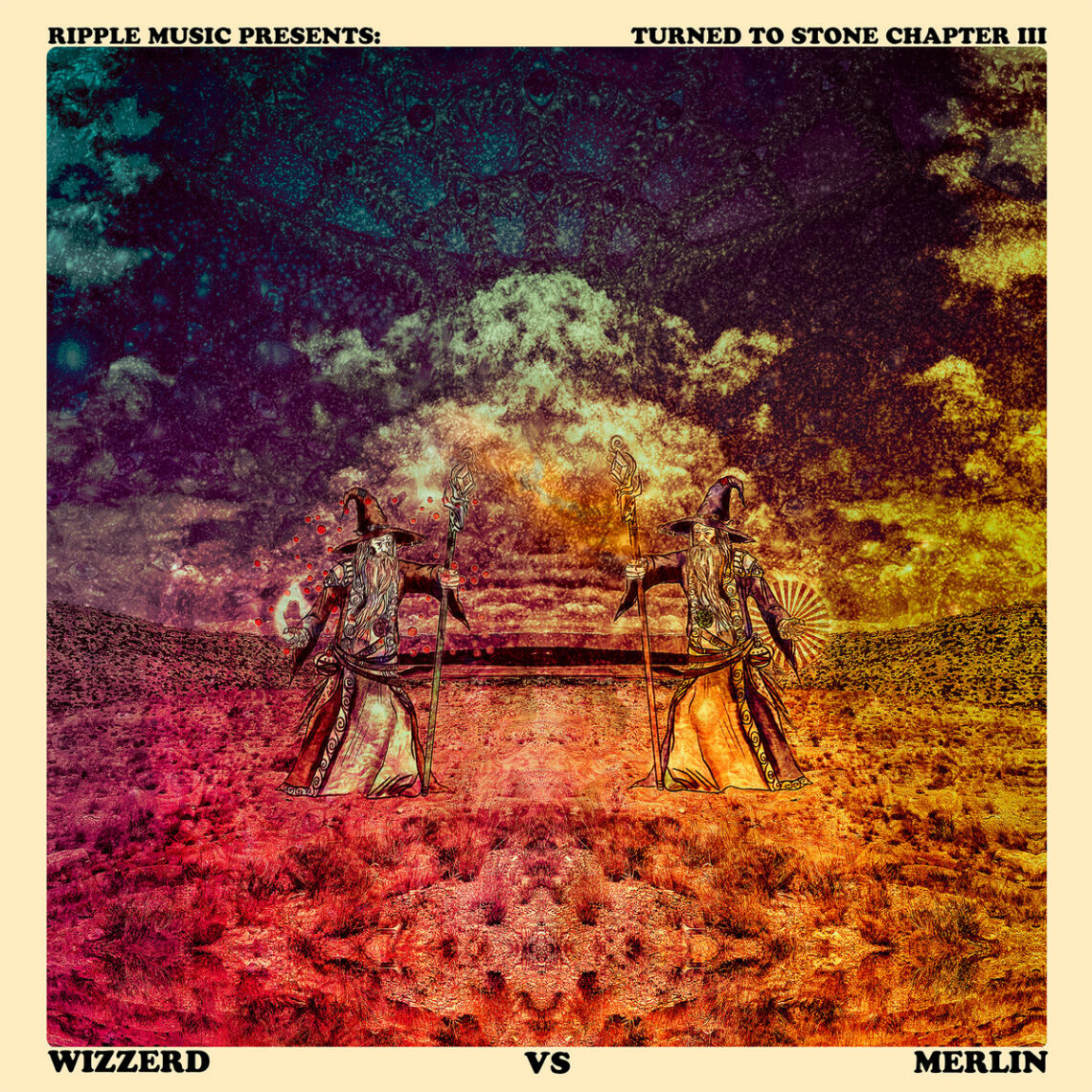 I guess it was eventually inevitable, after a couple of years of raging meme wars on socials, the two American bands finally got together on a record. Ripple Music keeps enchanting us with their “Turned to Stone” series, and brings us an epic wizard battle for this Chapter III.

Merlin got everyone’s attention three years ago with their fourth LP The Wizard, a gem full of amazing stoner jams and saxophone. One year after, Wizzerd released their self-titled second album, a blend of Stoner and Doom deeply rooted in the holy 70s. They joined forces for a friendly duel in this kickass split LP, released last Friday, and it’s so good I couldn’t stop coming back to it since then.

It starts with three minutes and a half of calm intro, some noises setting the scenery in the woods, an appealing acoustic riff and some mystery whispering preparing us for what is about to come. Wizzerd kicks in with a proggish stoner riffage spacing out, melting into a nice solo before the 5min mark.

They take a little break, changing the rhythm to bring the doom side of their sound, with this characteristic style of singing, taking time to express it. This voice always makes me think of when I put a 45 record at the wrong speed, though here, it fits perfectly. A super nice bridge follows, coming back to the proggish riffage of earlier and exploring around it, with some clear Pink Floyd influences. Once again, they take the time to wander, bring a longer solo, while building some intensity around it, just to let it come back down for a bit of frustration.

The guitar picks up a marching riff, and the others join progressively, only to explode into full riffage mode again, crazier than before, and launch it on orbit. After letting it resonate for a while, giving it a jam feeling, the bass and drums come back to a simpler and more steady rhythm. When you would have expected them to find a new way to get back up, they just cut it, to bring back the smoothness of the intro and dig it a bit more, drifting nicely along with the mandolin and sitar towards the end of the track.

Merlin‘s intro is quite contrasting with Wizzerd‘s, barely a minute of dark synths, suggesting you’re entering the foul realm of an evil wizard. And this feeling stays, Merlin comes at us with a wicked Arabrot vibe, with killer lyrics (head over Merlin‘s Bandcamp for it). This part is a pure doom cliché, which, along with the lyrics, expresses perfectly the band’s view on some of the Stoner Doom scene, and their unfathomable desire of messing up with the listener’s expectations.

Talking about that, are you ready for some groovy stoner funk? Because the ‘Forest of Funk‘ is coming at you, with a blazing groove and enchanting percussions that can’t leave you unmoved. There’s even some flute that might bring some of us back to Jethro Tull. The stoner takes over again for a couple of minutes, still with lots of groove and funky synths layers. But the funk isn’t done with it (yes, this is a stoner vs funk battle in the middle of a wizard duel), so we’re in for another booty-shaking moment, in another way, that will eventually melt into synths and guitars droning out.

The groove comes back, but as a cybernetic version, kind of disco clash, in a way I only heard from Rinôçérôse (who got known through their soundtrack of the iPod commercial). At this point, if you’re not sold to Merlin’s genius, I don’t understand. They tweak it gently, melting it with some sort of electronic ambient, to transition to the last part. As the title of this part suggests, it is strongly rooted in Pink Floyd’s sonic universe. So rejoice for ‘Atom Heart Merlin Suite‘, four blissful minutes of Floydian cinematic wholesomeness.

This battle of wizards is over, but you can play it over and over again, it only gets better every time! As Wizzerd explored extensively their sonic universe, building kind of an ultimate Wizzerd track of Proggish Stoner Doom glory, Merlin did what Merlin does best, giving us everything we could ask for, and lots of what we wouldn’t even think to ask for, in the same track, stoner doom heaviness, funky grooves, disco, and Floydian psychedelia. Hats off guys, and thanks a lot to Ripple Music, you gave us a stunning battle to remember!

Wandering through the woods, in search of spell components for your next wizard battle.

Links to the bands