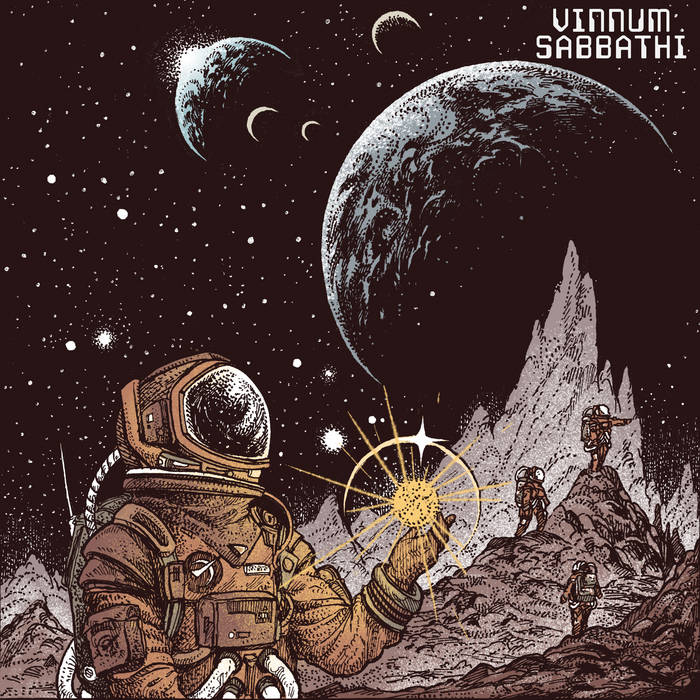 Science, space and riffs belong together

Of Dimensions And Theories by Vinnum Sabbathi is a wholesome narrative to a concept where humanity is capable of intergalactic conquest yet suffering from various self-imposed catastrophes. It is the band’s 3rd official LP output and this time revolves around the theme of 4 cosmonauts sent to outer space in order to acquire groundbreaking data needed for human survival and planetary expansion. Fully instrumental, heavily dependent on samples and rich in mystery, this album is a worthwhile plunge into realms of sonic science fiction. It’s time to suit up and head for the orbit…

To begin with, the album has no vocals per se, however each track has an intricate sample sequence that helps to guide the listener’s imagination towards Vinnum Sabbathi’s secret dimension. The sonic contrast between darkness and light is actively present and is a direct reference to both hope and doom associated with the unprecedented mission. There are 2 sides of the coin where both the music and the samples are key components to comprehending the seemingly cryptic vision of the future.

Of Dimensions And Theories begins with “In Search of M-Theory” where a narrator introduces the listener to the technological and scientific prowess of the current times. Simultaneously, the slowly enfolding instrumental trio of guitar, drums and bass gradually gain momentum and eventually rain down as the background voice says: “Welcome to the Age of Mastery”. The second half of the track feels more rabid and droney with samples shining light on the imminent ecological collapse of Earth and the aforementioned mission itself. What follows is “Quantum Determinism” where the scientific realm exclaims its fanatic optimism regarding the cosmic expansion. The tempo of the song is yet again rather sluggish at the beginning but now additionally evokes malice and pride as if implying that the scientists’ proposal is the only step forward.

The story continues with “An Appraisal” that is perhaps the simplest track of all 6 as it merely consists of two elements. A continuous and rather timid acoustic riff that leads the way and a few separate voice samples in languages such as French, English or Russian. The song on one hand feels peaceful but on the other quite unsettling as the lyrics express people’s hopelessness and frustration about the future of Earth and the human race. However, the somber atmosphere doesn’t fade as it is being picked up again in “Beyond Perturbative States” and amplified with an immense amount of fuzz, reverb and overall distortion. This is where the album resorts to brute force and is highly reminiscent of the blunt heaviness of the band’s debut LP, Gravity Works.

Closing the record are two twin tracks: “A Superstring Revolution I” and “A Superstring Revolution II” both of which have sample lines where the spacecraft’s crew communicates with the Mission Control Center back on Earth. The story seems to come to an end as the astronauts approach the so-called “Symmetry Zone” and the unknown lies ahead. Musically, the songs are dynamic and balanced in terms of volume, however they also seem to be bereft of groove in favor of simply repetitive instrumental sequences. Depending on the level of the listener’s engagement, I can imagine some can greatly appreciate this heavy, psychedelic conveyor belt while some might deem it as too much of a drag. What is definitely a highlight of those tracks is the space they are given, and the tense atmosphere created by both the impending sonic doom and the anxious radio communication samples.

Of Dimensions And Theories is yet another precious gem on the shelf of instrumental doom. Its dedication to the themes of science, human nature and mysteries of space is visible as the album was crafted with a clear concept in mind. It takes a bit of attention and focus to follow the verbal side of the story, but the music surely helps as it is as cryptic as some of the samples themselves. And while some of the record’s cuts are repetitive to the bone, this approach helps to get the hypnotizing message across and contribute to it being droney and endless as space itself. Vinnum Sabbathi showed us again that their space-driven, riff-worshipping machine works just fine and that even black holes are no longer a limit, but an opportunity instead.